Allegiant and Spirit report highest operating margins among US carriers

US carriers bring in USD1.9bn in ancillary revenues in 1Q2010

Also in the first quarter, the carriers reported ancillary revenues of USD1,857 million including USD769 million in baggage fees, USD554 million from reservation change fees and USD534 million for other ancillary revenues (such as seating assignments, IFE, onboard F&B and entertainment, frequent flyer award programme sales and pet transportation).

Looking at revenues, but at a unit level, the LCCs reported lower unit costs than their network and regional counterparts, with a combined average of USD 10.8 cents, compared with USD 14.6 cents and USD 12.3 cents, respectively. Southwest reported the highest unit revenues in the quarter, at USD 11.6 cents, with Frontier and Virgin America on the lower-end of the spectrum, with unit costs of USD 8.4 cents and USD 8.3 cents, respectively.

LCC average yields were the same at the regional and LCC levels, at USD 12.6 cents (network carriers reported average yields of USD 16.3 cents). As was the case with unit revenues, Southwest reported the highest yields among the LCC segment, at USD 14.1 cents, while Allegiant and Frontier had the lowest yields, of USD 9.5 cents and USD 8.1 cents, respectively.

Unit costs were the lowest at the LCCs, at USD 10.6 cents, compared with USD 11.8 cents for the regional carriers and USD 14.7 cents at the network carriers. Southwest had the highest unit costs among the LCC group – at USD 11.4 cents compared with USD 9.9 cents in 1Q2009 and USD 10.8 cents in 4Q2009 – although this was still lower than the lowest unit costs among the network carriers. Spirit and Allegiant were the low cost leaders in the quarters, with average unit costs of USD 8.8 cents and USD 8.7 cents, respectively. 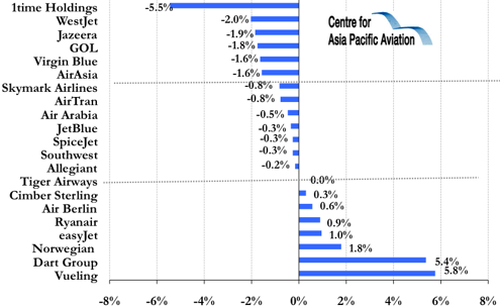