Shares in US LCCs were all strong yesterday, with shares in JetBlue, Southwest, Allegiant and AirTran gaining 1.3%, 1.4%, 1.6% and 2.6%, respectively. Shares in Canadian LCC, WestJet, were also higher, up 2.6%.

Overall, US scheduled passenger airlines employed 2.4% fewer workers in the month, marking the 24th consecutive decrease in FTE levels for the scheduled passenger carriers from the same month of the previous year. However, the June FTE number was the highest since Jan-2010.

Meanwhile, shares in Brazilian LCC, GOL, gained 1.8%. The previous day, the carrier (which ended the day 1.1% higher) witnessed its biggest intra-day tumble since 06-May-2010, slumping 7%, on news of the LAN-TAM merger, before making a comeback in afternoon trading. The merger provides somewhat of a challenge for GOL, as LAN will now be looking to grow in Brazil. 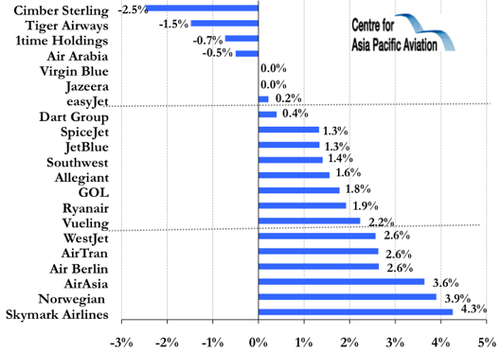