The US government has formally stepped in and arguably set a dangerous precedent concerning the new business models being adopted by some of the Gulf airlines in rejecting a request by Air Serbia (formerly JAT) and Etihad to codeshare on service to the US.

The troika of airline lobbying group Airlines For America (A4A), Delta Air Lines and the Air Line Pilots Association formally opposed the request on what is now familiar grounds – arguing the Belgrade-Abu Dhabi–US routings are unviable for the consumer, Air Serbia’s new ownership (Etihad formally took a 49% stake in Jan-2014) is suspect, and the absence of a bilateral agreement with Serbia.

While debate will continue on the merits of the arguments offered by both sides, perhaps another underlying element is Etihad’s and Air Serbia’s plans to bolster the hub at Belgrade. The build-up in Belgrade adds a new competitive dynamic in Europe, one unsavoury to established network carriers within Europe and US airlines serving the continent.

Air Serbia petitioned the the US Department of Transportation (DoT) in Sep-2013 for the right to serve the US through current or future codesharing partners, explaining initially it would place its code on Etihad’s flights from Abu Dhabi to JFK, Chicago and Washington Dulles from connecting service between Belgrade and Abu Dhabi.

Unsurprisingly, the reactionary combination of A4A, Delta and ALPA strongly opposed Air Serbia’s request, arguing the proposed routing from Belgrade to Abu Dhabi onward to JFK could add 8,046km of additional circuitry, which the parties counter is not a rational service option that produces any consumer benefit. This was an intriguing argument, aimed at taking such an obvious judgment out of the hands of consumers; the fact that it was such an obscure issue only made the sledgehammer attack more beguiling.

Delta highlighted connecting service between Chicago and Belgrade via Amsterdam (a hub of SkyTeam joint venture partner Air France-KLM), Munich, Frankfurt (both hubs of Lufthansa) and Vienna on routings that are far less circuitous than those proposed by Air Serbia and Etihad. On a seat deployment basis, Lufthansa is Belgrade’s third largest carrier in international markets, holding a 7% share. 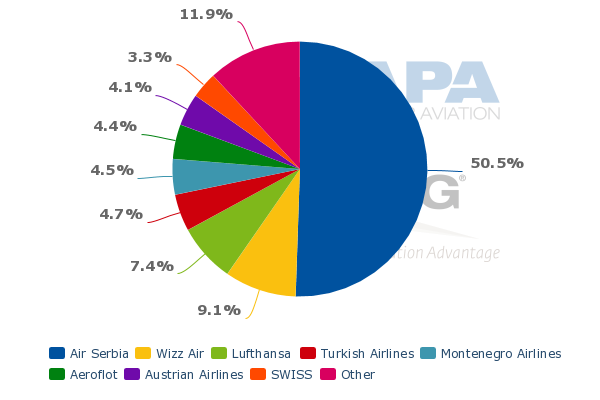 Delta argued that “it is highly unlikely that a rational consumer would seek out itineraries via Abu Dhabi unless fares were artificially low, i.e. unless JAT and Etihad plan to engage in capacity dumping at below market fares”.  That is a not unfamiliar argument offered by Delta, which postulates that the Gulf carriers, because they are government owned (a feature they share with many of Delta’s SkyTeam partners), are inevitably heavily subsidised by their respective owners.

Then, with a logical leap of faith, this accordingly allows Etihad, Emirates and Qatar to exhibit the sort of uncommercial behaviour Delta ascribes to them. (In reality the Gulf airlines are among the most cost-efficient in the world and, in Emirates’ case, the airline has paid its owners a dividend – “profit” – of nearly USD3billion over the past three financial years. Hardly the stuff of government-subsidised discounting.)

But meanwhile this relatively minor application, having created such a massive reaction, has produced an outcome that harkens back to the baddest old days of regulation. In those less enlightened times, government took the position that it knew best what was good for consumers. In 2014, most people outside trade associations and pilot unions, would support the concept that consumers be allowed to decide the most appropriate routing they wish to fly. Logic would dictate that more route options and price points are better for consumers than fewer.

The two remaining points of contention among the opponents of Air Serbia and Etihad’s US codeshare were the lack of a formal bilateral between the US and Serbia and the prospect of Air Serbia coming under control of Etihad’s management after Etihad’s minority shareholding was in place.

Air Serbia’s ownership was the sticking point influencing DoT’s ultimate decision to reject the carrier’s application to codeshare with Etihad on US flights. Absent a formal bilateral between the US and Serbia, the DoT explained it must use its discretion to determine if Air Serbia’s request was in the public interest. The department concluded that “we are faced with certain critical elements, centering on the issue of JAT’s ownership and control, that are unresolved on the record”.
DoT concluded the allegations raised by A4A, Delta and ALPA appeared to be supported by publicly available statements made by both Etihad and JAT, “that notwithstanding Serbian retention of majority ownership in JAT and representation in its organisation structure, Etihad will likely nevertheless wield extensive control over JAT’s day-to-day operations”.

Etihad and JAT/Air Serbia were unsuccessful in their efforts to convince the department that the arguments of their opponents were invalid as DoT concluded: “In the face of these specific, concrete allegations that cast serious doubt on its statements regarding ownership and control, JAT merely responded with generalities and reiterations of earlier assertions that do not adequately refute these allegations.”

The thrust of Delta’s ownership argument was that Etihad was exerting significant control on Air Serbia beyond the 49% ownership stake, which would allow Etihad de facto control over Air Serbia. Delta used the five-year management contract of Air Serbia awarded to Etihad as the basis for its de facto ownership concerns.

Delta in its arguments ticked off all of Etihad’s acquisitions during the last few years, and Air Serbia is by far the largest stake Etihad has taken in a carrier. But Etihad developed its so-called “equity alliance” strategy when the leaders of the three main global alliances actively opposed its expansion.

In a short period of time Etihad has amassed a portfolio of six carriers in which it has taken an equity stake (Jet Airways is still pending), and has unapologetically stated the benefits of its equity alliances include streamlined entry into new markets with foreign investment limits, expansion through established brands, and joint purchasing.

Etihad’s strategy is now giving birth to a model that is attracting global industry attention, given its strengths in terms of tailored market responses – which in many ways have the potential to operate more effectively in the interests of airlines and consumers alike. Indeed, a US aviation publication which has recently crowned Delta the airline of the year, has simultaneously awarded Etihad for its “Airline Market Leadership” - hinting at the past and the future.

The scrutiny Etihad receives begs a crucial question – if another carrier that was not subjected to self-interested accusations of government support were to adopt a similar strategy, would the reaction be the same?

Delta for example recently acquired 49% of Virgin Atlantic and now operates over 180 codeshare routes on the British carrier’s behalf; the relationship is to grow into a “full joint venture” according to Delta. In the circumstances, it is unlikely that Virgin will be operating wholly autonomously in a JV with the world's largest airline – the point being that the judgment on “control” has many shades of grey.

In such circumstances, it would arguably, as a matter of public policy – as opposed to industry protection – be preferable to default to a position where the consumer/public interest prevails.

Expansion at Belgrade could ultimately threaten airlines in Western Europe

DoT’s decision also reflects the tremendous efforts US carriers are putting into blocking expansion of Middle Eastern hubs. During the winter 2013/2014 season, Air Serbia plans to introduce 12 new routes from Belgrade – Abu Dhabi, Banja Luka in Bosnia Herzegovina, Prague in the Czech Republic, Bucharest in Romania, Ljubljana in Slovenia, Beirut in Lebanon, Cairo in Egypt, Kiev in the Ukraine, Sofia and Varna in Bulgaria and Warsaw in Poland. 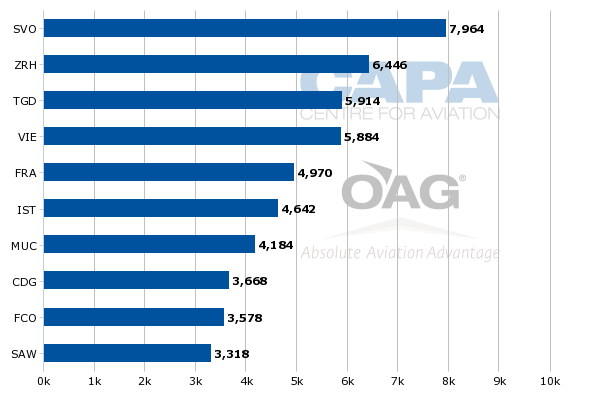 Despite the backlash, other US carriers continue to embrace the Gulf airlines...

It is clearly no surprise that opponents of a Belgrade-Abu Dhabi-US routing were successful in convincing the DoT the route was not in the public’s best interest. But aside from those opponents there are US carriers that are partnering with the Gulf carriers as a matter of prudent strategy, to improve their network breadth. American has close relationships with both Etihad (codeshares) and Qatar (via oneworld), and days after the DoT rejected the Air Serbia-Etihad codeshare, JetBlue and Etihad completed a codeshare deal (JetBlue also codeshares with Emirates and Qatar).

While US carriers can rightfully cry foul over unfair taxation by the US government, the country’s largest airlines still have considerable sway in terms of protecting their commercial interest from what they deem as unfair encroachment by the Gulf carriers. Even as those carriers cry foul - with some success in their attempts to close off the US market - Emirates, Etihad and Qatar’s growth globally and into the country continues largely unabated.

And while the largest carriers in the US continue to dismiss their worth, other airlines in the country are recognising the connectivity the three Gulf carriers offer on a global scale. No one can predict the ultimate result, but even as the US government and its large carriers hold strong to protectionist ideals, Gulf carriers are finding ways to spread their wings.

For legacy airlines there have typically been three stages of comprehension in the saga of the Gulf airlines, as they intrude on historic markets: first the denial stage; second the struggle to resist, using all the old protectionist armoury; then, finally, reconciliation and recognition that these really are the “market leaders” – that the future is not in relying on 70-year old regulatory shackles, but in removing them.

Delta’s main international partner in SkyTeam, Air France was one of the strongest proponents of the second stage; today it is increasingly deeply engaged with Etihad. It surely won’t be too long before Delta moves along the evolutionary line too.