Airline stocks moved with the wider market, with the Dow (-0.9%) down on weaker than expected consumer sentiment and news JP Morgan reported increased losses in its banking unit. The AMEX Airline Index consequently slid 2.8%. The slide came despite the fifth consecutive decline in oil prices (-1.8%), to USD78.00 per barrel.

US carriers expected to make gains this week from improved 4Q2009

US airline stocks may gain this week on improved 4Q2009 results, with carriers expected to report narrowed losses due to reduced capacity. Barclays Capital stated during trading on Friday that it is impressed with current US carrier revenue trends. However, analysts added rising fuel prices may offset some of the gains.

American Airlines (-2.4%) will be the first airline to report 4Q209 results on Wednesday (20-Jan-2010). According to Reuters, analysts expect the carrier to report a loss of USD1.19 per share.

LAN (-0.9%) is expected to lag again on Monday (18-Jan-2010), following the Presidential election of shareholder, Sebastian Pinera on 17-Jan-2010. Mr Pinera vowed to sell his 26% stake in the carrier, worth approximately USD1.5 billion, by Mar-2010 if he was elected. Major shareholder, the Cueto family, may purchase some of Mr Pinera’s stake in the carrier. Chile’s Ipsa index (-0.7%) ended trading on Friday down.

Republic Airways (-5.8%) made the biggest fall on Friday, following news the day prior that it plans to relocate all executive staff to its Indianapolis base as it consolidates with Frontier Airlines and Midwest Airlines. Approximately 3,000 staff, mostly cabin crew and reservation staff, will remain in Denver, Frontier’s old base, while approximately 1,500 staff will remain in Milwaukee, Midwest’s old base. 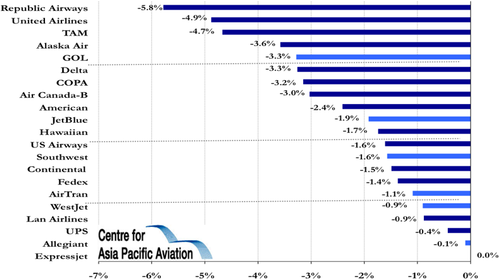