North and South American carriers stocks slumped on Thursday (28-Jan-2010), amid a number of 4Q2009 and FY2009 results. Stocks also moved with the wider market, with the Dow (-1.1%) ending trading down, following poor outlooks from Motorola and Qualcomm, weakening optimism in the US technology sector.

US Airways Chairman & CEO, Doug Parker, was upbeat, stating the results "reflect the extremely difficult environment the industry experienced in 2009. Given that environment, we are particularly pleased with the significant improvement in financial performance versus 2008. The actions we have put in place to address the challenges of the past two years - capacity cuts, a la carte revenues, cost control and a commitment to efficient operating reliability - are working. We enter 2010 with encouraging momentum and well positioned to take advantage of the improving economic environment”.

Investors are increasingly concerned about rising cost profiles across the sector and the outlook for revenues in 2010. 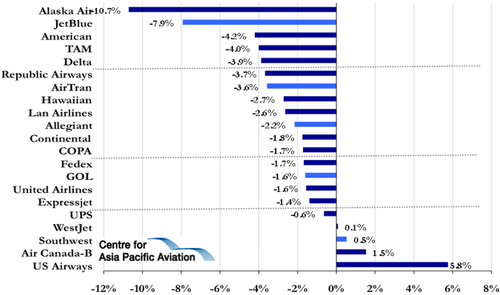