US Airways has embarked on the last phase of a strategy to ensure the majority of its flights are operated in profitable markets and 99% of flights touch the carrier’s hubs or its eastern shuttle routes. The first roll-out of service to 22 new markets from Washington National Airport culminates a two-year effort by Delta Air Lines and US Airways to engineer a slot swap that resulted in US Airways gaining 42 slot pairs at National and Delta gaining 132 pairs at New York LaGuardia from US Airways. Once all the phases of new flights from National are complete, US Airways is banking on an annual USD75 million contribution to its revenue as it further cements its position as the leading carrier at the airport closest to the US capital.

US Airways is also transitioning weekend service to Bangor, Maine and Savannah, Georgia to daily, and is adding a daily non-stop frequency to Hartford, Connecticut.

Unlike Delta at LaGuardia which is largely backfilling flights US Airways offered at the airport, US Airways at National appears to be introducing flights operated with regional jets into new markets where virtually no competition exists.

There is currently no service from Washington National to Birmingham, Jacksonville, Pensacola, Tallahassee, Fort Walton Beach and Islip. But US Airways already has established a presence in all of those markets largely through service offered from its Charlotte hub. For the week of 26-Mar-2012, Charlotte is the second largest market in terms of seat share from Birmingham, Pensacola, Tallahassee and Fort Walton Beach. It is the top destination from Jacksonville, where US Airways is the dominant carrier in the market.

It will be interesting to see if the direct flights to Washington National from those markets dilute connecting traffic from US Airways’ Charlotte hub, which is the carrier’s largest by number of departures. The airline’s management team has obviously concluded enough demand exists to offer direct flights from National without compromising the performance of its Charlotte hub. 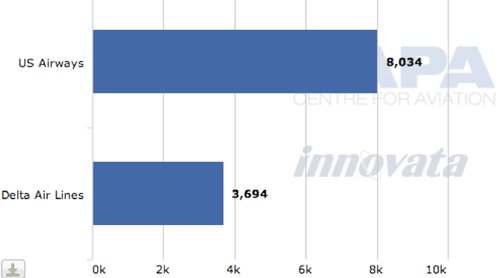 Service from National to Jacksonville, Pensacola and Fort Walton seems logical given the large presence of military bases in those markets. Jacksonville is home to a large Marine base Camp Lejune while a large naval air station is prominent in Pensacola. There are two major air force bases located in Fort Walton Beach.

Local, state and federal governments have been a major employer in Little Rock for a number of years, according to City-Data, which could produce ample traffic to Washington National. Biotechnology is also an emerging industry in the market, and agriculture has always dominated the city’s economy.

Birmingham’s economy relies strongly on the medical industry, City-Data concludes. But a number of power and energy companies have engineering and technical services headquarters in the city including the Alabama Power Company, Energen and Sonat.

Omaha is home to William Buffet’s Berkshire Hathaway corporation and four other Fortune 500 companies: ConAgra, Peter Kiewit Sons, Union Pacific and Mutual of Omaha, according to City-Data. US Airways sees a strong base of corporate travellers from Omaha to the US capital, and currently serves the city from its Phoenix and Charlotte hubs. US Airways is competing with Frontier Airlines in the National-Omaha market. Frontier operates six weekly flights with its 100-seat Embraer E190s while US Airways is operating smaller 70-seat Embraer E170s. 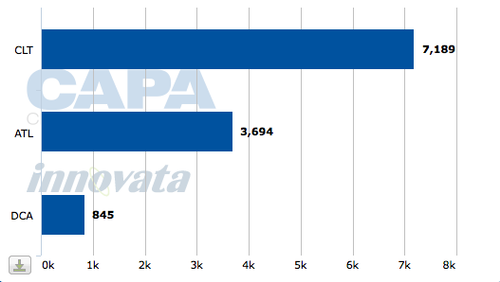 Southwest has long been the dominant player at Long Island’s Islip Airport, and it was the only New York area airport the carrier served until it began service from LaGuardia and Newark during the last three years. Southwest and US Airways are the only carriers serving the airport, and prior to adding National US Airways’ only operated out of Islip to Philadelphia. It is likely US Airways sees potential in capturing passengers who prefer not to travel the 72km from Islip to LaGuardia and the 60km from Islip to New York JFK.

Delta is retaining its flights from Washington National to all its major domestic hubs: Atlanta, Cincinnati, Memphis, Minneapolis, Salt Lake City (being introduced in Jun-2012), and Detroit, which means that US Airways will compete directly against its slot swap partner in the market from National to Memphis. But Delta will still dominate the pairing in terms of seats offered. Between Mar-2012 and Sep-2012, it will offer nearly 3000 weekly seats from the airport, with the exception for the beginning of Jul-2012 when seat counts dip to 2232, compared with US Airways’ planned capacity of roughly 1110 to 1365 seats in the Washington National-Memphis market. 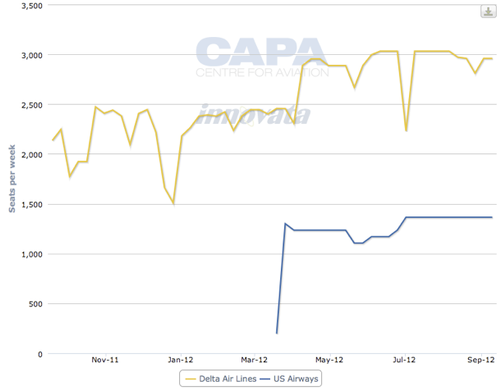 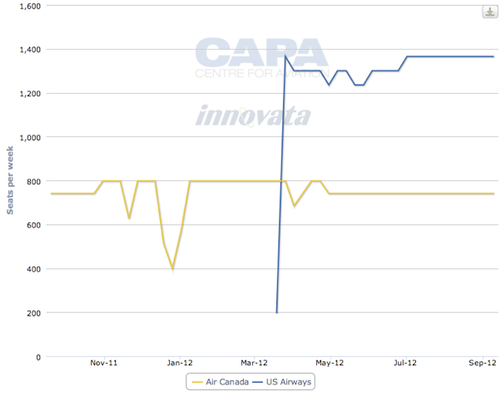 US Airways is also entering two of Air Canada’s markets from National during the second phase of its roll-out from the airport in Jul-2012 when it introduces new service to Montreal and Toronto. So far there does not appear to be fare wars ensuing between the two Star Alliance carriers. The lowest available fare on both carriers for a roundtrip flight from National to Montreal for travel from 16-18 July is USD783. A roundtrip ticket on US Airways for travel during the same time to Toronto is USD464 compared with USD420 for Air Canada.

Other markets US Airways is debuting from National in July are Fayetteville, Arkansas; Augusta, Georgia; Minneapolis, Minnesota and San Diego, California.

US Airways highlights that low-cost retail giant Walmart is headquartered in Fayetteville, which does not have direct flights from Washington National. American, Delta, United, Allegiant and US Airways are the carriers with the largest presence at the airport in terms of seats offered, and Dallas, Orlando, Atlanta and Charlotte are the markets with the largest seating capacity from the city.

Augusta is currently only served by Delta and US Airways with flights to their Atlanta and Charlotte hubs. The city houses the US Army’s Fort Gordon base, and also has strong ties to medical and biotechnology industries.

New flights from National to San Diego offered by US Airways are the result of the loosening of the perimeter rule that has limited operations beyond 2011km. A provision in the recently passed FAA Reauthorisation bill allowed US Airways and other incumbents, American, Delta and United, that offer limited long-haul flights from National to trade service within the perimeter for a new long-haul flight from the airport. Slots were also granted for new entrants to introduce new flights from the airport, and the US Department of Transportation (DoT) is evaluating proposals from various carriers.

US Airways was the last of the major carriers to reveal its long-haul destination from Washington National. United is introducing flights from National to San Francisco in May-2012, followed by new flights from American to Los Angeles and Delta to Salt Lake City in June-2012.

San Diego has one of the largest naval fleets in the world, and US Airways cited the strong military presence in the city when it announced the new market. Southwest, United and Delta offer the largest number of seats from San Diego, and Phoenix is the top destination in terms of seats offered from the airport. US Airways currently serves San Diego from both its Phoenix and Charlotte hubs. Phoenix is also Southwest’s third largest airport based on daily departures, and the carrier offers multiple daily flights between San Diego and Phoenix.

Ahead of its second big roll-out from National in Jul-2012, US Airways is introducing flights from the airport to Cincinnati, Ohio and Des Moines, Iowa. Des Moines is a market being abandoned by Delta as it focuses its service from National to its hubs. The largest carriers at Des Moines are Delta, United and American, and the markets with the most capacity are those carriers’ hub cities of Chicago, Denver, Dallas and Minneapolis. Washington National is not the top 10 cities, but US Airways does offer flights from Des Moines to its Charlotte and Phoenix hubs. 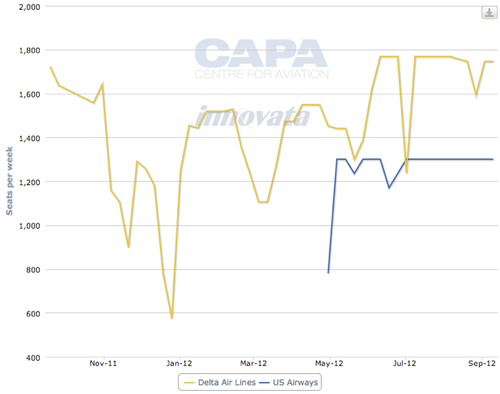 US Airways and Delta waited the better part of two years to get approval from US regulatory authorities for the slot swap deal at National and LaGuardia airports. But for US Airways management, both the persistence and the patience were worth the wait.

Once all the new flights from National are introduced, 99% of US Airways’ flights will touch its hubs of Charlotte, Phoenix, Philadelphia and Washington National as well as its shuttle flights in the US Northeast. That compares with 83% in 2006, and since that time the carrier has retooled its network by significantly shrinking its presence in markets where it was underperforming: Boston, LaGuardia, Pittsburgh and Las Vegas. Its flights to LaGuardia, which it admits were largely unprofitable, are falling by 68%. 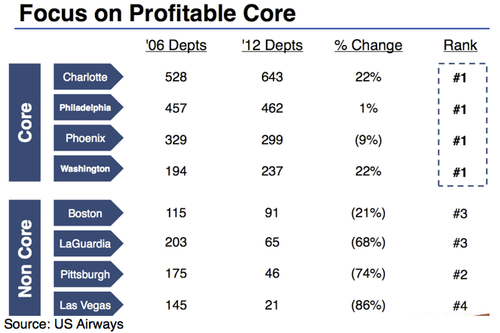 The carrier believes the number one position it will achieve in its core markets positions it well for international growth, but it is not clear where the carrier will expand internationally in the long term. Carrier management states the eight A330-300 aircraft arriving in 2013 and 2014 are replacement aircraft for older widebodies. US Airways has a smaller international network footprint than its legacy rivals American, Delta and United. Notably US Airways lacks service to Asia. US Airways has determined that joining the trans-Atlantic joint venture among its Star Alliance partners Air Canada, United and Lufthansa is not a high priority, says US Airways president Scott Kirby. He cites favourable performance by US Airways in its trans-Atlantic markets after the carrier made a push to bolster its corporate sales in Europe. The airline’s unit revenues in its trans-Aatlantic markets increased 12% year-over-year during the fourth quarter.

In the short term, the priority for US Airways is to launch flights from its Charlotte hub to Sao Paulo, Brazil. It received permanent authority to serve the city through the slot swap with Delta, and Mr Kirby says US Airways continues to work with Brazilian authorities to finalise the launch. The airline has been serving Rio de Janeiro since 2009, but has long coveted flights to Brazil’s largest financial centre from Charlotte, where banking is a major economic driver. 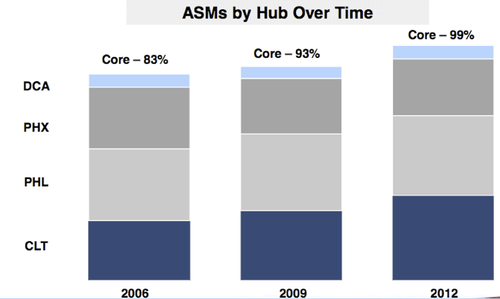 US Airways ability to finally solidify its position at Washington National gives the carrier a leading presence on the US east coast, a region that comprises some of the most busiest air routes in the nation. The airline believes it will serve more east coast destinations than its rivals, and becomes the second largest carrier in terms of frequency levels behind Delta. As the final piece of its network revamp comes together, US Airways is adopting a simple strategy of focusing its assets where it believes it can maximise profitability.

This is the second in a two-part series examining the strategy of US Airways. Part one, US Airways holds firm to its viability as a stand alone carrier, appeared last week.

US Airways spoke cities served from its east coast hubs 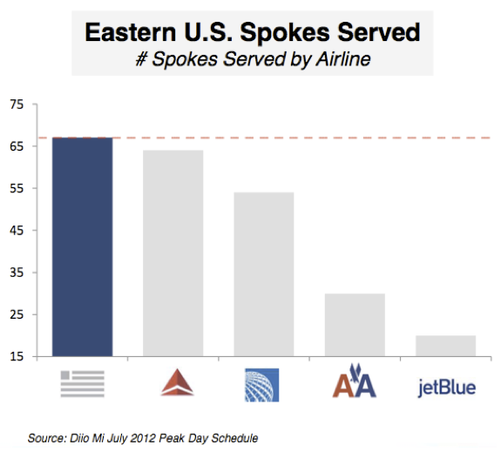 US Airways east coast departures as of July 2012 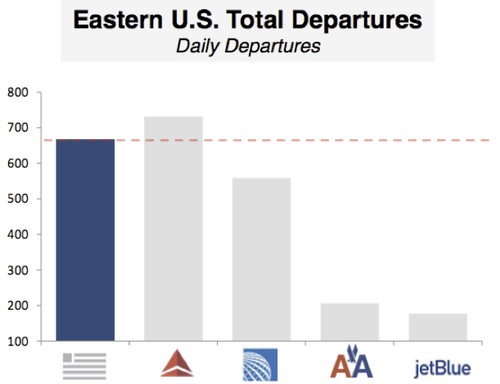