Despite hiring advisors to explore a potential merger with bankrupt American Airlines, executives at US Airways believe they have built a carrier to return consistent profits on a stand-alone basis, and remain steadfast in their belief that consolidation in the US airline industry is no longer imperative for the business to generate regular returns, even with fuel prices steadily climbing.

Flying solo out of the downturn

After the official close of the US Airways-America West merger in 2005, the new US Airways enjoyed two years of profitability before bleeding more than USD800 million during the fuel price crisis of 2008. The global recession that ensued the following year triggered the worst downturn in the history of the aviation business, forcing US Airways and the industry at large to make structural changes to avoid a total collapse.

For US Airways that meant joining the industry in new-found capacity discipline, creating new sources of revenue through ancillary products and an unflinching focus on cost containment and reduction. Specifically US Airways instituted a USD70 million cost cutting scheme and tapped the capital markets for USD1.2 billion in 2008 and an additional USD536 million in 2009 to stay afloat. Roughly USD800 million of that debt has to be repaid. US Airways president Scott Kirby concludes the “Great Recession” cost the carrier USD1.7 billion in total revenue.

While Mr Kirby notes some pundits believed US Airways would be forced into bankruptcy or liquidation, he does acknowledge the carrier had to “borrow a lot and scrimp and scramble to survive”.

But US Airways rebounded in 2010, posting a USD447 million profit as the effects of what company management believes are permanent structural changes in the airline business – capacity discipline, strict cost control and an expansion of ancillary revenues -- began to take effect.

Profits at US Airways in 2011 plummeted 75% year-over-year to USD111 million. But the airline relishes the results as its fuel expense in 2011 increased USD1.3 billion versus the year prior. 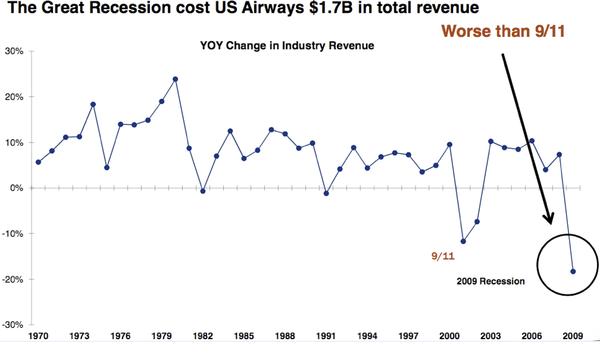 The difference between 2008 and 2011, according to Mr Kirby, was in 2011 85% of the USD1.3 billion fuel cost price increase was passed onto the passenger in the form of higher fares.

At the same time US Airways and the industry recovered the expense of staggering fuel price increases in 2011, the carrier continued its mission to keep what it deems as a distinct cost advantage relative to its legacy peers. From 2007 to 2011 for a stage-length adjusted for 981 miles, US Airways estimates its cost grew 6.6% compared with an 18% hike at low-cost legend Southwest Airlines.

Carrier executives realise US Airways cannot let the cost gap it has with other carriers shrink in light of the airline’s major hubs of Phoenix, Charlotte and Philadelphia producing lower revenues than the hubs of its major network peers. Mr Parker cautions US Airways needs to maintain the cost advantage to avoid the position the “old US Airways” found itself in prior to merging with America West and facing liquidation – no revenue advantage and a cost disadvantage. 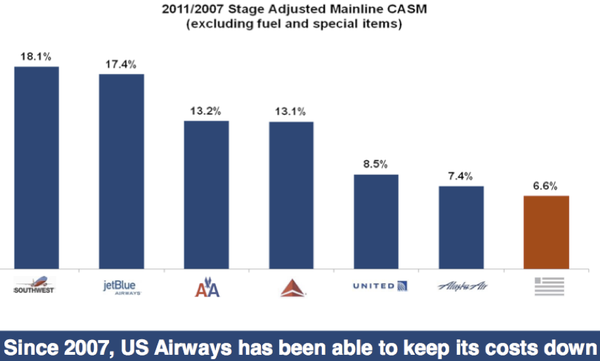 US Airways estimates its unit costs excluding fuel will increase roughly 1% in 2012 compared with other carriers offering guidance of a 3%-4% increase, says carrier CFO Derek Kerr. The airline’s mainline unit costs excluding fuel and special items for 2011 was USD 8.37 cents, USD 9.39 cents for the combined mainline and US Airways Express operation. 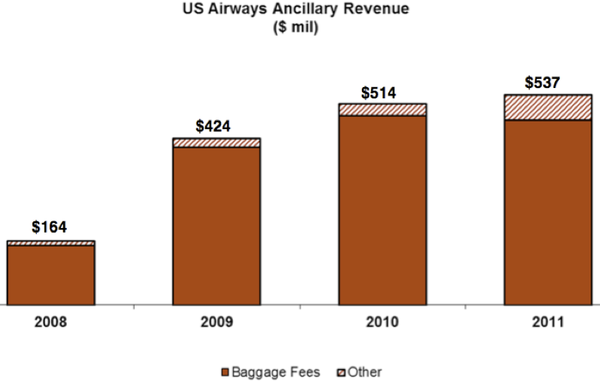 Another element contributing to US Airways’ profit rebound is ancillary revenues, whose introduction is a “permanent and systemic change to the industry”, says Mr Kirby.

The growth in ancillary revenues, largely stemming from baggage fees, helped US Airways grow its total unit revenues from USD 13.60 cents in 2008 to USD 15.06 cents in 2011. It believes the largest revenue generating potential lies in its “Choice Seats” offering, which allows passengers to select their preferred seating choice for a fee. Revenues from its Choice Seating option, which is allocated to roughly 7%-8% of its seats, should reach roughly USD100 million this year. US Airways is also introducing a preferred access offering through its website in April giving customers the option to pay extra for earlier boarding and expedited security.

While US Airways’ merchandising efforts are not as aggressive as some of its legacy peers – Delta Air Lines aims for USD1 billion in merchandising revenue in 2013 – it recorded USD537 million in ancillary revenue during 2011. Mr Kirby believes if US Airways could increase annual revenue from the Choice Seats products to USD300 million to USD400 million per year once the product is available through third-party distributors including traditional and online travel agents. The carrier is working with global distribution system firm Sabre to offer its pay-for-a-preferable seat product and hopes to have one large online travel agency distributing the product for sale. Currently it is available through the US Airways website, kiosks and phone reservations system.

All airlines are facing high levels of uncertainty in their modelling for 2012 due the precipitous rise in oil prices, and US Airways is no different. The carrier has not had any fuel hedging in place since 2008, ultimately determining locking in a set price was cost prohibitive.

The strategy helped the carrier achieve record profits in 2010, but fuel costs crimped US Airways’ profits last year. At the moment US Airways is cautiously optimistic about demand patterns despite the run-up in fuel prices. Mr Kirby says both leisure and corporate demand has remained strong. He does acknowledge the carrier saw some weakness in February and the 7% year-over-year rise in unit revenue for the month was below 10% forecast in January. But he says as the carrier goes through March the month looks much like January when US Airways’ unit revenues grew 10% year-over-year. Mr Kirby comments that it is “remarkable to talk about 7% RASM [revenue per available seat mile] as a disappointment”.

But Southwest Airlines has already warned of a first quarter loss almost solely driven by higher fuel prices, and has said fare increases seemed to less effective. Mr Kirby admits the year-over-year unit revenue comparisons become tougher going forward after there was essentially a fare hike every week during the first three months of 2011.

In the worst case scenario, if fuel continues its rise, US Airways management believes carriers will cut capacity if the higher fuel prices depress demand. They believe the industry has shown it will decrease supply accordingly in the past when oil prices have risen to record levels.

As for US Airways going forward, Mr Parker makes no apologies that its goals for 2012 are identical for 2011, and serve as the basis for the carrier’s long-term strategy going forward – reliable operations, maintain its cost advantage, maximise revenue and engage employees.

Yet the consolidation pioneer does not rule out US Airways playing a role in future mergers. Mr Parker says it makes sense for the carrier to examine opportunities as they arise, and US Airways continues to investigate a tie-up with American. “I suspect that’s where we’ll be for quite some time as the bankruptcy unfolds,” he says.

This is the first in a two-part series examining the strategy of US Airways. Part two will run next week.