US Airways expects a rebound after government shutdown. Plans must go ahead independent of American

US Airways believes it can recoup lost revenue triggered by a 16 day US Government shut-down after recording reasonably solid 3Q2013 results, including higher than expected unit revenues for the three months ending 30-Sept-2013.

As the outcome of the US Department of Justice (DoJ) challenge to block the merger of American Airlines and US Airways is tough to predict, both carriers are moving forward in network expansion on a stand-alone basis. For US Airways it means international expansion from its Charlotte hub as a means to close the gap in a variable financial performance from 2Q to 3Q, while American appears to be crafting a Pacific strategy that entails a build-up in Dallas/Fort Worth to strengthen its position in the trans-Pacific against United and Delta.

US Airways’ net 3Q2013 profit actually declined year-on-year by USD29 million to USD216 million as a result of income tax payments. On a pre-tax basis its profits increased by USD90 million to USD336 million driven by top-line revenue growth of 9% to USD3.9 billion. Consolidated passenger unit revenue growth of 5% beat previous guidance of an increase of 3.3% as the carrier recorded strength across all its geographies, said carrier president Scott Kirby in an earnings discussion. 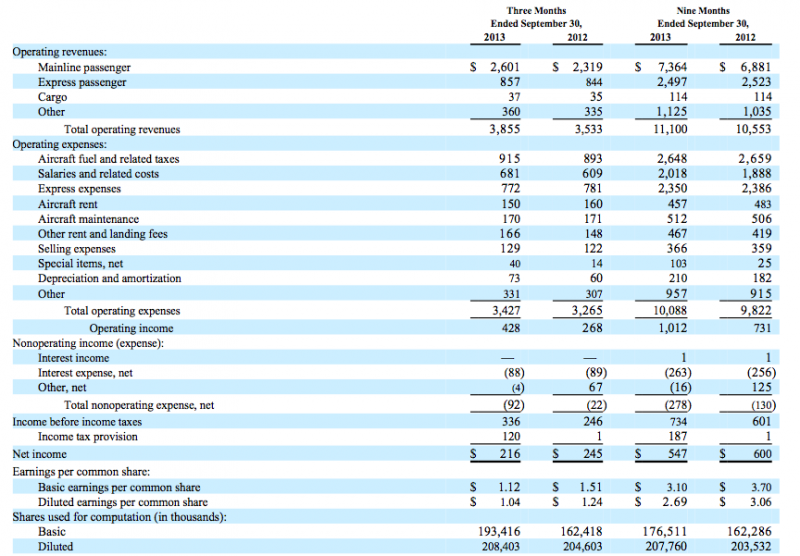 Adding some colour to the carrier’s performance by region Mr Kirby stated that domestic unit revenues grew 5% while US Airways’ trans-Atlantic revenues increased 8% year-on-year. The carrier has been pursuing point-of-sale corporate contracts in Europe, and unit revenues from those accounts grew 22% year-on-year during 3Q2013.

In responding to a query about previous comments made by US Airways regarding a certain inability to attract a higher level of corporate customers on a stand-alone basis, Mr Kirby remarked that larger carriers have whole sets of products available to corporate travellers that US Airways cannot offer – largely a ubiquitous network. But he stated the carrier instead is focussing on certain corporate travel niches, offering US Airways’ pursuit of Europe-based corporate contracts as an example.

US Airways capacity to Latin America grew by roughly 99% as the carrier launched service from Charlotte hub to Sao Paulo in Jun-2013. Its yields in that region were roughly flat year-on-year. Presently, US Airways has undesirable slot times in Sao Paulo, explained Mr Kirby. But he expects the carrier will gradually work to attain more slots with more favourable times, and estimated the process would take about 18 months.

US Airways’ positioning as the largest carrier at Washington National Airport in terms of seats on offer – roughly 46% for the week of 21-Oct-2013 to 27-Oct-2013 – has resulted in some short-term revenue pressure triggered by the US Government shutdown. The carrier now believes Oct-2013 passenger unit revenues will grow just 1% compared with previous estimates of 4% to 5%. 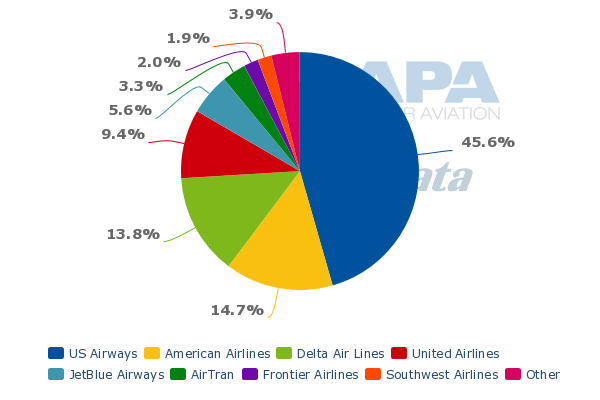 Delving specifically into US Government-booked revenue, which represented approximately 3% of US Airways’ total revenue in 2012, Mr Kirby remarked those bookings plummeted 57% during the first two weeks of Oct-2013. Close in government bookings to the three airports US Airways serves in Washington, DC metropolitan area – Baltimore, Washington Dulles and Washington National – fell 54% during that same time.

Mr Kirby concluded that while even leisure bookings declined during the shutdown, the booking strength the carrier has recorded since the government has resumed business “leads us to think that we will recover all of the lost bookings for November and December, and therefore, we don’t expect any impact on those two months”.

Making remarks similar to sentiments expressed by Delta, Mr Kirby did conclude the shift of the busy days after the US Thanksgiving holiday from Nov-2013 to Dec-2013 would result in flat unit revenue growth to an increase of 2% for Nov-2013 and a rise of 4% to 6% in Dec-2013.

US Airways is sticking to previous guidance of consolidated capacity growth of 3.5% for FY2013. Seat miles in each entity – domestic and international – are expected to rise 3.5%, again driven by larger-gauge new aircraft replacing older narrowbodies with smaller seat densities and more international operations. 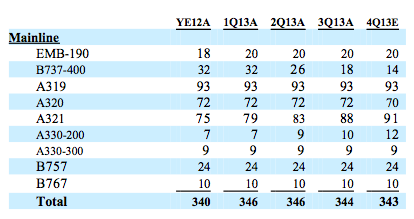 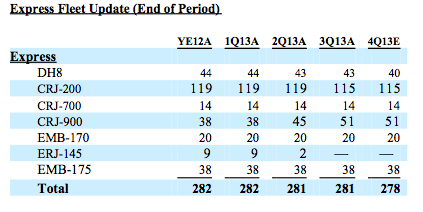 The carrier has not split out its currently projected 3% to 4% capacity growth for 2014 by domestic and international, but Charlotte’s stance as an international hub continues to be elevated as seasonal service to Barcelona, Brussels and Lisbon is introduced in 2014 for the US summer high season.

Adding some perspective to an observation that US Airways performed better in 2Q2013 (its net profit was USD287 million) than 3Q2013, Mr Kirby remarked that the second quarter is usually stronger on a US domestic basis while other carriers such as Delta with a larger portion of international operations tend to post better results than US Airways in the third quarter.

As US Airways grows more internationally, Mr Kirby believes that gap should narrow. While US Airways executives attempted to steer clear of any discussion regarding the proposed merger with American, a combination of the two networks would raise the level of network ubiquity Mr Kirby referenced in attracting corporate clients. With the original merger close date of Jul-2013 now in the rear-view mirror, Delta and United (if it can succeed in winning back customer confidence) have more time to tout their network connectivity to corporate customers.

US Airways and American have no choice but to develop separate networks, for now

That presumed extension of the competitive gap is based on the two carriers successfully beating the DoJ’s challenge to their merger, the odds of which are anyone’s guess. In the meantime each carrier seems to be moving forward with their respective network strategies as American plans key new service from Dallas/Fort Worth to Hong Kong and Shanghai to bolster its position in the dynamic US-Asia market (where US Airways will be absent as a stand-alone entity).

Adding some reality to US Airways’ favourable 3Q2013 results, company CEO Doug Parker noted that the airline’s credit rating recently notched up to a B, which is five upgrades shy of investment grade. “We know the merger is good for competition. But also, I want to make sure everybody understands what we’re really talking about here is merging a single B credit with a bankrupt credit,” Mr Parker concluded.

His point is no doubt valid. But unfortunately, the DoJ is not likely to factor in credit ratings and how the merger could improve the credit standing of a combined company as it presents its reasoning for concluding the tie-up is uncompetitive.

It is now up to a judge to weigh American and US Airways’ arguments that the merger will solidify a healthy airline industry against the DoJ’s assertion that the outcome will be anti-competitive. And the outcome still remains anyone’s guess.