US airline stocks were down quite heavily on Friday, as the wider market fell in response to news of a civil lawsuit against Goldman Sachs. Airline stocks were also hit by the Icelandic volcanic eruption, which is playing havoc with trans-Atlantic scheduling.

The first four days of the eruption, the worst aviation disruption for US carriers since 9/11, has cost the US airline industry USD80 million in lost revenue, according to Boyd Group International. The analysis was based on known and expected cancellations to Sunday, 18-Apr-2010 and does not represent ancillary losses due to aircraft and crews out of rotation, and passenger re-routing expense. It does, however, include measurable losses in secondary domestic passenger traffic that is generated directly by international service.

“Passengers to and from abroad don’t all live and work at US international gateway cities. That passenger flying from Munich to Atlanta also makes domestic trips within the US, immediately or even days after he enters the US. With these volcano-related international cancellations, our data indicate a loss of more than 90,000 enplanements at airports across America in just the first four days subsequent to start of the Iceland eruptions." At current connection-to-passenger ratios, these enplanements represent approximately 73,000 actual domestic one-way passenger trips.

In terms of actual passengers, US carriers saw a loss of well over 200,000 passengers during the first four days of the event alone. This is a very small percentage of the over 540 million passenger trips carried by US carriers annually. "But it still represents a loss of revenue of nearly USD80 million over a short  period - and it's due to an event thousands of miles away in the North Atlantic," Sieber added.

These data again underscore that no communities are immune from events in the global economy. According to Boyd Group International's Airports USA enplanement forecasts, over 27% of all US passenger enplanements will be directly or indirectly the result of international passenger demand by 2014.

Delta, US Air, American, Continental and United (all with significant trans-Atlantic operations) fell between 3-4% on Friday. Reductions for Southwest and the other largely domestic focused LCCs were more muted, though AirTran fell 4.2%.

Canada's Porter Airlines filed its preliminary prospectus in preparation for an initial public offering, but said no existing Porter shareholder was planning to sell shares during the IPO process. Porter intends to use the net proceeds of the proposed offering for working capital and other general corporate purposes, including potential acquisition of aircraft beyond its current 18-aircraft Bombardier Q400 fleet. It is expected two more aircraft this month. 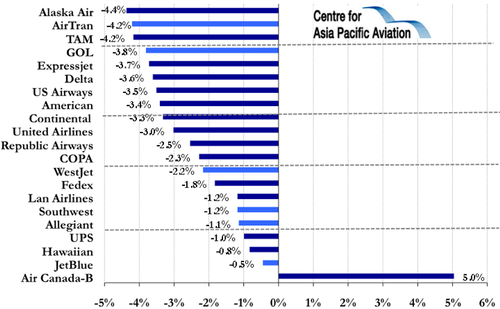