United/Continental merger may be completed this week; Pressure on American Airlines

North and South American airline stocks were mixed on Wednesday (29-Sep-2010) as wider markets ended the day slightly lower. The Dow (-0.2%) slipped in late trading on continued concerns over debt issues in Europe.

United/Continental merger may be completed this week

United Airlines (+1.7%) and Continental Airlines (+1.6%) gained after Moody's Investors Service raised its debt ratings for United Airlines. Moody's raised UAL's corporate family and probability of default from B3 to B2. The analysts stated they upgraded the carrier in response to expectations of better debt measures and cash in future quarters.

The company also affirmed its rating of Continental Airlines Inc at B2, but lowered ratings on some of the carrier’s aircraft due to weak values for regional aircraft. The ratings outlook for both carriers is "stable".

The carriers’ merger could be finalised as early as this week, with plans to integrate the airlines 87,000 employees into one workforce progressing. The airlines are targeting 01-Oct-2010 to close United's USD3.17 billion all-stock purchase of Continental after shareholders at both airlines approved the agreement on 17-Sep-2010. The merger will form the world's largest carrier.

FedEx 'back on track' to reach long-term goals

FedEx Corp (+2.0%) also rose after CEO, Fred Smith, stated China, India and Brazil are leading a recovery in the express-shipping industry, adding that it would rather invest in B777Fs for Asia, India, Brazil and Mexico because the returns there will be “much higher” than in Europe. Mr Smith added that he is optimistic about the company’s prospects in 2011 and that the company is “back on track” to reach its long-term goals of earnings-per-share growth of 10-15% and operating profit margins of 10% of more. However, Mr Smith added that the company's freight unit  “continues to face a tough market” with excess capacity reducing yields.

American Airlines slipped (-0.5%), after RW Mann & Co consultant, Robert Mann, told Reuters the carrier is now “facing the market from the bottom of the top three as opposed to from the top of the top three”, following news of Continental/United and Southwest/AirTran merger deals. He added American can no longer claim that it has a more extensive route network than its competitors, as the newly merged companies will have combined networks. However, AMR Vice President of Corporate Development, Beverly Goulet, denied Mr Mann’s claims that business travellers pick those airlines with the largest networks, stating the key is to operate to the right cities. However, she added that the carrier does believe consolidation is good for what is a “fragmented” industry and it is exploring all its options.

During trading, British Airways and Iberia announced they have now formally signed an agreement to start a trans-Atlantic joint business, which is worth a combined USD7 billion in annual revenues. The revenue share agreement allows the three airlines to cooperate commercially on flights between the US, Switzerland and Norway and the US, Mexico and Canada. 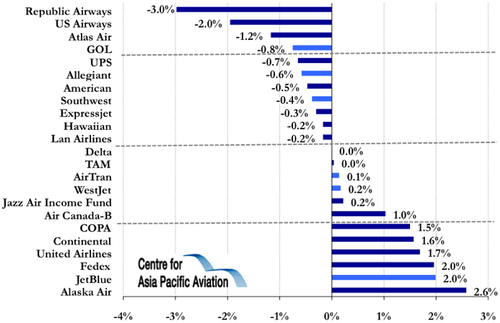