North and South American carriers’ stock surged on Wednesday (02-Jun-2010) on improved traffic results from Continental Airlines (+12.6%) the day before and a boost in the wider market.

JP Morgan analyst, Jamie Baker, told Reuters Continental’s traffic report is expected to “kick off a multi-week, across-the-board strengthening of consensus, the magnitude of which is unlikely to go ignored by equities, in our view”.

The AMEX Airline Index (+6.0%) was boosted as a result. The Dow (+2.3%) ended the session higher on gains in the energy sector and news pending home sales in the US were higher than expected in Apr-2010.

United Airlines (+12.6%) made the biggest gain of the day, after Merrill Lynch reinstated coverage of the carrier during trading with a "buy" rating. The company stated there is good momentum at the carrier, whether or not it merges with Continental Airlines, as a “rising business mix, better reliability and redeployment of aircraft” is increasing its RASM and margins. Merrill Lynch expects the carrier to generate approximately USD1.5 billion p/a of free cash flow over the next few years.

The carrier hit a new 52-week high of USD49.48 during trading as a result. 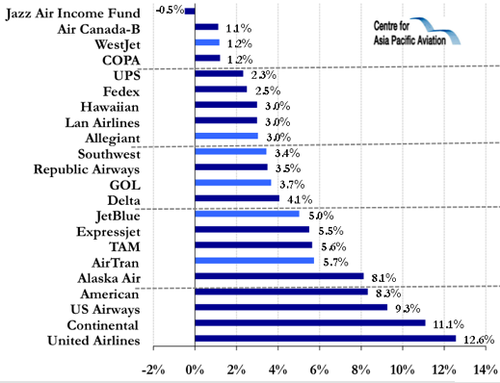