United Chair and CEO Glenn Tilton pointed out that the operating profit was the first 1Q operating profit in a decade, a feature especially significant since the quarter is traditionally its weakest period. He fairly crowed that United ended the quarter with the best net margin (-2.2%) of the five network carriers, while its 11-point unit revenue growth bested the industry. The net margin represented a 13-point improvement year on year. The company posted a 9.2 point improvement in operating margin to 1.6% and an 11.4 point improvement in adjusted operating margin to 1.4%. 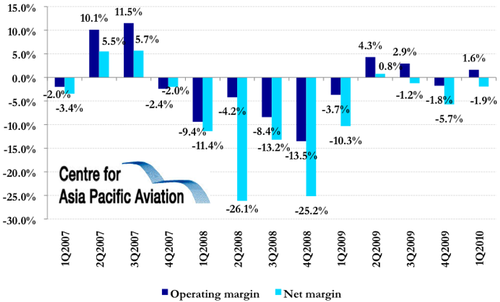 “This did not simply happen,” he told analysts during the call yesterday. “[Our work is] generating returns, enabling us to leverage the improving demand environment and produce results in sharp contrast with our peers. These results are evident in Asia where our unit revenue was up 30 points compared to the largest carrier which reported essentially flat results for the Pacific.”

Mr Tilton also said the carrier’s PRASM growth was up 19% to 11.73 cents calling it industry leading at some 11 points ahead of its peers. It was also up 6% year on two. He said that the company is not adjusting year-end guidance. In April, the company had USD4.5 billion of unrestricted cash, about 27% of trailing 12-month revenues. He called its liquidity position among the best for network carriers and reported limited fixed obligations. 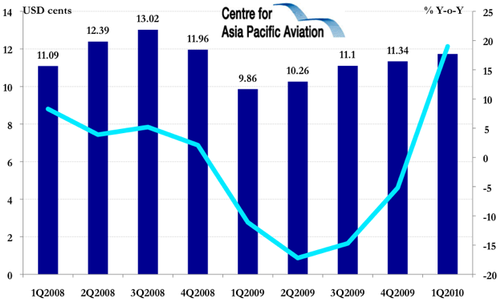 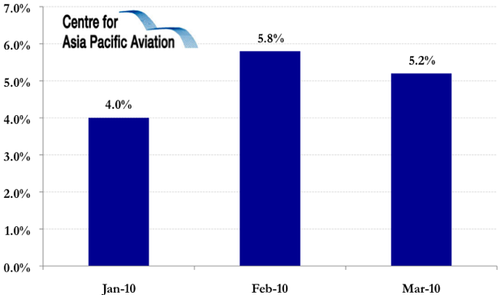 He tossed off inquiries about mergers by saying: “In the last several weeks much has been written about consolidation. At this time we are thoughtfully considering our options in that regard. Our position advocating consolidation as one of the transformational changes necessary to move our industry into a position of sustained profitability is well known. We will not comment further unless and until we have something to announce.” And no matter how analysts crafted their questions, the company would not budge.

However, reports circulated in the Chicago Tribune during the day that the current negotiations with Continental could end in a deal by week’s end although Monday the New York Times reported the talks were stalled on price. “A source close to the talks told the Tribune that the carriers remain on track to wrap up a deal during the next few days and that price is the only major issue yet to be resolved.” The Continental brand would vanish with so many other venerable airline names.

The price issue made Stefel Nicolaus Hunter Keay’s question interesting as he tried to get Mr Tilton to discuss what Keay said was a stock price that was woefully undervalued. He wanted to know whether the company could justify selling at that price. But no dice, the United CEO wasn’t talking.

However, in response to JP Morgan’s Jamie Baker asking Mr Tilton to describe the key criteria for closing a merger, he noted that mergers not only come with synergies but dis-synergies. “The stars have to be aligned across the full spectrum for any two companies to consider going down this road,” he said, adding that in that respect airlines are no different than any other industry. “But the unique considerations airline managements have to consider are the solutions created by the value of any particular deal. Net of synergy, net of complexity, net of dis-synergy, net of breakage.”

Responding to an earlier suggestion from US Airways Chair Doug Parker there is more to be realized from that airline’s participation in the Star Alliance, Tilton noted there was more value to be extracted from every single alliance situation in which United is now involved. “These are relatively immature constructs across the Atlantic and Pacific,” he said. “There is more work to be done to come together in ways no one previously imagined.”

When asked if the company is worried US Airways, the merger negotiations with which were dropped, would leave Star, Tilton quoted Parker has saying what is good for Star is good for US Airways. Indeed, Parker indicated he considered Star still the best alliance during his conference call yesterday.

CFO Kathryn Mickells reported that ancillary revenues per passenger rose 4.5% year on year, to USD14, which offset a reduction in third-party maintenance work. United records much of its ancillary revenue for seat upsells, first and second bag fees and ticketing and change fees under passenger revenue. Increases in these fees, it said, resulted in a 0.8 point improvement in consolidated PRASM year on year and a 2.8 point improvement compared to 1Q-2008.

Mr Tague broke out the Japan statistics, saying United’s competitor networks were more concentrated in Japan. Unit revenue growth in that market grew by 20% for United with a like increase in the Australian market. The Atlantic unit revenue was up just over 25% on a 6% increase in load factor and a 17% increase in yield. He also reported that down gauging at Heathrow led to a 40% unit revenue increase year over year in that market.

April domestic passenger unit revenue expected up between 23% and 25%

Domestically, consolidated unit revenue jumped 14% on a two-point increase in load factor and an 11% increase in yield as capacity fell 1%. Mr Tague reported that April passenger unit revenue is expected to jump between 23% and 25% year on year, despite the impact of the Iceland volcano which forced the cancellation of 325 flights to Europe. This resulted in a 2.6-point drop in anticipated capacity and a revenue impact of between USD30 to USD35 million, already included in the April outlook.

“This management believes there is much more work to do and much more potential to be realized,” he said. “The company that does the best work wins. More and more we are that company and more and more we realize just how much left to be done. Our relentless pursuit of United’s full potential is not just borne of necessity but rather of the opportunities available to us.”

The company also reported a 19% year-over-year increase in consolidated passenger revenue per available seat mile (PRASM) to 11.73 cents for the first quarter, while keeping consolidated CASM increases to only 8.6% to 12.66 cents on a 3.3% capacity reduction to 32.9 billion. Consolidated yield improved 12.2% to 14.56 cents and consolidated load factor increased 4.7 percentage points year-over-year to 80.4%.

The severe winter storms in February reduced revenue for the quarter by approximately USD40 million. The reduction in capacity increased consolidated CASM excluding fuel by about a percentage point.

"We are pleased to report an operating profit in what is traditionally a weak quarter for United compared to our peers, clearly reflective of our efforts to drive systemic improvements that are delivering results across the company," said Mr Tilton. "We are committed to margin leadership, having produced the best net margin of the five major carriers this quarter, and are doing the work to put our company on the path to sustained profitability."

Amounts include USD52 million and USD12 million of additional revenue within the mainline and regional operations segments, respectively, related to changes in the estimate of the number of frequent flier miles expected to expire. 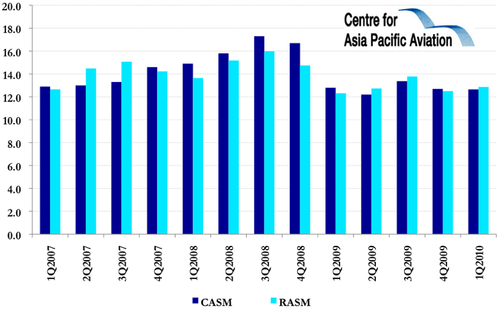 United has completed its annual estimate of the number of Mileage Plus frequent flyer miles that are expected to expire in the future, and reduced its net deferral of revenue by USD64 million for the quarter. The net deferral of revenue is expected to be reduced by a similar amount in the remaining quarters of the year. This reduction of the total net amount of revenue that is deferred to future periods better aligns our results with those of our peers, as United has historically deferred a higher percentage of the revenue it receives.

In addition to rising fuel, the company said airport rents and landing fees created an overall unit cost headwind of about 0.8 points year-over-year during the quarter. This was coupled with rate increases on the completion of the two new O’Hare runways as well as infrastructure projects at Washington Dulles. In addition, the accelerated depreciation requirements of retiring aircraft set to be replaced by its new wide-body order, will cost the company USD24 million this year.

Total non-fuel operating expense increased by $39 million year-over-year in the first quarter, excluding certain accounting charges, or 1.3%, as the company continued its efforts to control costs and increase revenue. Distribution expenses increased $19 million, or 16.1%. The increase in passenger revenue was the primary driver of distribution expense increase. Other operating expense decreased $30 million, or 12.6%. The primary drivers for reduced other operating expense were better operational performance driving reduced interrupted trip expense as well as reduced capacity.

"While there is more work to do, we are encouraged by the significant improvement in all of our performance metrics that our people are delivering across the company," said CFO Mickells. “We improved our cash position, maintained our cost control, accelerated our revenue improvement and generated an operating profit. We made the right decisions to position us to outperform as the economic recovery takes hold, and, as our current results demonstrate, we are well on our way to margin leadership and profitability."

Current trends suggest that 2010 is likely to be a solid revenue recovery year, and we expect to see revenue-related distribution expense and the traffic variable cost from modestly higher load factors and higher cargo volumes rise as a result. We expect these revenue related expenses to drive over a point of increase in overall non-fuel unit cost.