The UK government's decision to help Flybe financially, deferring some of its air passenger duty payments, signals the socio-economic and political importance of regional air services.

It has also prompted criticism from rivals. IAG has complained that the deal breaks EU state aid rules (although, with Brexit imminent, the Boris Johnson-led government may not care). EasyJet and Ryanair have argued that taxpayers should not prop up a rival airline.

The deal is thought to be conditional on Flybe's shareholders (Virgin Atlantic, Stobart Group and Cyrus Capital) investing new capital, less than a year after they bought it. Before the government's intervention, they had appeared reluctant.

After others (Monarch, bmi regional, Thomas Cook) were allowed to go bust, this marks a sharp change of direction by the UK government on bailing out struggling airlines. The case focuses on jobs, regional connectivity (Flybe is the biggest UK domestic regional airline), and Flybe's importance to several smaller airports.

Flybe's change of ownership has not changed its structural problems and neither will this bailout. Instead, a more structural solution would be to split Flybe into three: competing for justifiable subsidy on designated public service obligation routes; operating those routes that can be commercially profitable; and exiting routes with no prospect of sustainable profitability.

According to the CAPA Fleet Database, Flybe is the UK's fourth largest airline ranked by total number of aircraft in service at 13-Jan-2020, with a fleet strength of 73.

On this measure it ranks after British Airways, easyJet and Jet2.com, but ahead of such operators as TUI Airways and Virgin Atlantic.

Flybe is the biggest airline in the domestic UK regional market

In this segment it is the leading airline, number one with 46.4% of seats in the week of 15-Jun-2020. Flybe is considerably bigger in this market than easyJet, which has 37.0% seat share, and Loganair, which has 14.9%. Ryanair and British Airways have only a very small share.

However, although Flybe's position in the domestic regional market is strong, its seat share has fallen from 52.1% two years earlier (week of 18-Jun-2018).

According to CAPA analysis of data from OAG, Flybe will serve 24 UK airports (including Jersey, Guernsey and Isle of Man) in summer 2020 (based on the week of 15-Jun-2020).

This compares with 15 for the UK's flag carrier, British Airways, and 18 for the UK's biggest airline by total domestic seats, easyJet. Only Loganair serves more UK airports, with a domestic network of 33 destinations, including many small Scottish islands.

Flybe served 31 UK airports in Jun-2018. The reduction in this network mainly reflects the end of its franchise agreement with Loganair, which used to fly to several Scottish airports under the Flybe brand and code and now serves them in its own right. 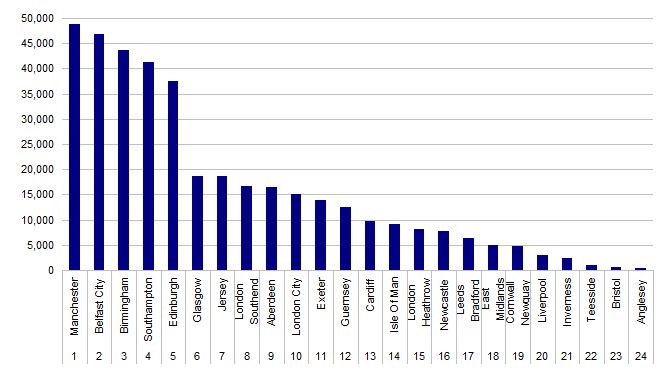 Reordering Flybe's airports according to the airline's share of seats at each location, the following chart ranks airports by the percentage of their capacity exposed to Flybe in the week of 15-Jun-2020.

High up in this ranking are a number of small UK regional airports, including five where more than 50% of their seats are operated by Flybe this summer.

Anglesey heads the list, with 100% operated by Flybe in the summer season. Southampton has a 94% exposure, Belfast City 70%, Exeter 57% and Cornwall Newquay 55%.

Four more airports have between 25% and 50% exposure: Guernsey, Isle of Man, Jersey and Teesside. A further five have 10% or more of their capacity operated by Flybe: Aberdeen, Cardiff, London Southend, Birmingham and London City. 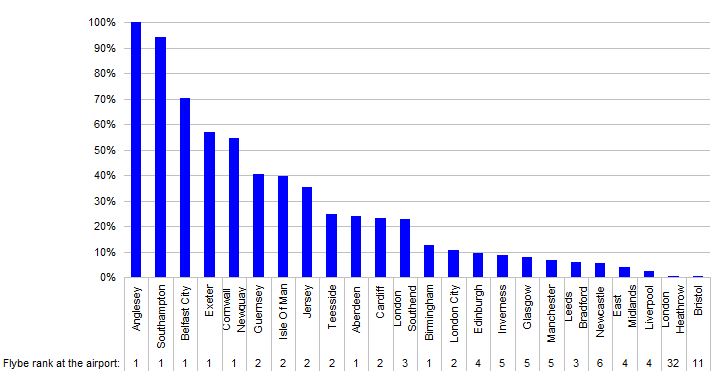 Flybe has been shrinking

This follows a three-year period of enforced growth in 2014-2017 resulting from aircraft orders placed by previous management.

Its fleet reached a peak of 85 aircraft in May-2017 and now has a focus on its turboprop fleet and Embraer E175s, with all its 118 seat Embraer E195s to be returned to lessors. 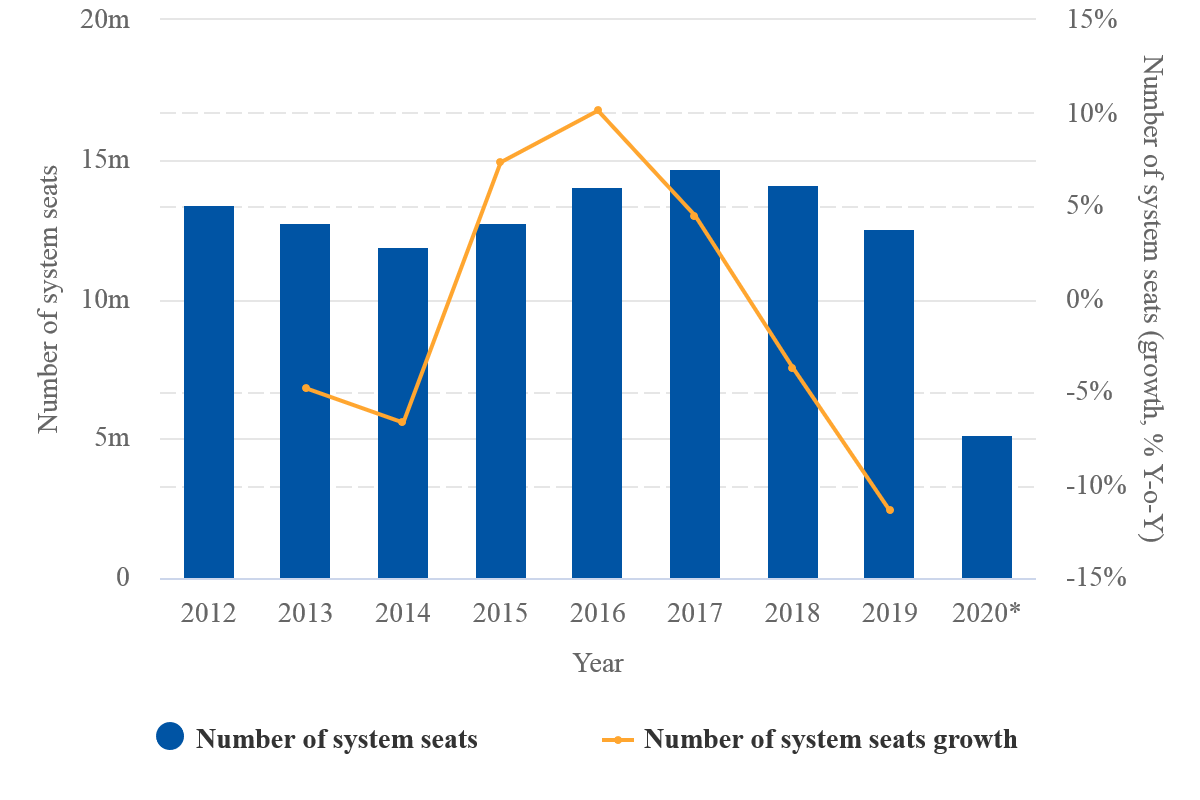 *The values for 2020 are partly predicted and are not complete.
Source: CAPA - Centre for Aviation, OAG.

The Flybe paradox: little competition, but it's a consistent loss maker

Flybe's UK network, particularly away from London, is an important provider of connectivity between the country's different regions. It is the only airline operating on the majority of this network.

For remote destinations, particularly those separated from the rest of the country by water, Flybe is sometimes the only realistic transport option.

The apparent paradox of Flybe is that it faces little competition from other airlines and yet it is a consistent loss maker. It made net losses in six out of the eight years between the financial years 2011 to 2018 (March year end).

However, much of Flybe's network competes with surface transport modes, whether road or rail. Competition from rail is only likely to increase over time, particularly if the UK goes ahead with plans to grow its high speed rail network.

This will increase the number of routes where a train journey is of a similar duration to a flight. Moreover, rail is considered a more carbon efficient mode of transport.

It has a structurally high unit cost, which needs a suitably high yield

On routes where there is competition from airlines, this is often from low cost operators. As a regional airline, Flybe has an inherent disadvantage in that its fleet of turboprops and regional jets gives it a much higher unit cost than LCCs – higher even than larger full service airlines.

Restructuring programmes over recent years have helped, but only at the margins.

The regional airline model works best in geographical niches where surface transport competition is low, where LCCs cannot operate due to infrastructure constraints, or where there is strong demand from higher yield business passengers.

Only in such cases can the high unit cost be offset by a sufficiently high yield.

Flybe is too big

Although network scale can often be an advantage to an airline, Flybe's track record of losses suggests that its network is actually too big.

It does not have a focus on profitable niches but instead has spread itself into too many markets where competition (from surface or air transport) has exposed the disadvantages of its high unit cost. Its fleet and capacity reductions of recent years attempt to address this, but do not appear to have done the trick.

A change of ownership does not automatically change its structural problems.

Since the acquisition by the Connect Airways consortium (Virgin Atlantic, Stobart Group and investment firm Cyrus Capital) last year, Flybe no longer reports its financial results, but the fact that it is again in financial difficulty speaks volumes.

Worse, until the recently agreed deal with the UK government, the new owners were reluctant to invest in order to save Flybe, which suggests a lack of faith.

Over time, network reorganisation and coordination with Virgin Atlantic could lead to better feed and higher yields, but this has not yet started and will take time to produce results - if they ever materialise sufficiently.

Although full details of the rescue package have not been published, it seems unlikely that it will fundamentally alter Flybe's prospects.

A more structural solution would be to divide the airline into three parts, two that would be sustainable and one that would close.

One part would operate routes deemed to be of great public benefit – those providing connectivity to remote regions, known as 'public service obligation routes' – where the government offers subsidies to operators on a competitive basis.

The government could choose to expand the number of routes falling into this category. Its resources would be better spent in this way, rather than through an unfocused bail out of the form that appears to have been agreed.

A second would be profitable routes where Flybe has little or no competition and can profitably operate without subsidies.

The third part would be routes that are structurally unprofitable, whether due to competition from other airlines, significant surface transport alternatives, or a combination. Flybe should exit these routes, allowing the market to pick them up if there is sufficient demand and if other operators can make them profitable.

This three part approach would ensure that regional connectivity requirements are met without artificially propping up any one operator, while also allowing the market to adjust to changing market conditions.

In the absence of a more structural approach to securing Flybe's future, future cash crises seem almost inevitable. The government will be anxious to avoid that, so expect some serious discussions with its equity owners.