No matter how much travel writers, Congress and passengers complain about rising fares, they are still getting a bargain as airline officials know painfully well. Even so, the number of articles proclaiming doom and gloom continue to rise even as the industry has lost more than two decades of pricing power, according to a new analysis by AirlineFinancials.com.

Founder Bob Herbst ran the numbers and concluded that while the US Consumer Price Index increased by 64.1%, comparing 2009 with 1990, the cost of air travel declined by 9.9%. Of critical significance is the fact that this decline comes at a time when prices for other forms of transportation – heavily subsidized rail – have continued to rise. 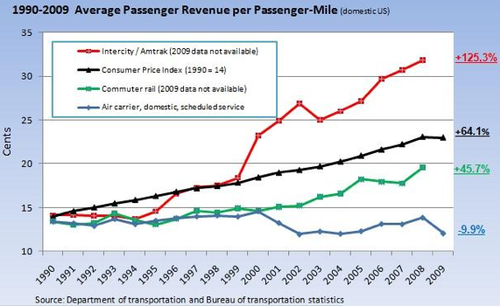 The chart provides average passenger revenue per mile for US airlines, commuter rail, and Intercity/Amtrak travel as compared with the Consumer Price Index from 1990 to 2009.

“In 1990, the average passenger cost to fly one mile in the United States was USD13.4 cents,” said Herbst. “Twenty years later, the cost was only USD12.7 cents per mile. During the last two decades, the average US domestic airline passenger fare measured on a per mile cost basis stayed in a range of 12.0 cents to 14.6 cents.”

He pointed out that these numbers are revenue to the airlines and do not include government taxes, fees, security charges etc that are now approaching 30% per passenger fare.

Putting further pressure on airlines is the impact of frequent flyer and other promotional programmes. While much is made of the front of the cabin, analysis reveals that only about 25% of first-class passengers pay full fare. The rest are upgrades, frequent flyers and airline employees. Some 3.12 million free tickets are issued annually due to frequent flyer miles

The rising tax burden in the US comes at a time when the government of British Columbia is moving to eliminate the provincial aviation fuel tax for trans-border and international flights. In addition, the Vancouver Airport Authority (VAA) is offering a five-year incentive programme allowing air carriers to add capacity to YVR without incurring additional landing and terminal fees. The move prompted both WestJet and Air Canada to boost flights from the airport.

Saretsky said the VAA programme will allow WestJet to grow it services there even more. “WestJet's international presence in British Columbia has grown substantially and this news ensures that with firm orders for an additional 45 aircraft over the next seven years, this growth will continue,” he said. “It is our belief that this news will create jobs and add millions of dollars of economic activity to the province. It is these types of initiatives we encourage other jurisdictions across the country to follow so that all of Canada's aviation hubs will become more competitive internationally." Herbst’s analysis is nothing airline executives don’t already know. Indeed, US Airways Chair Doug Parker makes it a point to drive home this message at every opportunity emphasising that airline fares still represent remarkable value in today’s economy.

Herbst compared fares and the CPI. “If airline passenger travel costs had kept up with CPI inflation over the last 20 years, the average fare to fly one mile in 2009 would have been 22 cents per mile, a 59% increase over the actual cost,” he said, adding that one of the most remarkable statistics is the fact that the industry now has 2% fewer employees to serve a 53% increase in passengers.

While he suggests this is driving the increase in complaints it is likely it has to do with far more than the number of employees.

Herbst outlined the changes in the industry between 1990 and 2009 with what he called “staggering” statistics.

Since January 1, 1990, there have been 98 US airlines file for bankruptcy.