Turkish Airlines yet to make decision on whether to bid for LOT; SAS planning reverse share split

European carriers’ shares moved higher with wider European markets on Friday (26-Feb-2010), following news the US economy grew faster than expected in 4Q2009, with banking and mining sectors leading a rise in the markets. Reports Germany is considering purchasing some of Greece’s bonds as an emergency measure, to help the country out of its sovereign debt problems, also pushed shares higher.

Turkish Airlines (+1.0%) told Reuters over the weekend that it has not yet reached an official decision regarding a potential purchase of LOT Polish Airlines, but the carrier is “open to opportunities for growth”. Media reports stated earlier that the Polish Treasury is holding talks with three carriers, including Turkish Airlines, about a possible cooperation with LOT, as part of its second attempt to privatise the carrier.

SAS (-0.4%) slipped after it reportedly stated it would propose to carry out a reverse share split to reduce the number of shares following a planned rights issue, which is subject to approval at its AGM on 07-Apr-2010. The number of ordinary shares that will be consolidated into one share will reportedly be announced on 06-Apr-2010.

easyJet (+1.8%) meanwhile stated during trading its issued share capital now consists of 428.6 million shares with a nominal value of GBP0.25/share, with voting rights. The increase results from the issue of shares to meet the exercise of options under the company's employee share option schemes. No shares are held in Treasury.

Eurofly (+4.4%) was one of the day’s biggest gainers, moving higher prior to its official merger with Meridiana on 28-Feb-2010 to become Meridiana fly. The merger transaction, which commenced last Nov-2009, has finally come to an end and sees the integration of the airlines' networks, fleets, organisational, commercial and administrative structures. The airline will serve a total of seven intercontinental destinations, 48 international destinations (Europe and surrounding countries) and 32 domestic cities. The "new" Meridiana fly company will have a fleet of 35 aircraft, including 17 MD82s, nine A320s, four A319s and two ATR 42.

Europe Airline Daily reports the latest on what’s happening in the European aviation industry, Other stories in today’s issue include: 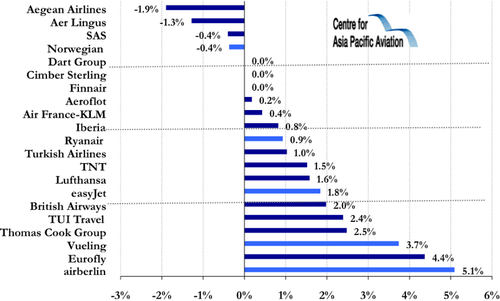