European shares made their biggest daily gain in three months on Wednesday (01-Sep-2010) pushing airline shares higher. Wider markets were up on improved manufacturing data from the US and China.

TUI Travel (+7.5%) rose to its highest in three months on speculation TUI Group is considering acquiring the remaining 45% of shares it doesn’t already own in the company.  However, TUI Group stated during trading that it has no immediate plans to purchase the stake. The company confirmed that the further development of TUI’s tourism business is conditional on the sale of its remaining 43% stake in Hapag-Lloyd. A meeting of the company’s supervisory board is due next week, “to discuss options for the tourism business”.

Another British Airways strike 'an option'

British Airways (+4.3%) also made headway, despite cabin crew union Unite stating a new strike ballot was "always an option" if no progress is made in the ongoing dispute at the carrier. A mass meeting of Unite members is scheduled for 06-Sep-2010. Unite added that it is "working to get talks (with BA management) for as early as possible, hopefully next week, but there's no date in the diary yet".

Iberia (+4.2%) also made strong gains for the day, despite Ryanair (+2.3%) stating it has overtaken Iberia as the largest carrier (by passenger numbers) operating in Spain, based on AENA data. The LCC handled 12.3 million passengers in the seven months to Jul-2010, a 30% year-on-year increase, while Iberia reportedly handled 11.8 million passengers in the period, a 5.7% decline. 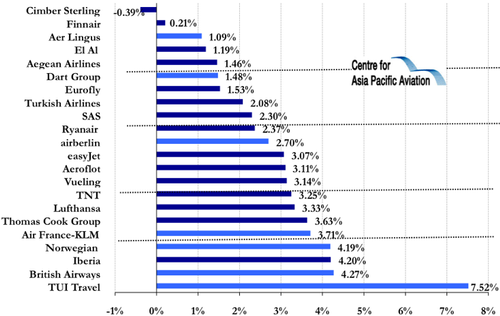