Airlines worldwide reported further increases in air travel and freight volumes in Jan-2011, according to IATA which noted that traffic has rebounded to above pre-recession levels. However, despite the positive start to the year, IATA warned that rising fuel costs are a “big problem” for the industry.

“We begin the year with some good news. January traffic volumes are up - 8.2% on January 2010 and 2.6% on December. With most major indices pointing to strengthening world trade and economic growth this is positive for the industry,” IATA Director General and CEO Giovanni Bisignani said. “We are all watching closely as events unfold in the Middle East. The region’s instability has sent oil prices skyrocketing.”

Mr Bisignani stated surging oil prices due to the instability in the Middle East could create “very, very big challenges” for airlines. “Oil is a big problem because it could change completely the picture” for the sector, he added.

Fuel costs have surged amid concern that the turmoil in Libya will affect supply and IATA estimates that every USD1 increase in the per-barrel price of oil costs the airline industry USD1.6 billion.

IATA in Dec-2010 forecast the industry would report a net profit of USD9.1 billion in 2011 based on oil at USD84/barrel. Crude oil is trading more than USD15 above this level at present at above USD100, near a 29-month high. Oil represents around 27% of airline costs on average. IATA plans to issue a revised 2011 forecast on 02-Mar-2011.

IATA also warned of the negative impact of government taxes. “As if the rising price of oil was not challenging enough, governments are increasing the cost of mobility with a growing contagion of taxes. In 2010 the industry was hit with billions of dollars of new or increased taxes in the UK, Austria and Germany. Now we see South Africa and Iceland planning increases. Governments need to improve their finances and restart their economies. Mobility is a catalyst for economic growth. Governments must understand that taxing air transport out of the range of price sensitive travelers and businesses makes very little economic sense,” Mr Bisignani said. 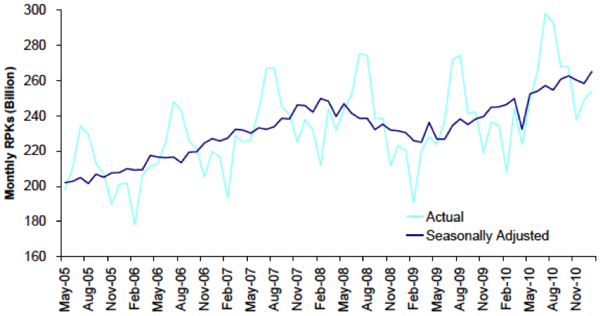 Load factors declined but remain quite high, a sign that yields may start levelling.

This suggests that supply-and-demand conditions may be weakening slightly and that yields may start leveling. Recent US Air Transport Association data shows that year-on-year growth rates of US airlines’ international yields have slowed down to 9% in Jan-2011 compared with growth of 10% in Dec-2010 and 12% in Nov-2010.

Demand and supply conditions for air freight stabilised in Jan-2011. Demand and capacity for freight have been expanding at average year-on year growth rates of 10-11% since Sep-2010 and freight load factor have remained within a range of 52-54% since mid 2010. 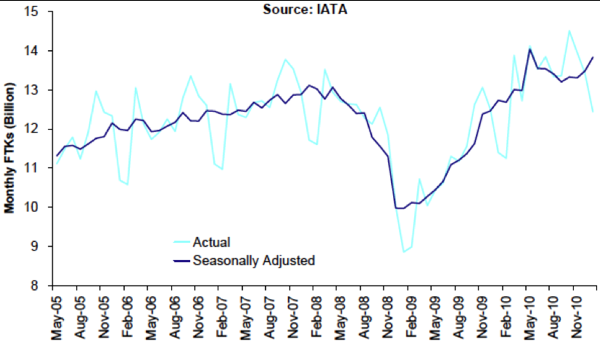 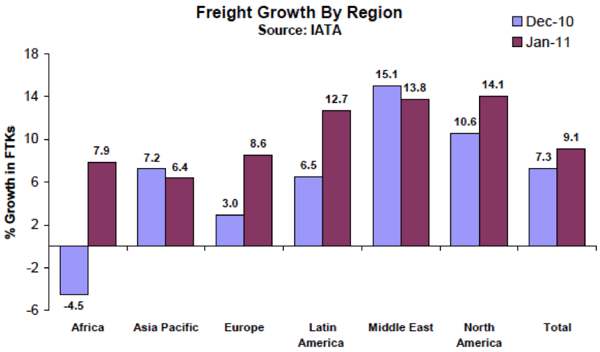 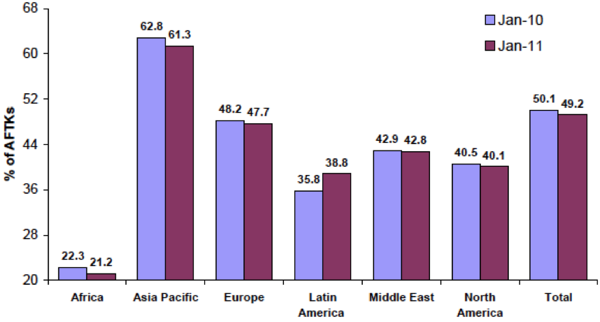 Freight wise, IATA noted that “prospects for 2011 are quite positive”. In Jan-2011, the confidence of manufacturing and service businesses rose to its highest level since Apr-2006. “This suggests that world trade expansion is likely to continue and air freight operations will benefit from the carriage of goods shipped by air to fulfil final consumer demand,” IATA stated.

Air travel and freight rebounded in January having been depressed in Dec-2010 by severe winter weather conditions in Europe and North America. IATA estimates that this weather-related disruption reduced international traffic (RPKs) by 1-2% in Dec-2010.

Compared with Dec-2010 and adjusting for seasonality, air travel grew by a strong 2.6% in Jan-2011 with freight 2.6% higher. This indicates that air travel continued to grow quite strongly, trending at an average growth rate of 8% for over the 12 months to Jan-2011, above the historical long-term trend levels of 5-6%. 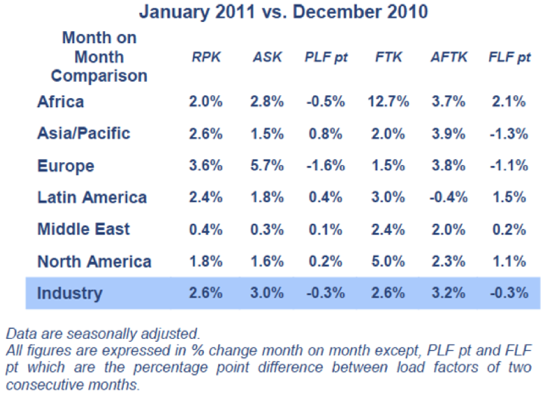 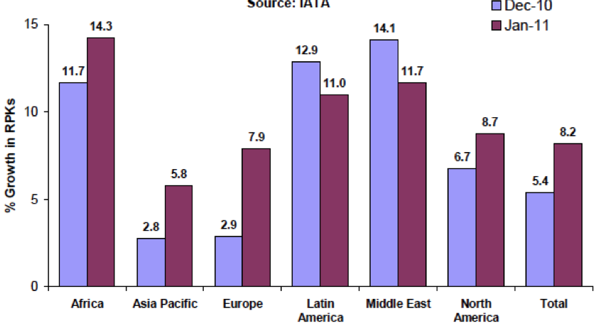 As in the past, there were significant regional differences in the accident rates, with North America having relatively low rates and Africa having the worst rate as follows: 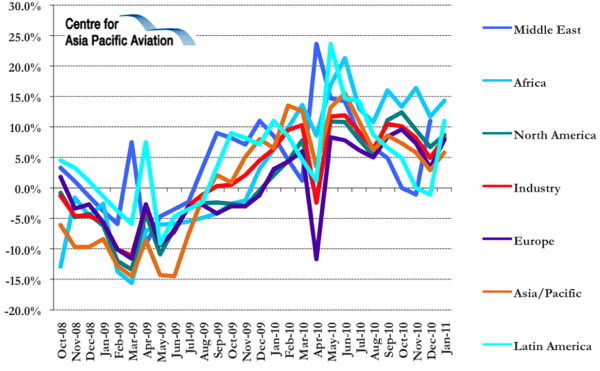 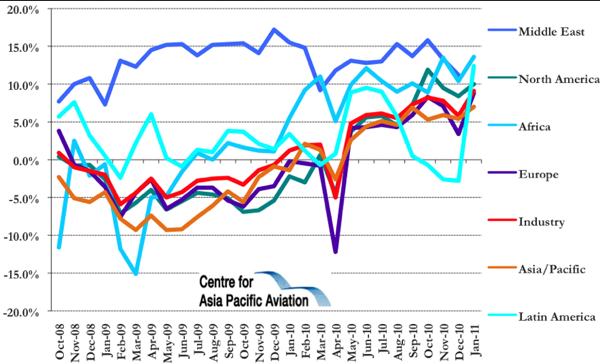 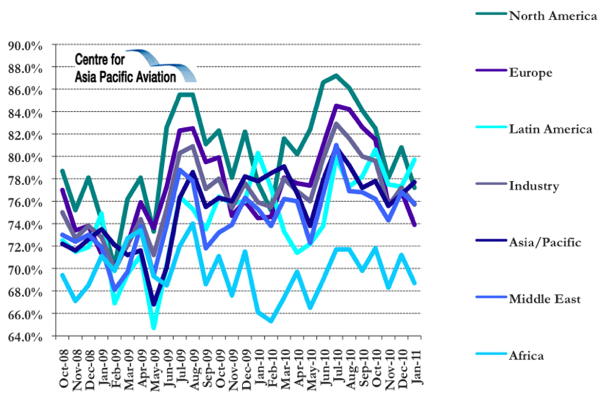 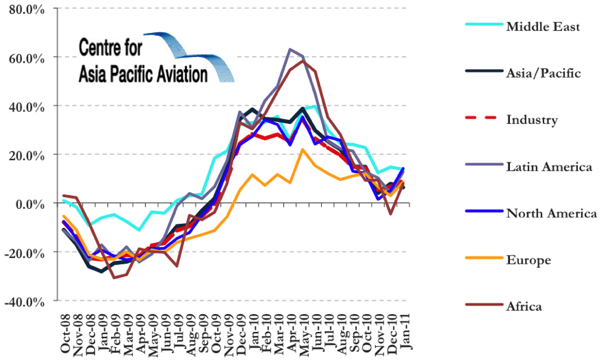