Xian in May-2014 will become Tigerair’s sixth destination in mainland China, three of which have been launched over the last seven months. China has become a focus for Tigerair as it looks for new medium-haul routes to soak up additional aircraft and with rival Singapore-based LCC Jetstar Asia reducing its China operation.

Malaysia-based AirAsia X is adding Xian in Jul-2014 as the AirAsia Group continues to rapidly connect the dots in its mainland Chinese network, which now consists of 13 destinations. Thai AirAsia is currently the only Southeast Asian LCC serving Xian.

Tigerair announced on 14-Apr-2014 plans to begin thrice weekly service on 15-May-2014 between Singapore and Xian in central China. Xian is a new destination for the Tigerair Group and for Singapore Changi Airport.

Xian will become Tigerair’s sixth destination in mainland China, joining Guangzhou, Haikou, Lijiang, Ningbo and Shenzhen. Tigerair launched services to Guangzhou, Haikou and Shenzhen in 2006. After a seven year hiatus from pursuing any expansion in China, Tigerair began serving Lijiang at the end of Oct-2013 followed by Ningbo at the end of Dec-2013.

Singapore’s other local LCC, Jetstar Asia, has been reducing its presence in China, opening potential opportunities for Tigerair. Jetstar currently links Singapore with only three destinations in mainland China – Haikou, Hangzhou and Shantou – as Beijing, Guangzhou, Guilin and Ningbo have all been dropped. (Beijing was served with A330s operated by Australia-based Jetstar Airways while the other former and remaining routes were/are operated with A320s from Jetstar Asia.)

After the launch of Xian, Tigerair will account for about a 9% share of seat capacity between Singapore and China, according to CAPA and OAG data. Jetstar’s share of the market has slipped to less than 4%. 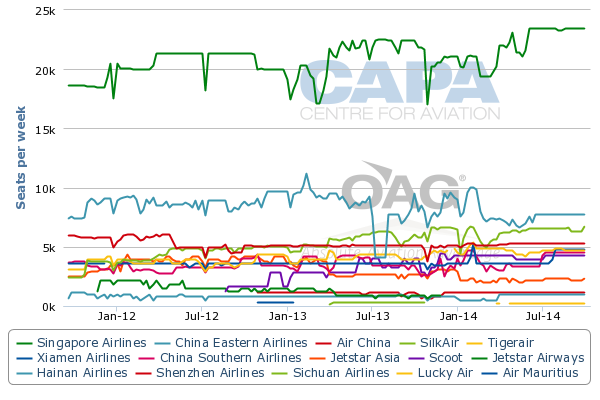 LCCs account for only about 20% of capacity between Singapore and China. Scoot is the third LCC in the market, accounting for about a 7% share.

While Jetstar has struggled in the Singapore-China market, in part because of intense competition from Chinese carriers, there should be opportunities to further develop the market. Tigerair and Scoot both continue to look at new potential destinations in China, with Tigerair focusing on southern and central China and Scoot focusing primarily in the northeast and potentially over the long-term on the more remote west. Scoot, which is seeking anti-trust approval to work more closely with Tigerair, currently serves four destinations in mainland China.

The recent push into secondary Chinese cities has come as Tigerair Singapore has added five A320 family aircraft over the last six months. With Singapore’s short-haul market relatively saturated with most routes currently suffering from over-capacity, the increased focus on China gives Tigerair an opportunity to diversify its network and reduce its reliance on the challenging intra-Southeast Asia market. Southeast Asia currently accounts for about two-thirds of Tigerair’s seat capacity.

Tigerair also launched four weekly flights to Male in the Maldives in late Jan-2014, another medium-haul route which has allowed Tigerair to increase total ASKs without having to increase capacity within Southeast Asia. The Male flight, as well as Lijiang, Ningbo and soon Xian, will operate during the day in both directions, which is unusual for LCC routes of over four hours. Most of Tigerair’s more established medium-haul routes – including Guangzhou, Shenzhen and several Indian destinations – operate during overnight hours.

Tigerair’s decision to go with medium-haul daytime flights could be seen as an indication of excess capacity as the carrier looks for routes to soak up the aircraft added in recent months. The very short lead time on Xian – only one month from the start of ticket sales to launch – is also an indication of Tigerair’s current predicament as it needs to quickly place more aircraft in the already saturated Singapore market due to the return of A319s/A320s from Tigerair Philippines following the recent sale of its Philippine affiliate to Cebu Pacific.

While Tigerair recently deferred nine A320 deliveries for the fiscal years starting 1-Apr-2014 and 1-Apr-2015 the carrier still needed to find markets for the aircraft coming out of the Philippines. Tigerair Singapore should finally be able to take a break from expansion in late 2014 and 2015. But the carrier will still have the option of further growing its medium-haul network by adding overnight flights and potentially transitioning some of its current daytime flights to overnight flights, freeing up capacity should there be opportunities to again increase short-haul capacity.

Tigerair has opportunities for further expansion in China as demand for international services from secondary Chinese cities continues to grow. While Singapore is a popular destination for Chinese tourists, Tigerair has also been working to build up transit traffic. Without connections previously un-served secondary destinations such as Xian would likely not be viable. More secondary Chinese destinations are likely this year as Tigerair referred to Xian in its new route announcement as “our first new route into China for 2014”.

Transit traffic also has emerged as a key component to the AirAsia strategy for expanding to secondary cities in mainland China. While Malaysia-China is a strong and growing market, a destination such as Xian is not viable without connections, particularly for a widebody operator such as AirAsia X.

AirAsia X began ticket sales in Feb-2014 for its new four times per week service from Xian, which will commence on 2-Jul-2014. Xian will be AirAsia X’s fifth destination in mainland China, joining Beijing, Chengdu, Hangzhou and Shanghai.

Short-haul LCC Malaysia AirAsia also links Kuala Lumpur with five destinations in mainland China – Guangzhou, Guilin, Kunming, Nanning and Shenzhen. LCCs currently account for about 55% of capacity between Malaysia and China. While this is a relatively high figure and is close to the average international penetration rate for Malaysia, there are opportunities for more growth, particularly when taking into account the ability of AirAsia to leverage its hub and offer Chinese passengers a wide array of destinations beyond Kuala Lumpur.

Thai AirAsia currently links Bangkok with seven destinations in mainland China – Changsha, Chongqing, Guangzhou, Hangzhou, Kunming, Wuhan and Xian. Thai AirAsia launched service to Xian in late 2012. Thailand-China is a large and fast-growing market with huge opportunities for LCCs, which currently account for only about 15% of seat capacity between the two countries.

Of the 13 AirAsia Group destinations in China, four will be served from both Bangkok and Kuala Lumpur following the AirAsia X entrance into the Xian market. The new Kuala Lumpur-Xian route is the latest example of AirAsia looking to leverage its presence in existing Chinese markets by connecting more dots.

In addition to new routes from existing Chinese destinations, the AirAsia Group is working to develop traffic between China and destinations beyond its hubs. AirAsia X is particularly trying to promote China-Australia connections as part of a broader push into the North Asia-Australia market. AirAsia X has nearly doubled its capacity to Australia over the last year and recognises the local Malaysia-Australia market is not able to fully absorb the increase.

Xian is a relatively small market for a high density widebody aircraft but by offering a large array of connections to Southeast Asia (on AirAsia) and Australia (on AirAsia X) the route should be viable. AirAsia should be able to undercut existing competitors on one-stop markets from Xian and stimulate new demand, particularly among the region’s fast growing middle class population. The fact AirAsia already had a presence in Xian and has quickly become a recognised brand in the broader Chinese market should help the group market Kuala Lumpur and beyond to the local population.

International LCC capacity at Xian to more than double

In Xian, Thai AirAsia is currently one of only three foreign LCCs along with South Korea’s Jin Air and Air Busan. 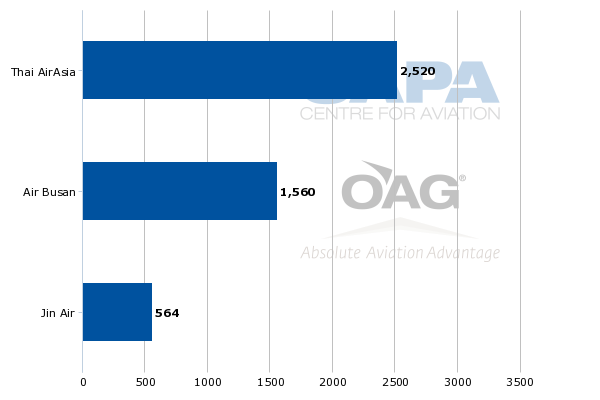 The launch of services by Tigerair and AirAsia X will more than double international LCC capacity at Xian from about 4,000 weekly seats to nearly 9,000. The upcoming capacity increase will position Xian as the fifth largest international LCC airport in China, up from its current 11th position.

There is huge opportunity for LCC expansion at virtually every airport as they are all relatively under-served. About half of the airports now have fewer than one international LCC flight per day.

Xian’s total international capacity (including FSC capacity) will also increase by over 20% to about 26,000 weekly seats as AirAsia X and Tigerair enter. LCCs will account for about one-third of total international seat capacity, giving Xian the highest international LCC penetration rate among major Chinese airports. 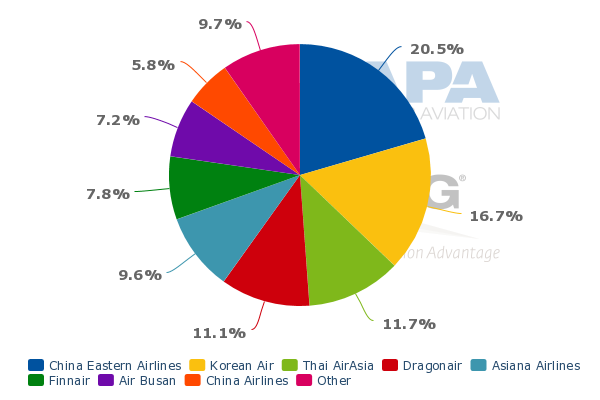 Xian has the potential to become a strong inbound and outbound market.  It is an ancient city with several popular tourist attractions including the original Terracota Army statues, a UNESCO world heritage site. Xian is also a fast growing city with a population of over 8 million.

Located in the middle of China, Xian is a domestic hub and serves as a gateway to the more remote secondary cities further west, such as Urumqi, which are not yet served by foreign LCCs. China Eastern has a hub at Xian, with about 40 domestic routes and international services to Hong Kong and Taipei (as well as seasonal services to Krabi and Siem Reap). Urumqi, which is the third biggest destination from Xian after Beijing and Guangzhou, is served by eight Chinese carriers including LCC Spring Airlines.

With the right connections and marketing, Xian should be able to support the sudden surge of LCC capacity from Southeast Asia and potentially more new services over the medium term. With the regional Southeast Asian market becoming increasingly competitive, secondary markets in China such as Xian while potentially challenging are becoming more attractive to LCC groups.