Recently, CAPA - Centre for Aviation reported on interest allegedly coming from Saudi Arabia’s Public Investment Fund, a sovereign wealth fund (SWF), in London Heathrow Airport where Ferrovial may sell some or all of its stock.

The Saudis are not yet committed to the airport sector in the UK (while they are to sport – Newcastle United Football Club, and Abu Dhabi owns Manchester City), but they must have noticed that six SWFs already are part-owners of three London airports.

In fact, London is the nexus of financial sector interest in airports – partly on account of London being one of the leading centres in the world for such activities, as well as collectively the world’s biggest hub for air transport activities. Not to mention that it is open to foreign business.

If there is to be further airport M&A activity from SWFs it is in cities like London where it is most likely to happen. Conversely, there is no set pattern otherwise to those investments elsewhere, and half of the Top 15 SWFs aren’t directly into airports at all.

The nature of the airport investor continues to change

In the CAPA Research Publication ‘Airport Finance & Privatisation Review 2018’, published in Sep-2018, the evolving nature of the airport investor was analysed.

That nature has changed and continues to do so. In the late 1990s and early 2000s the investment scene was dominated by large airport operators, most of them from Europe (AdP, BAA, Flughafen Zürich, AENA, Fraport, Copenhagen Airports etc.), though some Asian and US airports were early adopters too, along with the likes of surface transport and real estate companies. Some of the former were still seeking investments at that time (though not so much the American ones) and had been joined by a raft of new ones.

In 2018 the picture was quite different. Many of the entities listed in the CAPA Airport Investor Database by then were funds of one kind or another: general investment, pension, hedge, private equity, sovereign wealth and so on. These funds had constituted the fastest growing segment for some time.

Biggest investor increase in private equity segment, but SWFs creeping up in prominence

Since the previous report the greatest increase had been noted in the Private Equity, Hedge Fund and Venture Capital segment, from 36 to 47 (+30%), and specifically from the entrance of more private equity funds rather than the other two subsegments.

The number of Sovereign Wealth Funds had crept up from 11 to 14 (+27%), and there was a gain of one Pension Fund. General and Infrastructure funds increased their presence from 36 to 39 (+8.3%). The chart below represents the weight allocated to each investment category at the time. 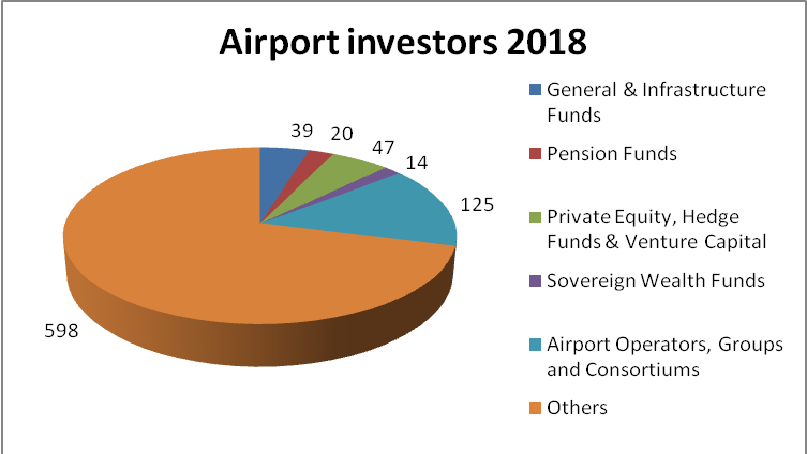 Of a total of 843 investor profiles

That table continues to evolve of course. There are now 1071 individual investor profiles in the database (week commencing 05-Sep-2022), up from the 843 in 2018, of which 18 are sovereign wealth funds that are known to CAPA (1.68% of the total) and which either are direct investors in the airport sector or have considered it. There may be more. Such funds can invest into real estate indirectly by way of the alternative investment market, for example: private equity and hedge funds, and their presence consequently hard to detect.

In the light of recent speculation concerning the intentions of the Qatar Investment Authority in respect of airports in Pakistan - discussed in Qatar Investment Authority considers investments in Pakistani airports, and about the possible purchase of Ferrovial’s stake in London Heathrow Airport by a consortium that might include the Saudi Arabia Public Investment Fund, as discussed in Ferrovial to sell stake in London Heathrow? Part one – French and Saudi interest in 25% ownership. This is an opportune moment to examine the largest such funds and what investments into the sector they have made or considered.

Firstly, to establish what a sovereign wealth fund is.

Airports historically appealed to SWFs owing to their longevity, multitude of revenue streams and alternative use options

In the transport business airports are probably the most appealing investment to SWFs because of their longevity, the multitude of potential revenue streams they offer beyond the core one, and because of the alternative uses land can be put to, from commercial estates and solar power farms to full-blown ‘airport cities.’

On the other hand, SWF investments may be tempered more than from any other financial segment by failure to adhere to ESG principles, and particularly ‘Environment.’

The Top 15 SWFs as measured by assets under management are listed below.

The largest sovereign wealth funds worldwide as of Jun-2022, by assets under management (in USD billion) 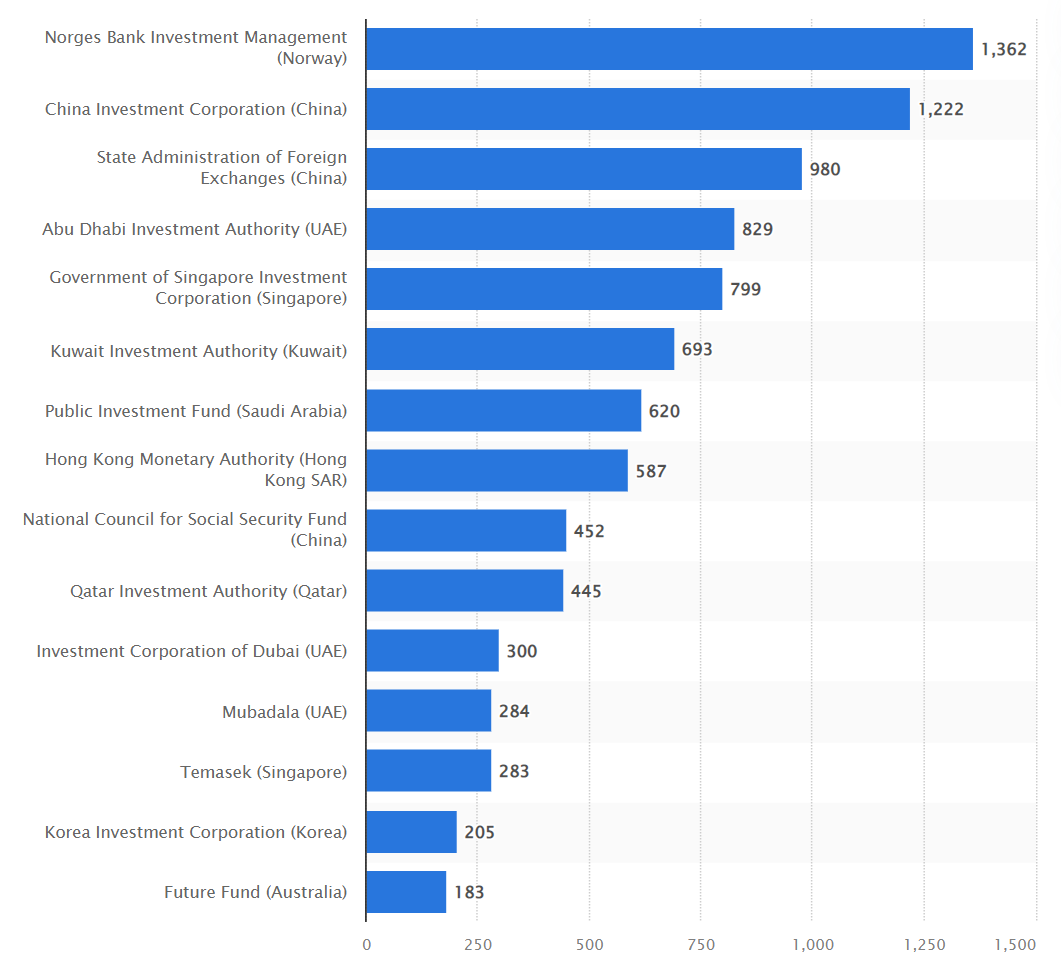 CAPA report investigates each of the Top 15 SWFs

In a special report, CAPA investigates each of the Top 15 SWFs. You can download it here: The world’s biggest sovereign wealth funds and their investments into airports