Many LCCs around the world offer "zero fares: pay only the airport fees". Undoubtedly most of the airline industry frequently feels that it is working for airports, to provide them with profits. The equation is much more complex, but as more and more airlines slip into losses, the confrontation with airports intensifies.

The issue reached another level this week after the Association of European Airlines (AEA) published a press release, “Airports fly in the face of economic reality”, which elicited a fierce response from Airports Council Europe. IATA has weighed into the matter with a detailed assessment of airport charges stretching back to 1990, citing ICAO data.

The Centre’s recent survey of airport charges, published in May-2009, showed airport charges are being revised downwards to attract new airlines and city pairs, or even just to retain existing business, but there were some notable charges increases. Overall, the number of reported instances of charge reductions (23) was slightly more than that of increases (21), according to The Centre’s survey.

to their airline customers in order to compensate themselves for lower traffic levels during the current recession”.

With few “honourable” exceptions, a fired up AEA Secretary General, Ulrich Schulte-Strathaus, added, “airports are jacking up their fees, while national authorities are stalling on implementing the EU Airport Charges Directive”, which will require fees to be independently regulated in a transparent and consultative process.

As the global economic crisis wreaks havoc on airline earnings, relationships between the sector and its suppliers and key partners are fraying - even where airport shareholders include airlines.

The AEA focused its attention on Germany, in particular Frankfurt Airport, which, according to the AEA is proposing an 8.4% increase in charges next January, to fund future expansion, while Munich Airport plans a 4% increase. The AEA also highlighted increases at London Heathrow, Paris Charles de Gaulle, Copenhagen and Marseille airports.

Time for a change in strategy for Lufthansa: to sell Fraport?

The timing is interesting, particularly the German context, which headlined the AEA’s attack. Lufthansa has stated this week that another deep round of cost cuts will be announced in coming weeks – and job cuts have been flagged. With Germany going to the polls in Sep-2009 and employment a central issue in voters’ minds, a Lufthansa/AEA attack on Fraport/Munich is well timed, but raises some bigger issues.

Lufthansa has a stake in Munich Airport's Terminal 2 and owns a 9.1% strategic stake in Fraport (up from its initial 4.95% stake acquired in Oct-2005). The relationship between Lufthansa and Fraport was forged to “intensify our partnership with Fraport and lastingly strengthen our airline's position at the major Frankfurt hub," according to Chairman and CEO Wolfgang Mayrhuber, at the time of purchase. He added, “competition in the industry is no longer between airlines and alliances, but between air traffic systems in their entirety, encompassing airlines, airports and air traffic control”.

This grand concept has failed to materialise, with repeated delays to the privatisation of Deutsche Flugsicherung and an evolution in Lufthansa’s own priorities as cross-border airline consolidation opportunities arose. The acquisition strategy is capital intensive at a time when the economic downturn is tipping Lufthansa into losses for the foreseeable future. This is a time to be focusing on core activities.

Lufthansa booked a EUR140 million "impairment charge" on its Fraport stake in 1Q2009, as Fraport's shares lost around 35% of their value over the previous 12 months.

AEA’s Mr Schulte-Strathaus stated that Frankfurt Airport “could do with a reality check”, adding “its customers are struggling to survive in the current market and the very last thing they need is a cost increase”. He is unlikely to be making such statements without prior consultation with one of his major airline members.

ACI-EUROPE responded immediately that the AEA’s statement reflected a “worrying misunderstanding of airport economics and the impact of the crisis on the whole aviation industry”.

The airport body explained that European airports are being “hit by a double whammy: steeply decreasing aeronautical and commercial revenues as a result of fewer flights with fewer passengers and sharply increasing financial costs as a result of the credit crunch”.

In response to “fast shrinking” profitability, said ACI-EUROPE, airports across Europe are “now focusing on cost-cutting and restructuring, including staff reductions”.

ACI-EUROPE provided a case-by-case rebuttal of the examples cited by the AEA, led by the German airports. Again, it is unlikely the body would have acted without consultation with its airport members.

In the Frankfurt Airport case, ACI-EUROPE noted the proposed 8.4% charges increase “is aimed at financing part of a massive and unprecedented EUR7 billion capital expenditure programme, to allow the airport to address its current lack of capacity, increasing it to 88 million passengers by 2020 - thus accommodating requests and plans from the hub carrier and other airlines” (emphasis added).

The airport body added the programme involves a new runway (2011) and several Terminal expansions, “including a new Pier at Terminal 1 for nearly EUR700 million (2012) exclusively dedicated to the hub carrier“. It went on, “while Frankfurt Airport was willing to defer the new Pier and the related investment to reflect exceptionally challenging trading conditions, the hub carrier insisted on maintaining the planned schedule”.

At Munich Airport, ACI-EUROPE noted the proposed 4% charges increase is “presently under discussion between the airport and the airlines, and is aimed at recovering only part of existing operating costs”, adding the airport has “never recovered its total cost of capital on a cumulative basis”. And in another reference to Lufthansa, ACI-EUROPE noted Munich Airport’s capital investment programme “presently stands at EUR2 billion, to finance a substantial increase in capacity (new runway and terminal expansion) which is being called for by the hub carrier and other airlines” (emphasis added).

The pointed references to Lufthansa appear to be clearly intended to embarrass "the hub carrier"; presumably to gain some support from the airline side.

IATA stated, “during the 1991-3 economic recession, average user charges, in nominal terms, rose by about 19% (with en-route charges increasing at a higher rate than landing and airport charges), while over the same time period, non-infrastructure airline unit costs decreased by 2%”.

The industry body added, “if the experience of early 90s economic downturn is repeated, user charges may rise once more during the current recession”. 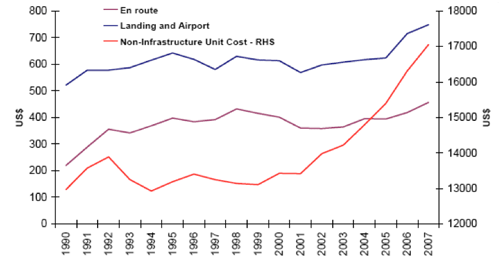 This is only one battle in what is promising to be a gruelling war. The two sides are well defined, but ACI-EUROPE's tactic of putting the spotlight on "the hub carrier" may well create some divisions.

Whether the combination of political pressures (to save jobs) and embarrassment factor on Lufthansa will provoke a diverstiture of the carrier's share in Fraport remains to be seen. But it will surely be one more unwelcome matter for the Board to review.