Thai Airways' regional full service subsidiary Thai Smile is expected to accelerate international expansion over the next year as Thai Airways transitions to an all-widebody fleet. Adjustments in the group’s dual brand strategy are also possible as Thai Airways and Thai Smile could benefit from much closer integration.

Thai Smile currently only operates four international routes and allocates 90% of its seat capacity to the domestic market. However, the airline is poised to take over Thai Airways’ four remaining international narrowbody routes and should be used to expand the group’s presence in secondary cities in China, India and ASEAN.

This is the second part of a report on the Thai Airways Group's regional international network and strategy. The first part looked at how the group has fallen behind its rivals in Southeast Asia – particularly the Singapore Airlines Group – in improving regional connectivity. In this second part CAPA focuses on the strategy for Thai Smile and how the Thai Airways group could finally start to use Thai Smile to bolster regional connectivity. 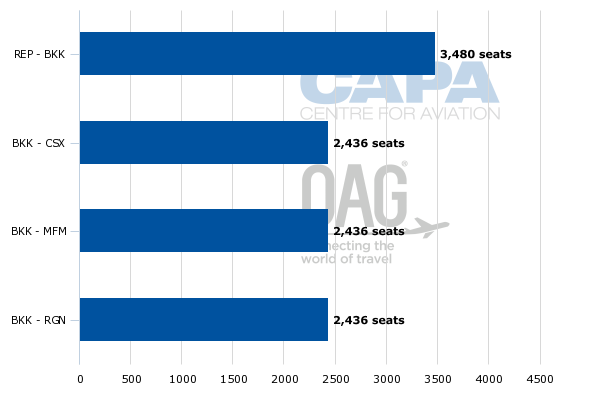 Siem Reap and Yangon are Thai Smile’s most recent route launches. Siem Reap commenced in Dec-2015 and is served with 10 weekly flights, while Yangon is served with one daily flight. Thai Airways currently serves Yangon with two daily widebody flights.

Thai Smile has made multiple adjustments to international network

All the suspended Thai Smile routes were new markets for the group. Thai Smile may resume service to Ahmedabad, Luang Prabang and Mandalay as it starts to focus more on international expansion. Resumption of the Phuket routes is not under consideration, since Thai Smile is now focused on feeding Thai Airways at Bangkok Suvarnabhumi rather than again experimenting with international point-to-point routes.

Bangkok-Chongqing was initially launched by Thai Smile in Oct-2013 and is currently operated by Thai Airways using A320s that were initially intended for Thai Smile. Chongqing is expected to be transferred back to Thai Smile, which has also been evaluating new potential secondary markets in China.

Using Thai Smile to expand in China is necessary if the Thai Airways Group is to succeed at increasing its share of the fast-growing Thailand-China market.

The Thai Airways Group currently has seven destinations in mainland China and eight routes to China (Kunming is served from both Bangkok and Chiang Mai). AirAsia currently has 20 routes between Thailand and China including 12 from Bangkok. (The two groups differ in their equipment type and frequencies).

The Thailand-China and Singapore-China outbound markets are similar in size and relatively small (less than 1 million annual passengers). However, Singapore attracts significantly more China-origin international transit traffic than Bangkok. A very small proportion of Thai’s China traffic now connects to other international destinations. The Thai Airways group is keen to carry more Chinese passengers on its regional international network as it expands its Chinese network.

A larger presence in ASEAN is sensible as Southeast Asia is a growing market for both outbound and inbound travel. More secondary destinations in the region could help the group's European sales as it would be able to offer more destinations that are not served by competitors from the Gulf. Thai would also be able to enhance its position in the highly competitive Australia market and offer more connections from India.

Siem Reap in Cambodia highlights the opportunities that are available regionally for the Thai Airways Group. Siem Reap is a relatively big and fast-growing inbound market with approximately 3 million annual passengers. However, until a few months ago it was served by SilkAir and Malaysia Airlines but not Thai Airways – although Bangkok is much closer to Siem Reap than Kuala Lumpur or Singapore.

Bangkok-Siem Reap is only the twelfth international route within Southeast Asia served by the Thai Airways Group.

Thai Smile is also expected to take over Thai Airways’ service to the Cambodian capital Phnom Penh. While the group is new to the Siem Reap market it is one of the most established players in Phnom Penh.

Bangkok-Phnom Penh is currently served by Thai Airways with 17 weekly A320 flights. Thai has more flights to Phnom Penh than any other foreign airline except SilkAir.

The group is eager to transfer all these routes to Thai Smile along with the four A320s currently operated by Thai Airways. The group currently has a fleet of 20 A320s which were originally ordered for Thai Smile during the pre-launch phase. However, in 2014 the group had to start allocating a portion of the A320 fleet to Thai Airways after Thai Smile was unable to secure approvals from foreign authorities in some markets.

The group confronted unexpected regulatory restrictions after Thai Smile secured its own operator's certificate, requiring a new set approvals from every country that Thai Smile was already serving, or planned to serve, since all the original approvals were under the Thai Airways operator's certificate. The group does not face any regulatory restrictions on domestic route transfers but Thai Airways has been operating some domestic flights with A320s for better utilisation of the A320s that it has been operating internationally.

The A320 operation at Thai Airways was always considered temporary but has lasted longer than expected. The group continues to work on securing the required authorisations to enable Thai Smile to operate all the group’s intended narrowbody routes.

Thai Airways to transition to all-narrowbody fleet in 2017

Thai Airways also has a fleet of two 737-400s which are slated to be retired in 2017. These aircraft are currently used to operate two daily flights from Bangkok to the Thai island of Samui, and two daily flights to Vientiane in Laos.

Finally the group is hoping to be able to transfer the Phnom Penh and Vientiane routes to Thai Smile within the next several months. Penang is also expected to transfer to Thai Smile as Thai Airways transitions to an all-narrowbody fleet.

Transferring all of Thai’s A320 and 737 flights to Thai Smile will improve the group’s profitability as the Thai Airways narrowbody operation has significantly higher costs than Thai Smile’s A320 operation. Thai Smile should also enable the group to launch new international routes that would not be viable under Thai Airways mainline.

The group plans to resume expansion in 2017, having completed the initial phases of its transformation plan. While new or resumed long haul routes are also in the pipeline, the biggest opportunities are in the regional international market. Thai Smile is the better platform for pursuing these opportunities as most of the potential new markets in China, India and Southeast Asia are too small for widebody aircraft.

Thai Smile does not currently have sufficient capacity or the model to exploit these opportunities fully. But adjustments in the group’s fleet plan and dual brand strategy are inevitable, and would provide the framework needed for the group to grow regionally.

The group has taken a rather odd approach to the dual brand strategy by separating Thai Smile and Thai Airways sales functions. While the two airlines do codeshare Thai Smile has a different reservation system, which complicates cross-selling.

In some overlapping markets the two airlines are not well integrated and are sometimes even cannibalising each other. For example, when Thai Smile entered the Yangon market in late 2015 it opened its own sales office.

SIA and SilkAir take a much more sensible approach to overlapping markets by having just one sales office. SIA and SilkAir are also completely integrated from a sales perspective. Thai Airways should embrace this kind of approach. Thai Smile has a full service product – it offers complimentary snacks, drinks, luggage, and seat assignments along with Thai Airways frequent flier miles – but the commercial strategy is far from ideal.

A new fleet plan for Thai Smile is also necessary. The Thai Airways Group A320 fleet has expanded rapidly since the initial batch of four aircraft was delivered in 2012. Six aircraft were added in 2013, followed by seven in 2014 and three in 2015 (including two in 4Q2015). However, the group currently does not have any commitments for additional A320s or any other type of single-aisle aircraft.

The group can still expand regional operation over the next year by improving utilisation A320 utilisation rates. The Thai Airways A320s are particularly underutilised and will be used more once they transfer over to Thai Smile. The aircraft already at Thai Smile are also expected to be utilised more as more international routes are launched, particularly overnight flights to China. The current domestic focus limits utilisation of nearly the entire fleet to daytime hours.

However, the ability of the group to expand using the existing 20 A320s is relatively limited, particularly when it is taken into account that the narrowbody fleet will shrink by two aircraft when the last 737-400s are retired in 2017. Thai Smile will need a larger fleet if the group is to exploit the opportunities in the short haul international market fully.

In addition to several more A320s, two A319s may be acquired in order for the group to maintain its current Samui operation. Samui Airport currently cannot handle A320s – only A319s or 737-400s.

Bangkok-Samui is one of only four domestic routes still operated by Thai Airways, along with Bangkok to Chiang Mai, Krabi and Phuket. Bangkok-Krabi, which is currently operated with three daily A320 flights, is also expected to be transferred again to Thai Smile. (Thai Smile initially launched Krabi in 2012.)

Thai Smile operates another 11 domestic routes that are not served by Thai Airways. Of these 11 routes seven were transferred to Thai Smile: Bangkok Suvarnabhumi and Chiang Rai, Hat Yai, Khon Kaen, Surat Thani, Ubon Ratchathani and Udon Thani; and Chiang Mai to Phuket.

In 2015 Thai Smile also launched a new route from the group’s Bangkok Suvarnabhumi hub – Narathiwat – and in 2014 it launched three domestic point-to-point routes from Bangkok Don Mueang – Chiang Mai, Khon Kaen and Phuket. The three destinations from Don Mueang are also served from Suvarnabhumi, but at Suvarnabhumi Thai Smile’s focus is to feed Thai Airways.

Nok is the more appropriate brand for the point-to-point market and growing the Thai Airways’ Group market share at Don Mueang. Thai should view Nok as its response to the intensifying competition from LCCs. Instead it currently sees Nok as a completely separate and independent LCC.

Using Thai Smile in the sector Nok now competes in does not make sense. Thai Smile should be focusing on its feeder role, particularly given the challenges Thai Airways currently faces.

Thai Smile has had many twists and turns since it was first conceived four years ago. It is time for the group to decide on a coherent strategy for its regional subsidiary once and for all.

Thai Smile now allocates over 20% of its total seat capacity and three of its 16 A320S to Don Mueang. Transferring these three aircraft and the associated capacity to Suvarnabhumi would be sensible. The group strategically needs to expand its short haul international network from Suvarnabhumi.

Thai Airways has fallen behind its Asian rivals in leveraging its hub to become a stronger regional player. As the group completes its attempt at transformation and starts to evaluate expansion opportunities, regional growth should be the priority.