Meanwhile, two of China’s big three airlines, China Eastern (+3.8%) and China Southern (+3.6%) gained on improved profit expectations, as the Chinese domestic market holds up. On 20-Apr-2010, the CAAC reported a combined profit for Chinese airlines of CNY2.7 billion for Mar-2010, more than double last year’s level. China Southern, due to report today, stated last week that, after a profit in full year 2009 (bolstered by a large government package), “the Group is confident of ongoing improvement in its operating performance”, projecting a “400%” improvement in profit for the first quarter. In the first quarter of 2009, China Southern made a profit of CNY222 million. The profit projection however includes an undisclosed amount from the disposal of the carrier’s 50% interest in MTU Maintenance Zhuhai to the China Southern Air Holding Company.

Continuing demonstrations and yesterday’s three deaths and many injuries from grenade attacks in Bangkok’s downtown area have ignited the fragile situation in Thailand’s capital, with several foreign governments now issuing travel advisories. The situation in the ongoing street protests against the incumbent government appears to be deteriorating, with a possible flashpoint looming. Thai Airways, which has weathered these disruptions reasonably well over the past year, suffered a 4.2% fall in its share price yesterday.

More falls can be anticipated as the protests become more vociferous. However, for the time being at least there is no apparent intention to spread the unrest to occupation of Suvarnabhumi Airport, as occurred last year. 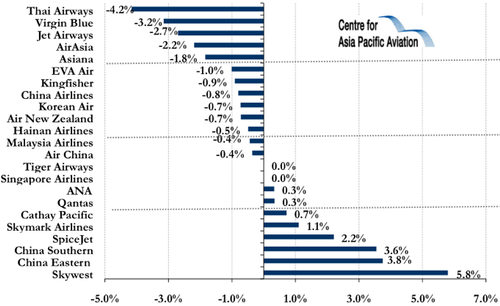