Brazil’s political unrest and severe economic deterioration have essentially closed off credit markets to companies based in the country. One of its largest airlines, Gol, was fighting losses as Brazil’s economy started its slow downward trajectory, beginning in 2012. By mid-2015 Gol was forced to undertake a restructuring that included equity injections, renegotiating with suppliers, and, more recently, an attempt to restructure unsecured bonds, which the company stresses is crucial for completing all the facets of its restructuring.

Aside from attempting to create a reasonable financial foundation to weather the economic crisis, Gol continues to cut its capacity and has suspended eight routes in its network. However, Gol argues that its smaller Brazilian competitors have continued to expand their capacity, which has offset the benefits of capacity reductions undertaken by Brazil’s largest airlines – TAM and Gol.

Gol has suffered on all fronts from Brazil’s economic crisis, which shows no signs of improving for at least two more years. It is tough to predict the composition of Brazil’s aviation industry at that time, but Gol, with some help from its partner Delta, is working feverishly to ensure that it retains its leadership position in the market once the recovery begins.

After posting 8% GDP growth in 2010 Brazil’s economic growth began to deteriorate, culminating in a 4% contraction in 2015. Current forecasts show another 4% decrease for 2016. At the same time, the BRL started a steep descent against the USD, creating significant challenges for companies with high levels of expenses denominated in the USD. 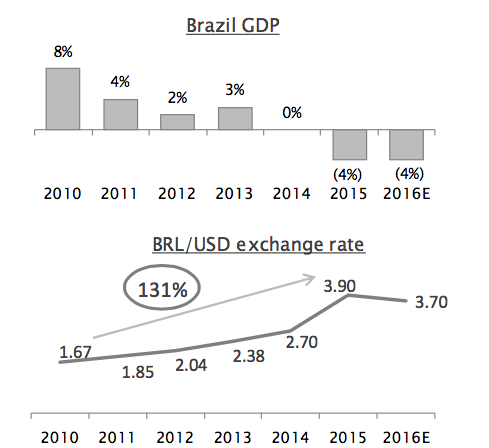 Recently the Gol CEO, Paulo Kakinoff, stated that the BRL had fallen 37% against the USD in 2015, and even as fuel prices fell 48%, “our fuel expenses dropped only 14%” due to the currency devaluation. No signs of improvement are emerging in 2016 as the exchange rate remains high and inflation is projected at 7%. 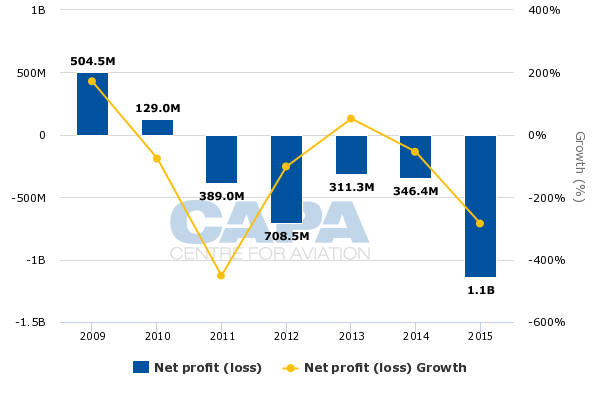 As a result of the worst economic crisis Brazil has suffered in decades, credit markets for Brazilian airlines are essentially closed. “Lenders, lessors, and fuel providers either increased their cash collateral requirement or reduced payment flexibility, sometimes both, negatively affecting our available cash,” said Mr Kakinoff, adding, "Gol’s restricted cash more than doubled from the end of 2014 to the end of 2015”.

Since Jul-2015 Gol’s credit ratings from agencies Fitch, Moody’s and S&P have declined an average of four notches, which has restricted Gol’s access to capital and increased the cost of it.

In 2015 Gol undertook a restructuring to address BRL17 billion of debt and other financial obligations. By YE2015 the company had received a BRL446 million (USD123 million) equity injection from its controlling shareholders and Delta Air Lines, which has a 9.5% stake in Gol. The airline also secured a BRL1.1 billion (USD304 million) loan guaranteed by Delta and achieved BRL300 million (USD83 million) in cost savings through negotiations with suppliers.

See related report: Tough conditions in Brazil continue to hurt Gol despite its efforts to clean up its balance sheet

During 2016 Gol has returned five Boeing 737 narrowbodies; two were authorised, and the company forged sale/leaseback agreements for the remaining three that generated BRL212 milion of cash inflow during Feb-2016.

Gol is in the process of holding talks with lessors to renegotiate its commitments regarding lease agreements – including aircraft returns, reducing monthly rates and deferring payments.

The company aims to reduce its fleet by 21 shells, which should generate savings of BRL220 million (USD61 million). Additionally, Gol has sold its rights to three aircraft deliveries scheduled for 2016 and has revamped its delivery stream to freeze new deliveries until mid-2018. Boeing’s decision to allow Gol flexibility in its delivery stream results in BRL550 million (USD152 million) in relief.

Gol's fleet projections as of mid-May-2016

Gol was a first mover in reducing its capacity in the Brazilian domestic market as economic conditions worsened, but its smaller competitors Azul and Avianca Brazil have continued to grow in order to expand their market share. Between 2011 and 2015 Gol and TAM combined cut their domestic ASKs by 27%. In contrast, Azul and Avianca Brazil posted a combined 292% growth. 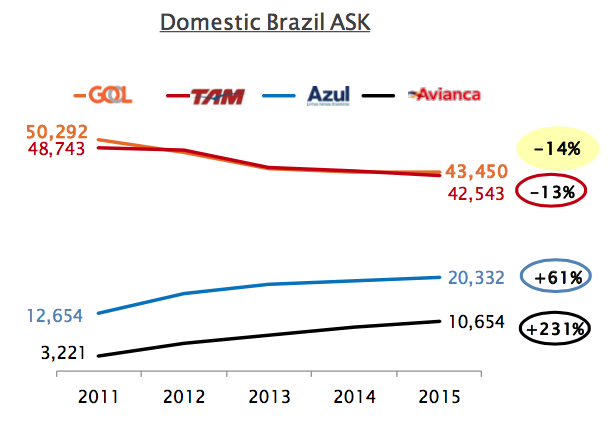 “Overcapacity in Brazil has added pressure on Gol...While the company has been very disciplined, others have not”, Mr Kakinoff has said. 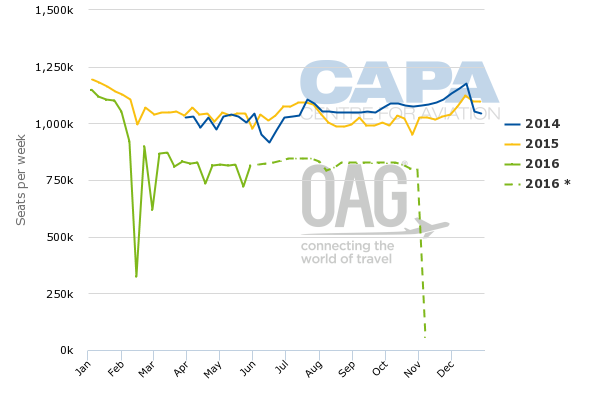 Gol works with other stakeholders to reduce commitments, including Delta

Gol has entered into other various agreements in 2016 to improve its finances. In Feb-2016 the company launched an advance ticket sales agreement with its frequent flyer provider Smiles (spun off in 2013)and structured tranches through Jun-2017. The first tranche of BRL376 million (USD104 million) was disbursed by Smiles in February 2016, and the remaining tranches are conditioned upon other additional cost savings and liquidity initiatives.

The airline is also holding discussions with local credit providers and bondholders to defer 90% of its principal payments from 2016 to 2019. Those concessions could reduce the company’s principal payments by BRL225 million (USD62 million) until 2018.

Delta Air Lines, which has made a strategic investment in Gol, with a 9.5% stake, has agreed to reduce the over-collaterialisation ratio of the USD300 million loan that it guaranteed for Gol in 2015. (Delta is a significant investor in Latin America, reportedly planning to increase its holding in Aeromexico to 49%, as well as considering bidding for a share in Avianca.)

Relief from various stakeholders is contingent on Gol's restructuring of bonds

The last  aspect of Gol’s efforts to restructure its finances, and one of the most vital, is the restructuring of unsecured bonds issued in international markets, totalling USD780 million.

The relief that Delta has pledged in its loan guarantee to Gol and the advance sales agreement with Smiles is contingent on the successful execution of the international bond restructuring. Additionally, Gol plans to use proceeds from the BRL550 million in relief from Boeing to fund the bond restructure.

In exchange for the unsecured bonds, the holders will receive new secured bonds with collateral covering more than 100% of the new commitments, in addition to a cash component and a new premium market value, said Gol. However, the news outlet Bloomberg has reported that bondholders overall would take a 30% to 70% haircut under the restructuring proposal.

Subsequently, the news outlet Reuters has reported that some of the bondholders had rejected the proposal, which Gol has described as a crucial part of its restructuring. As of 20-May-2016, valid shareholders had tendered USD124.6 million of the old notes.

Gol is taking the necessary steps to endure severe economic conditions in its home country of Brazil. But there is some uncertainty surrounding the most important element of its financial restructuring – the relief it is seeking from international bondholders. If Gol does not successfully conclude the restructuring of its bonds, then the conditional relief that it has secured from other stakeholders could begin to evaporate.

Even if Gol is successful in achieving all the different aspects of its restructuring, it faces a long road in whittling down its gross adjusted leverage ratio, which stood at 9.4x at the end of 1Q2016. Just as improvement in Brazil’s economic situation is not forecast for at least two years, Gol faces an uphill climb in improving its financial condition.