SriLankan Airlines to join oneworld, furthering its revival, and access to India for oneworld

National carrier SriLankan Airlines is betting that joining the oneworld alliance in 2013 will further its revival as the carrier continues to expand following the end of Sri Lanka's civil war in 2009, which has permitted increases in tourism and GDP growth. It is this focus on Sri Lanka the carrier hopes to build, having served a decade ago as a de facto hub for India given the liberal access regime whereas India was more protective elsewhere. India's opening of its skies to the UAE and Qatar, home to powerful networks, had tremendous impact on SriLankan's network. While the carrier will grow to India, it sees its growth firmly planted in Asia and is planning a service to Seoul.

While oneworld discreetly acknowledges SriLankan is not its typical member, SriLankan does bring oneworld greater access to India, where oneworld lost out to earlier in the year with Kingfisher's prospective membership being suspended. The competitive landscape also works against oneworld's positioning in India, with Jet Airways likely to join Star Alliance in the near future.

SriLankan's entry – announced at the IATA AGM in Beijing – will be sponsored by Cathay Pacific, whose CEO John Slosar acknowledged that while oneworld prides itself on quality, SriLankan, a carrier that does not jump to mind as large and prestigious, has a “growing reputation for customer service”. SriLankan's history includes a period where it was managed by Emirates, a relationship that ended tersely – although relations are now smoother – and left Emirates with a view to generally pursue expansion on its own. SriLankan's addition to oneworld will shift 0.4% of current seats in Asia Pacific.

Alignment of Asia Pacific capacity (seats) based on active and announced alliance members: 11-Jun-2012 to 17-Jun-2012

SriLankan serves 34 destinations in 22 countries around Asia, Europe and the Middle East but new cities it brings to the oneworld map are few, and internationally include the Indian cities of Kochi, Trivandrum, and Tiruchirappalli. SriLankan's potential strength – if more oneworld members serve Colombo – is its short-haul frequency from Colombo. While British Airways for example serves many Indian cities, these services are not relevant for oneworld's Asia-Pacific members as accessing them would require backtracking through London.

SriLankan's addition to oneworld will boost the alliance's share of international seats to/from the country by 2.7ppt.

Alignment of India capacity (international seats) based on active and announced alliance members: 11-Jun-2012 to 17-Jun-2012

Currently only two oneworld carriers serve Sri Lanka: Royal Jordanian from Amman and Cathay Pacific from Hong Kong via Bangkok and Singapore. Mr Slosar says that with SriLankan joining oneworld Cathay will likely introduce non-stop services to Colombo. It currently has a daily service to Colombo (four frequencies via Singapore and three via Bangkok). oneworld member elect Malaysia Airlines (MAS) also serves Colombo. SriLankan codeshares with MAS and has announced an agreement in-principle to codeshare with Royal Jordanian and S7 Airlines. SriLankan serves Moscow, S7's base, but not Amman, Royal Jordanian's base.

Prospective services from other oneworld members are very limited. British Airways already has an extensive network in India but in the long-term could look to serve Colombo for onward connections to Asia depending how SriLankan develops its network.

SriLankan to concentrate growth on Asia

SriLankan CEO Kapila Chandrasena tells CAPA that SriLankan's growth is firmly planted around Asia, and India in particular. The carrier operates 84 round-trip flights a week to India, almost entirely in the country's southern part given ethnic ties. SriLankan has 28 weekly flights to Chennai, making the route its largest by frequency after the Maldvies. SriLankan also operates 14 weekly flights to each of Kochi and Tiruchirapalli. In comparison, Delhi is served only daily, but Mr Chandrasena says SriLankan aims to bring the service to double daily. Mumbai, served daily, will remain as is in the near future. 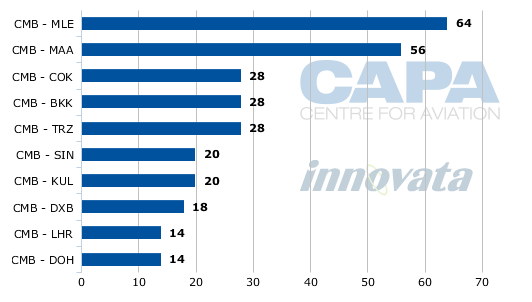 SriLankan's service to Seoul is expected by the end of 2012 and will be operated via Bangkok.

Africa may also be in the carrier's horizons. Africa-Asia traffic is projected by Airbus to have the highest growth rate over the next decade at 8.4%, even eclipsing the 7.5% growth within Asia Pacific. Mr Chandrasena says SriLankan is very closely watching the market and that there could be opportunities for SriLankan to make its Colombo base a hub for Africa-Asia traffic.

Average annual growth of traffic to, from and within Asia Pacific: 2011 to 2020

Colombo is on the axis between Africa and Asia, with a routing from Johannesburg to Beijing a mere 1.2% longer in distance if stopping through Colombo rather that serving the markets directly. Such a strategy is being pursued by Air Seychelles, who under management seconded from Etihad, will in Jan-2013 open a link to Beijing via its Mahe hub, which is almost exactly on the axis between southern Africa and Asia.

Greater Circle distances between Johannesburg and Beijing, non-stop and via Colombo

SriLankan in the past year had been evaluating returning to Australia – it had served Melbourne and Sydney – but is not confident service can be sustainable. While there is a large Sri Lankan contingent in Australia, traffic is largely VFR and highly seasonal. There is also competition through Southeast Asia and even the Middle East.

SriLankan is consolidating its European network in light of the economic downturn but aims to retain a presence via codeshares, which could along with oneworld membership, allow the consolidation to remain in place while SriLankan pursues more attractive growth in Asia.

Domestic expansion will also occur, with SriLankan over the year bringing its domestic network from 16 to 20 points, according to local reports. SriLankan will add the points of Ja Ela, Diyawanna Oya, Jaffna and Kayts.

While SriLankan is unprofitable, posting a USD173.2 million loss in 2011 compared to a USD54.7 million loss in 2010 (in 2011 operating costs increased 32%, ahead of revenue growth of 16.3%), the Government this year initiated a five year turnaround strategy that also includes adding by 2015 nine aircraft to the fleet of SriLankan and LCC Mihin Lanka. Additional widebodies are expected to be part of the growth.

SriLankan airlines operates a dual brand strategy, with the full-service carrier complemented by LCC Mihin Lanka, of which Mr Chandrasena is also CEO. Mihin operates to five cities – Dhaka, Dubai, Jakarta, Sharjah and Tiruchirappalli – with a fleet of one A320 and one A321. Mihin targets more price-sensitive markets and operates alongside SriLankan to Dubai and Tiruchirappalli, but Mr Chandrasena says Mihin will increasingly open new cities and not overlap with SriLankan. He expects to grow Mihin each year by about one aircraft, each of which will permit upwards of three new destinations being opened. Mr Chandrasena pointed to Mihin's success in the price-sensitive market of Jakarta as a model for future growth for the carrier.

SriLankan and oneworld are not obvious pair

oneworld is clearly the underdog in global alliances. It may prefer strength over numbers, as alliance CEO Bruce Ashby suggested when remarking "we take pride in the quality offering", but oneworld simply needs to expand to remain relevant. It is time for the alliance to add smaller members, and SriLankan is a start. The market remains heavily focused on leisure traffic, with tourism increasing 30% in 2011 year-over-year. This traffic, of course, is susceptible to Asia's prolific and growing LCCs. Sri Lanka's 8.3% GDP growth in 2011 may help boost corporate potential. oneworld membership will help SriLankan bring its services – both passenger-facing and back-end – to a global standard, which brings efficiency. SriLankan has shown its own initiative, having outfitted its widebody fleet with AVIO Interiors' lie-flat seats in business class and cabin-wide RAVE in-flight entertainment.

SriLankan will need to be ambitious in pursuing synergies, although they may be small given oneworld's small presence, and the preference of its members to be loosely affiliated to each other. Incremental revenue gain may be small – oneworld's total in 2011 was USD2.7 billion – but notable for SriLankan. SriLankan's membership marks a new chapter for oneworld tapping smaller airlines. Sri Lanka's growth, which SriLankan expects to ride on, should give oneworld confidence that smaller airlines are valuable, and needed.