SpiceJet has the ink on the paper. USD100 million in fresh investment will be available to the Indian LCC, thanks to US distress fund, WL Ross & Co, and Goldman Sachs Group. Billionaire, Wilbur Ross Jr, Chairman of WL Ross & Co stated the financing is intended to "give SpiceJet the staying power to get through the industry consolidation that is under way". That SpiceJet has retained its independence (after rumours of a potential buy-in by UB Group) however means further consolidation (of ownership) in India is really no closer.

But "consolidation" of capacity is finally occurring, as reality has started to hit home in India. The alarming recent results of listed carriers SpiceJet and Jet Airways have shown just how difficult the airline market in India has become. For example, the break-even load factor of Jet Airways' ‘value-based' unit, JetLite, hit 111% in the first quarter of 2008/09 (to Jun-08).

Even one large aircraft manufacturer has called for capacity restraint. That message is now apparently getting through. In late Jul-08, the lead salesman at Airbus, John Leahy, took the remarkable step of urging Indian airlines to defer deliveries to avoid excess capacity that could undermine the future of the market. In an interview with the Wall Street Journal, Mr Leahy stated, "India has a great need for air travel, but now there's too much capacity".

Ministry of Civil Aviation data shows airlines have reduced their weekly domestic services from 10,922 in Mar-08 to around 8,778 in Jul-08. This represents a year-on-year decline of 10.5% based on Airports Authority of India data. Ministry officials stated the number of flights offered in Jul-08 is at the lowest level since 2005.

The July to September quarter, encompassing the Monsoon season, is traditionally the weakest for Indian carriers, but the market has been slowing since late 2007. Jet Airways is cutting domestic capacity by 12% during the quarter, while Air India has cut its domestic operation by around 10%. Some of the smaller players, like GoAir, have cut back even further with several base closures. But others, including Indigo, Paramount and SpiceJet, continue to aggressively expand. 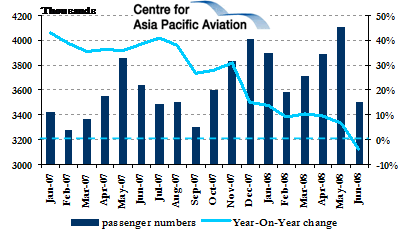 India's aviation industry is in a very difficult phase and the bad news is likely to outweigh the good for several more quarters. Overall, the domestic market is likely to experience traffic reductions in the current quarter, followed by slow growth in late 2008 and 2009.

For some carriers holding out for white knight investors, a further 12 months of deep losses may be too much to bear. Further capacity cuts will flow from the weaker airlines, while those with deeper pockets will be aiming to consolidate their positions and cashed-up players, like newly recapitalised SpiceJet, will be looking to grow aggressively through the adversity