The majority of American carriers’ shares rose on Monday (03-Aug-09), as the Dow (+1.3%) rose on the back of improved purchasing managers’ indexes in China, the UK, and the EU. However, oil prices (3.1%) surged during the day, rising to USD71.58 in New York, tempering some of the airline gains.

Southwest (+6.5%) was the biggest mover yesterday, continuing its rise after announcing plans to bid for Frontier Airlines. Frontier’s other bidder, Republic Airways (+4.5%) also gained as the carrier completed its acquisition of Midwest Airlines. Expressjet rose +5.8%.

Continental's (+2.9%) improved again, following Fitch Ratings' affirmation of a stable outlook and a “B-” rating. Subsequent to the market close, the carrier announced passenger traffic fell 3.3% year-on-year in Jul-2009, while RASM was still down heavily.

American Airlines (-0.8%) shares fell as a result of Fitch Ratings affirming a rating of “CCC” for the carrier the day prior.  However, results may be different on 04-Aug-09, following the carrier’s announcement it closed a USD276 million private placement offering of senior secured notes due 2016, which were priced at par to yield 13%. The purpose of the offering was to refinance, in part, the outstanding USD401 million principal amount of the Company's 1999-1 enhanced equipment trust certificates (1999 EETCs), which are scheduled to be paid in full on 15-Oct-09.

Meanwhile, FTN Capital Markets lowered its full year outlook for Delta Air Lines (+0.7%), forecasting it will lose USD0.97 a share as a result of decreasing yields. The carrier’s revenue erosion is expected to bottom out in 3Q2009.

Meanwhile, US Airways (-6.5%) suffered the largest fall of the day, after falling 3.6% the previous trading day. 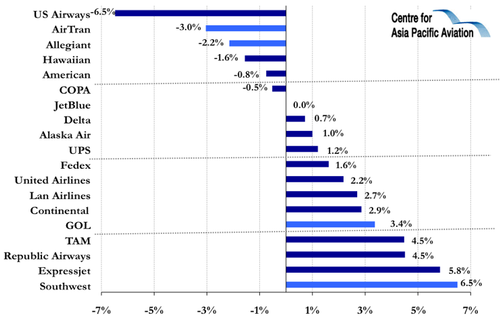