Southwest Airlines: solid financial performance for FY2013, but challenges are piling up

Similar to most of its US carrier peers, Southwest Airlines recorded a strong financial performance for 4Q2013 and FY2013, reflected in its increase in profitability. The carrier heads into 2014 with a positive outlook for the US economy and is encouraged by the continued stability in fuel prices.

But 2014 is also a pivotal year for Southwest as it completes its integration with AirTran, which is pressuring the carrier’s unit cost for the year. Southwest also remains locked in contract negotiations with its five largest unions that represent nearly 99% of its workforce. The prolonged negotiations are taking a toll as some unions – seeking a share in the profitability – express their displeasure in what they deem as souring employee relations.

In a much broader sense, Southwest’s business model is increasingly harder to define in a US market place that is evolving to three large network carriers, hybrid airlines and no-frills ultra low-cost carriers. Southwest does not fall into any of those categories; and while it publicly declares that to be a benefit, the reality is its once-competitive advantages may be dimming in the new realities of the US market place. 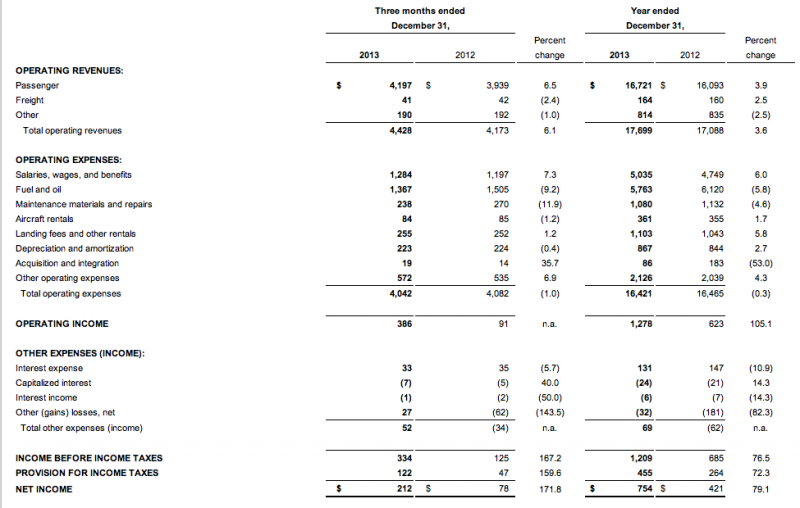 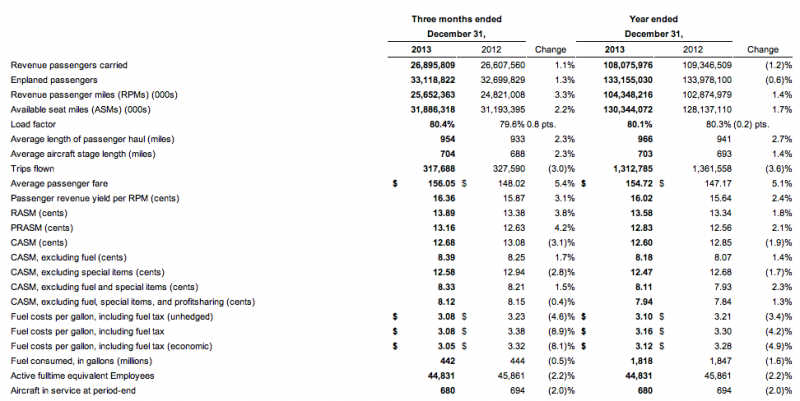 But those favourable unit cost gains are eroding in 1Q2014 when the carrier’s unit costs are expected to rise 4% and between 2% and 3% for the full FY2014. Both Delta and United also estimate a roughly 2% rise in unit costs excluding fuel for FY2014. Additionally, Southwest’s estimates for its unit cost creep in FY2014 do not include any projections from possible labour deals reached during the year.

Carrier CEO Gary Kelly recently explained to investors that most of the cost pressure Southwest expects to experience during FY2014 is attributable to the AirTran integration. The continuing transition of 88 Boeing 717s to Delta Air Lines, and the physical conversion of AirTran’s 737s to the Southwest configuration and livery is resulting in an additional 10 to 15 additional aircraft out of service going forward until Southwest finishes the AirTran integration.

“That is pretty inefficient...there’s a hangover for that,” Mr Kelly observed. He also cited substantial training costs for flight crews as well as having a higher number of workers not in service due to a higher number of aircraft undergoing modifications.

“We're seeing some inflation that we’re trying to combat,” Mr Kelly stated. “But I think most of cost pressures that we’re seeing here in 2014 are attributable to the integration.

Southwest’s ultimate goal in its labour negotiations is to strike contract accords that do not create unit cost pressure, while preserving salaries. It is a tall order as Southwest now has one of the highest pay structures in the US industry. During both 4Q2013 and FY2013, labour costs accounted for roughly 31% of the carrier’s total top-line expenses, compared to 29% to FY2012.

The carrier acknowledges that its labour agreements are built on the operating model Southwest executed 10 to 15 years ago. But COO Michael Van de Ven noted that, “there are real avenues in that where I think we can find flexibility that we can improve operating performance and improve our costs, and come to labour contracts with our labour groups that do not put unit cost pressure on the company”.

Meeting that goal, however, could prove challenging.

The Dallas Morning News recently reported that the Transport Workers Union filed a lawsuit challenging Southwest’s request that ramp workers at Chicago Midway prove they were sick earlier in Jan-2014 during a winter storm. According to the paper, Southwest cited operational challenges and inadequate staffing as factors causing service disruptions at Midway, one of its largest airports measured in daily departures. Citing court documents, the Dallas Morning News quoted Southwest explaining it felt there was a coordinated job action in retaliation for slow progress in contract talks.

Southwest’s stated goals in collective bargaining negotiations and the recent behaviour by ramp workers suggests that the two sides have a long road ahead in reaching cost neutral contracts that improve productivity without labour groups feeling as if they are having to make sacrifices or concessions.

The implications of the alleged work action in Chicago illustrate definite cracks in Southwest’s historically favourable labour relations, and follow a declaration from TWU in Mar-2013 in which the union warned: “By refusing to reward employees for their contribution to our airline's success, management is taking a terrible wrong turn from Southwest Airlines’ past emphasis on putting employees first and maintaining positive labor relations,” the union stated.

Those events show Southwest management will have its work cut out with respect to convincing employee groups of the dire need to preserve its shrinking cost gap with US network carriers.

Labour issues are not the only long-term challenge Southwest faces in evolving its business. The crop of established and wanna-be ultra low-cost carriers (ULCCs) are creating a new level of pressure for Southwest, which does not neatly fit into the hybrid low-cost model. Most hybrid airlines either have an extra legroom offering or a dedicated business class. Southwest has no immediate plans to offer either amenity, even as most passengers are willing to accept a certain price point for extra comfort.

Mr Kelly dismissed any thoughts of Southwest experiencing an identity crisis. However, as in the past he worried that it is uncertain if the cost gap between Southwest and legacy carriers will widen, after shrinking over the last decade.

In terms of costs, Southwest’s CEO believes the carrier “is not significantly higher than they [ultra low-cost carriers] are, and certainly have a much wider cost advantage relative to the legacy carriers in Southwest than the ultra low cost carriers have as compared to Southwest”.

Delta and United’s ex-fuel costs for FY2013 were USD9 cents and roughly USD9.5 cents respectively. At approximately USD8 cents, Southwest seems a bit closer to the legacies than the ULCCs, and with its projected rise for FY2014, it is plausible Southwest's costs gap with ultra low-cost carriers will widen. Delta and United’s USD38 billion and USD39 billion in FY2013 revenues were also more than double the USD18 billion recorded by Southwest, which allows the larger carriers a certain level of scale to absorb higher costs.

Mr Kelly assured that Southwest has not “hit our stride yet on cost, so the fleet modernisation [reconfiguring 737-700s and taking delivery of larger-gauge -800s] is paying huge dividends on the costs. And we have this, as everybody understands, we’ve got a lot of inefficiencies baked in right now because of this integration that’ll be behind us once we clear 2014”.

Labour and identity are challenges Southwest faces over the long term

It is probable Southwest won’t clear its labour hurdles during 2014, which remain a huge variable in the carrier’s ability to keep its costs in check. While it continues to express optimism that favourable contracts for both sides can be negotiated, the reality is Southwest has a long road ahead in meeting its stated goals in the latest round of talks.

Southwest’s business strategy over the long term also still remains an unclear. While its brand certainly still engenders an impressive customer loyalty, its positioning in the US market place during the next couple of decades is tough to predict.

While it believes it can remain a low-fare leader, the reality is Southwest runs the real risk of not having a passenger base to identify with as ULCCs aggressively target price-sensitive travellers, while legacies and hybrids devise strategies to compete fiercely for higher-yielding corporate customers. At some point it might be wise for Southwest to consider those realities and evolve its business accordingly.