However, adjusted profit came in at USD0.12 per share due to a gain related to future fuel-related derivative assets. Analysts had expected the carrier to report a profit of USD0.17 per share, according to Thomson Reuters.

Elsewhere, Latin American carriers including GOL (-1.1%), LAN Airlines (-0.9%) and TAM (-0.6%) were all down at the end of trading, as wider markets declined. Markets were down as investors expressed uncertainty ahead of the G-20 meeting. As a result, Brazil’s Bovespa (-0.2%) slipped for the day, while Chile’s IPSA (+0.1%) made a marginal gain. Copa Airlines (+1.3%) was the only carrier from the region to rise for the session. 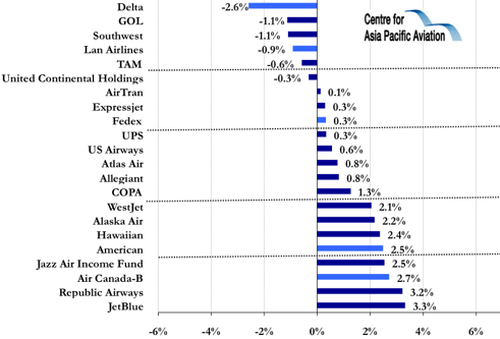