Japan’s ambitious Skymark Airlines announced a strong performance in its financial highlights for the nine months to 31-Dec-2010. However, the airline has been forced to make a minor cut to its outlook for its full-year net result, due to additional tax payments.

For the nine months, Skymark boosted operating revenue by 34.5% year-on-year to USD496.6 million, thanks stronger traffic on its network of 12 domestic destinations and aggressive expansion. Operating profit more than doubled to USD104.7 million. Net profit was up 117.8% to USD47.6 million.

The carrier, the largest LCC in Japan, is seeing clear benefits from the troubled state of Japan Airlines and the slow return to growth in the domestic market. After three years of slumping traffic, Japanese domestic passenger growth edged tentatively into positive territory at the beginning of FY2010/11. However, the Japanese market remains dominated by the two major players, All Nippon Airways and Japan Airlines, and the travel market is fragile and susceptible to local shocks. 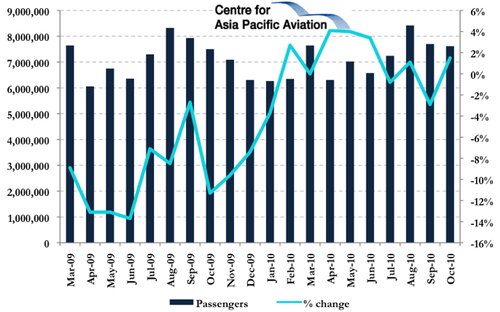 Japanese airlines continue to be very cautious about their capacity expansion. JAL and to a lesser extent ANA have embarked on detailed reworkings of their domestic networks. The airlines have moved to cut capacity to many secondary airports and reshuffle aircraft to better accommodate capacity requirements, allowing smaller carriers such as Skymark more room to manoeuvre on secondary routes. 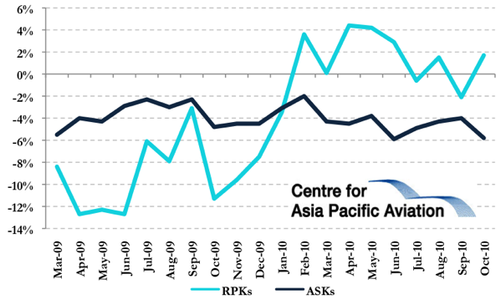 Having inducted five new B737-800s to its fleet over the past nine moths, Skymark added significant capacity over 2010, as have other Japanese LCCs and regional carrier. This has not been remotely enough to compensate for the pullbacks by the two large airlines. Over the first 10 months of 2010, capacity (ASKs) in the Japanese domestic market was cut by 4.3%, while domestic traffic (RPKs) recovered by a meagre 1.3%. Overall domestic capacity is down more than 9% since 2006.

Domestic passenger load factors, typically averaging under 65% in the domestic market, have firmed significantly since mid-2010, as airlines have adjusted capacity to more realistically reflect the domestic market. Skymark Airlines has reported much improved load factors in recent months, topping 77% system-wide in some months over 2H2010 and significantly outperforming its domestic rivals on most of the trunk routes. 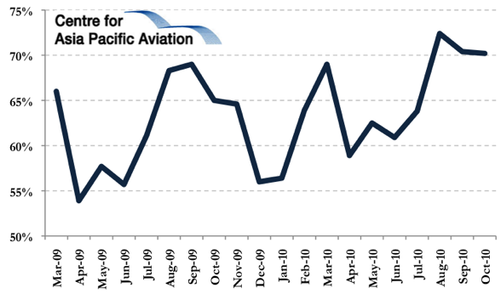 The carrier reported average load factors of 76% across its network over the first half of its fiscal year, well above the domestic average of 65.5% in the same period. In Dec-2010, the carrier’s average load-factor on its three times daily Tokyo Haneda-Kumamoto service was between eight and 13 percentage points better than its rivals on the route: ANA, JAL and Skynet Asia.

In Oct-2011, Skymark more than doubled its net-profit forecast for the 12 months ending 31-Mar-2011, raising it from USD30.8 million to USD67.8 million. More recently, Skymark released a downgraded profit forecast for FY2011, but stated it still expects to achieve an operating profit the year, on the back of steady increases in revenue.

The carrier cut its parent-only financial forecast for the full-year to USD61.7 million, due to an expected increase in tax expenses.

As the carrier expands its fleet it is looking at the opportunities offered by international expansion. In FY2011, the carrier plans to take delivery of a further seven aircraft, adding to its fleet of 18 B737-800s. Skymark plans to build its narrowbody fleet to 40-50 aircraft by 2015.

Domestic expansion to eventually give way to international foray

Skymark’s largest airport is Tokyo Haneda, as Tokyo dominates all Japanese airline operations, but it has increasingly made Kobe a major hub. However, the carrier also has a strong presence at smaller airports such as Fukuoka, Nagasai, Ibaraki and Kagoshima. 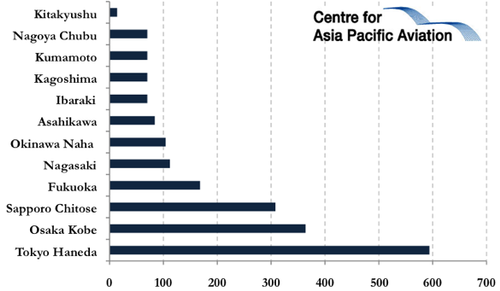 Over the next few years, Skymark intends to continue its network extension, particularly from smaller regional destinations such as Kobe and Ibaraki. The carrier also intends to operate from the new Ishigaki airport in Okinawa when it completes construction. The airline recently announced plans to launch Kobe-Tokyo Narita and Naha-Miyako services and increase Kobe-Shin Chitose-Ibaraki capacity early in FY2011. 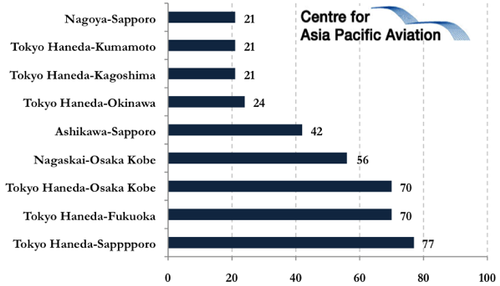 The carrier’s domestic network is also set to benefit from a relaxation of the codesharing rules for FY2011. In Jan-2011, the MLIT announced that from 01-Mat-2011 it will ease the ratio of the seat sales limitation for JAL and ANA on codeshare services with Japan’s  four "newcomer" airlines – Skymark and its fellow LCCs AirDo, Skynet Asia and Star Flyer.

The limit on the number of seats sold through codeshares on designated local routes will be raised from 25% to 50%, for up to six daily frequencies for each airline. The ratio for trunk route flights will remain at 25%. The MLIT has endorsed the relaxation of codeshare rules as a method to promote new services and traffic on smaller domestic routes by Japan’s secondary carriers.

Skymark is looking at Taiwan for its maiden international route with its B737s, but the carrier has much more ambitious plans

Sitting at the back of the carrier’s fleet and route expansion plans is the carrier’s MoU with Airbus for four A380s and two options and its ambitious international expansion plans. In Dec-2009, Skymark became the first LCC to announce it planned to purchase the A380, although Air Austral has already announced it plans to operate an 800-seat, all economy configuration of the aircraft. A firm order with Airbus is expected as early as 1Q2011, and the airline hopes to commence deliveries from 2014.

Since the initial MoU announcement, the carrier has made it clear that it plans not only to become the first LCC to operate the aircraft, but also one of the largest operators of the type. In Dec-2010, Skymark Airlines President Shinichi Nishikubo stated that the carrier eventually plans to add up to 15 A380s to its fleet, operating the aircraft to destinations in the US, Australia, Europe and Asia.

The carrier’s ambitious plans will need not only a stronger domestic market, but a much better international tourism market for Japan. If things do go to plan and Skymark’s ambitions come to fruition, Japan will finally see the rise of a strong LCC player in the airline market.