Singapore Airlines (SIA) faces a bleak outlook for its fiscal second half as fuel prices remain high and yields are at risk of dropping further due to the challenging economic conditions Europe. SIA mainline yields dropped 1% in the quarter ending 30-Sep-2011 (2QFY2011/12) despite the increase in fuel prices, suggesting passenger yields have peaked in the current cycle some 9% below pre-GFC levels in 2QFY2008/09.

In speaking to analysts during the group's 2QFY2011/12 earnings briefing, SIA CEO Goh Choon Phong warned the market conditions currently facing the carrier are in some respects more challenging than FY2008/09. “I think we are looking at a much more protracted type of economic issues now in Europe where we actually do not see any finality at least in how it’s going to go. So it is a protracted situation ... we might have to bear with it for perhaps a longer time than the last one,” Mr Goh said.

Mr Goh believes the previous downturn was much different than the current economic situation because the earlier downturn was precipitated by the US and was a short-term crisis, unlike the current Europe-driven downturn which now threatens to turn into "a protracted situation". Mr Goh also points out that unlike the last global downturn in 2008, fuel prices have so far remained “stubbornly high” despite the weak economic conditions. “What we are not seeing today is that kind of reduction in cost that should accompany that kind of weak outlook,” he told analysts.

But Mr Goh wouldn’t go as far as predicting a repeat of the quarterly losses that the SIA Group saw in FY2008/09. “We’re certainly not aiming for one so you can be assured that we’re doing everything possible both to contain costs further and to be very flexible and nimble in the way we react to the market,” he says.

SIA needs to maintain flexibility as the outlook for 2012, while relatively gloomy, is also unusually uncertain with several unknowns. Mr Goh says while Europe’s 10% unemployment rate and its high borrowing costs are major concerns, the actual impact on demand is  still unknown. “Whether or not that will eventually lead to a major recession is still something that we do not know,” Mr Goh says.

SIA, however, is not encouraged by the recent economic indicators . After recording improvements earlier this year, Mr Goh points out the purchasing manager’s index reversed in September. As a result, purchasing managers are now expecting to buy less than before. “That’s a concern. It does mean that freight movement trade will slow down and of course the forward bookings are actually showing signs of weakness,” he says.

The quarter-over-quarter drop is discouraging as it represented the first drop after five quarters of recovery. The yield trend will likely continue down as conditions in the key European market become even weaker. 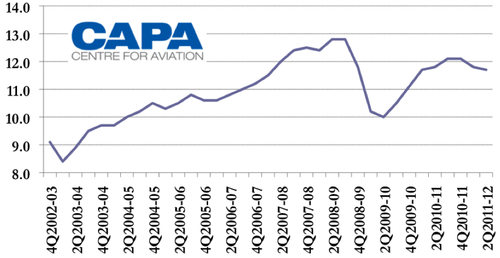 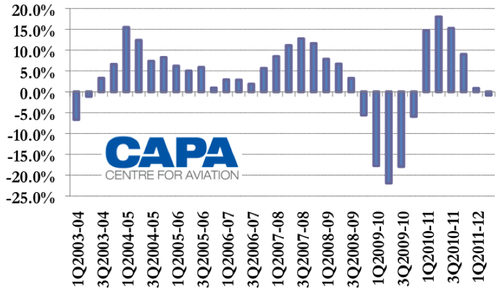 SIA executives, however, downplay the recent slip in yield, explaining it was largely a result of lower local currency yields. “In Europe the currency has been weak and that has also dampened yields when translated back to Singapore dollars,” SIA commercial executive vice president Mr Mak Swee Wah told analysts.

Senior vice president finance Chan Hon Chew explained that lower currency contributed about -1.4 points, which was partially offset by improvement in the passenger mix. “It’s encouraging that even in these difficult times our passenger mix has still improved. In other words, our business class traffic is still quite healthy,” Mr Chan says.

Mr Mak added that the premium segment is “an important part of our business and something which we watch very carefully especially when circumstances are very uncertain. We are sparing no effort to make sure that we keep this segment of the market. Our people are actively knocking on doors on all the corporates that we have. We are signing up more, but we have to remain competitive as well. So certainly this is one segment of market that we are working doubly hard to make sure that we retain our good share.”

The SIA Group is also worried about the freight market. SIA cargo yields are some 20% below pre-GFC peaks and the outlook is anything but clear.

In response to the weak demand, SIA has already adjusted its cargo capacity projections for FY2011/12 and is now planning to add 7% capacity for the full year compared to earlier plans for 9% growth. SIA’s cargo capacity was up only 2% in 1HFY2011/12 but SIA executive vice president operations Ng Chin Hwee points out that SIA Cargo typically “mounts more capacity during the year end to cater for the peaks”.

For now SIA does not see a need to further adjust cargo capacity despite the recent gloomy economic indicators. “I don’t think we are at the stage where we are pressing the panic button, that’s for sure,” Mr Ng says.

He adds while most cargo carriers like SIA have toned down capacity plans they are still planning to grow capacity for the upcoming peak season. “Apart from being flexible in operations among the key trade routes, we also are deploying where we can find new growth potential. For this half year for example, we have actually mounted additional capacity into Africa where we see some growth potential out there,” Mr Ng says.

Cargo yields have fallen in each of the past three quarters. The most recent fall was not as bad as the first quarter decline and comes off strong growth the previous year, thanks to the post-GFC inventory restocking boom. 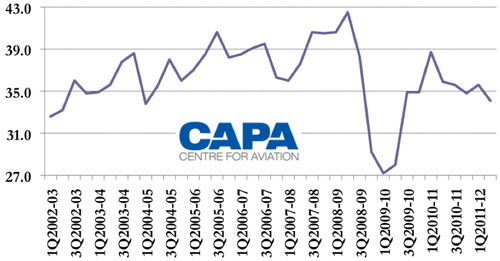 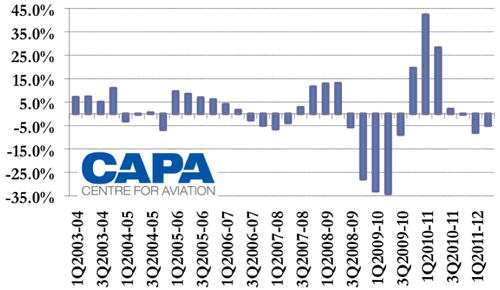 In its 2QFY2011/12 earnings announcement last week, SIA said the prevailing economic uncertainty and weak consumer confidence are “impacting demand for air transportation”, noting that advance passenger bookings are “showing signs of weakness”, particularly in Europe and the US. Exacerbating the impact of the weak outlook, SIA noted, is the continued high cost of fuel.

The situation is exacerbated by the expected increases in capacity, particularly in the challenging Europe-Asia market, as airlines continue to take delivery of widebody aircraft. Mr Mak told analysts that “particularly in Europe and to a certain extent also US now, competition is very fierce. So under such circumstances there’s pressure on the fares and therefore the yields.”

So far no airlines have adjusted capacity in a meaningful way. SIA, however, is monitoring the demand situation closely and is always willing to make adjustments if necessary. “We always have some flexibility in the way we manage our aircraft numbers as well,” Mr Goh says. “There are some of our aircraft on leases and there are leases that could actually be extended or not and so on, so we do have some flexibility in adjusting capacity from year to year and we will exercise it as I mentioned earlier in a nimble and flexible manner.”

SIA’s fleet is reducing in size over the fiscal second half from 106 aircraft as of Sep-30-2011 to 101 aircraft as of Mar-31-2012. But capacity is actually being added as three A380s are being delivered and the aircraft returns that are planned will not occur until the end of the fiscal year.

If today’s oil prices continue, or rise, SIA – in its current form – is a marginal business at best. Something has to change.

See related report: Scoot represents a radical change of pace for SIA but the new long-haul LCC is no pioneer

SIA’s parent airline company (ie mainline operation) turned an operating profit of SGD89 million (USD113 million), marking an improvement over the fiscal first quarter, when it posted an operating loss. Regional subsidiary SilkAir, which has been outperforming SIA mainline over the last several months in terms of profit margin, remained profitable while SIA Cargo was in the red.

Mr Chan told analysts the improvement at the parent airline was driven by load factor improvements during the northern hemisphere summer peak season and a partial recovery in Japan, where demand plummeted earlier in the year following the Mar-2011 earthquake. But while SIA's passenger load factor was up compared to the fiscal first quarter, it was down by 1ppt compared to the fiscal second quarter last year.

All regions recorded flat or lower load factors except Southeast Asia, where demand has remained strong despite the challenging global economic conditions. Europe and the Americas had the biggest drop in load factors.

While SIA’s mainline load factor is again above break-even Mr Chan warns “the margin is razor thin and given the stubbornly high fuel prices and also the weak economic outlook, the remaining six months will be very challenging”. 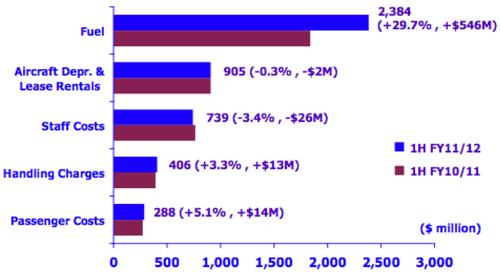 For the fiscal first half, SIA Group made a net profit of SGD239 million (USD302 million). This was 62% lower than the same period a year ago, principally on account of high fuel costs. Operating profit declined to SGD134 million (USD170 million), down 78%. The operating results of the main companies in the Group for the first half of the financial year are as follows: 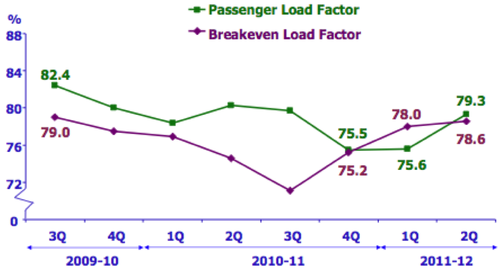