The total number of premium economy seats on the SIA fleet will increase by more than 40% over the next six months, driven primarily by the delivery of seven A350-900ULRs. The A350-900ULRs will feature an unprecedentedly large premium economy cabin with 94 seats and will be used exclusively on nonstop routes to North America.

The surge in premium economy bookings since 2015 is an indication that SIA’s premium economy product has been well received by the corporate market. SIA introduced premium economy in Aug-2015 and has since gradually incorporated the product across its long haul fleet, which is also used on some regional routes.

Note: the 3 777-300ERs without premium economy will be retrofitted over the next few months.
Source: CAPA Fleet Database.

SIA seems to have been successful at avoiding business class cannibalisation. Business class accounted for the same proportion of business bookings in Singapore in 2015 and 2017 – slightly less than 38%. In fact, the proportion of economy bookings declined from more than 60% in 2015 to slightly above 54% in 2017, according to the CWT and Travelport study. 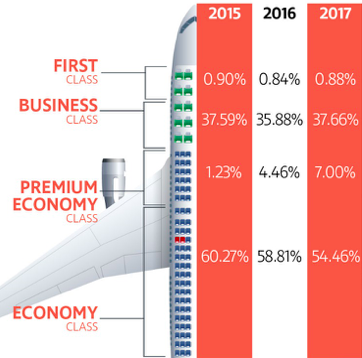 The CWT and Travelport study, which was conducted by analysing over 1.3 million Singapore point of origin bookings over the three-year period, concluded that “premium economy is the fastest growing cabin segment for business travelers in Singapore”. This is hardly a surprise, given that premium economy was previously only available on a limited number of routes from Singapore. However, the data shows that Singapore’s corporate sector has embraced premium economy as availability has increased.

“One can easily see the appeal that premium economy has for corporate travel programs”, CWT Solutions Group Asia Pacific Director Richard Johnson stated in a 19-Jun-2018 press release. “It gives travelers that much-needed extra comfort versus economy class on medium-to-long haul flights, while costing their companies significantly less than a business class ticket."

“It’s interesting that the increase in premium economy bookings seems to have come largely at the expense of economy class, and not business class”, added Mr Johnson. “This makes sense, given the trend we’re seeing where companies are looking beyond travel costs and paying more attention to traveler comfort and productivity.”

Prior to Aug-2015, premium economy was only available in Singapore from a relatively limited pool of foreign airlines.

Qantas resumed Singapore-London flights in Mar-2018 after a five-year hiatus, using four-class A380s. At the same time, Qantas reintroduced the A380 on Sydney-Singapore and Melbourne-Singapore, replacing two-class A330s that are not fitted with premium economy. Lufthansa launched Singapore-Munich in Mar-2018 using A350s with premium economy, supplementing its long-standing A380 service on the Singapore-Frankfurt route.

SIA has over 30 premium economy routes from Singapore

However, SIA has been by far the biggest driver of premium economy growth in the Singapore market. SIA currently has over 30 routes from Singapore with premium economy while foreign airlines offer only 15 routes, nearly all of which are also served by SIA.

SIA has introduced premium on all routes over 11 hours. Christchurch and Istanbul are the only remaining SIA routes over eight hours that do not yet have premium economy.

SIA has unveiled plans to introduce premium economy on the Singapore-Christchurch route in Jan-2019 as A350s replace 777-200ERs. Istanbul will also have to be upgraded within the next year or two, assuming the route is maintained, because SIA is phasing out its 777-200ER fleet. After the upcoming completion of 777-300ER retrofits, the 777-200ER will be the only long haul aircraft in the SIA fleet without a premium economy cabin.

SIA also currently offers a premium economy product on 15 routes of less than eight hours. However, on most of these routes premium economy is only available on some flights.

SIA began the current fiscal year on 1-Apr-2018 with 58% of its fleet fitted with premium economy (62 of 107 aircraft). In the current quarter the airline has put six aircraft into service, including five 787-10s (which do not have premium economy) and one A380.

SIA had retrofitted all 19 of its original A380s by mid-2016, including five aircraft that are no longer in service. These five aircraft are being replaced by five new A380s; four of these aircraft have already been delivered (including one which was delivered earlier this month), and the last aircraft will be delivered later this year.

The 777-300ER retrofit programme has taken much longer, and will finally be completed later this year. SIA has been installing 28 premium economy seats on its 777-300ERs while increasing the business class cabin and reducing the first class and economy cabins.

Premium economy capacity to increase significantly as A350-900ULRs are delivered

As CAPA highlighted in a May-2018 analysis report, SIA has selected a low density all premium configuration for its A350-900ULRs, with 94 premium economy seats and 67 business class seats. These aircraft will be used exclusively for ultra long haul nonstop flights from Singapore to the US.

Premium economy currently accounts for approximately 6% of the more than 30,000 total seats in SIA’s current active fleet. The proportion of premium economy seats will increase to 8% by the end of 2018, due mainly to the delivery of the A350-900ULRs.

However, premium economy has a disproportionately large significance for SIA strategically and is now generating meaningful revenue. The roll-out of premium economy has significantly improved SIA’s position in the corporate market. This position will improve further as SIA resumes long haul expansion with the premium focused A350-900ULR.