Analysts at JP Morgan expect the carrier to report a 7.5% year-on-year fall in consolidated RASM for the month, compared to a fall of 14% to 15% in Oct-2009, which should result in further improvements in the carrier’s stock price. According to the analysts, legacy carriers have seen stocks fall approximately 15% relative to their pre-earnings positions for Oct-2009. United Airlines (+6.4%) stocks have fallen 2% for the period, while American Airlines (+4.1%) stocks have fallen 26%. US carrier stocks have lost almost 30% in 2009, but are currently above their all-time low in Mar-2009.

Air Canada (0.0%) responded to what it stated was misleading and false allegations by the Canadian Federal Pilots Association, a union representing Transport Canada's aviation inspectors.

The Canadian Federal Pilots Association alleged flight AC271, operating Winnipeg-Toronto service on 09-October-2009, departed Grand Forks with ice on its wings. However, according to Air Canada, the flight only departed after a visual inspection of the wings by flight crew, in accordance with Transport Canada regulations, determined there was no ice on the wings.

The Canadian Federal Pilots Association also alleged safety was compromised during the refuelling process at Grand Forks. The carrier responded stating that due to the unavailability of ground power at the diversion airport, Air Canada's flight crew, in consultation with flight dispatchers, elected to refuel the aircraft with the passengers onboard and one engine running. While Air Canada is not certified by the regulator for this procedure, the aircraft manufacturer's specifications allow fuelling with the engines running.

LAN Airlines (+3.3%) reportedly plans to list of the Lima Stock Exchange, as part of Peru, Chile and Colombia’s plans to facilitate cross-border stock trading. The stock exchanges plan to integrate operations by the end of 2010. The carrier’s shares have gained 42% this year on the Chilean stock exchange, compared to a 40% increase in the Ispa.

ExpressJet (-1.1%) was meanwhile the only carrier to be down at the end of trading, after CEO, James Ream, stepped down from his position to become Senior Vice President for Maintenance and Engineering, effective 01-Jan-2010. 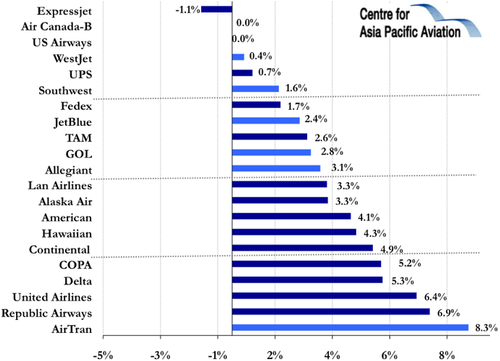