SAS Group delivered an unexpectedly strong result second-quarter result, reporting net income of EUR60 million which saw the group finish the first half in the black, in sharp contrast to some of its full-service rivals to the south. The result is a significant turnaround for SAS and is even more remarkable in light of the various challenges faced by European airlines. Its profitability may finally make it an attractive acquisition or merger partner.

SAS Group, the largest airline company in Scandinavia, surged back into net profitability in the second quarter, seasonally its strongest, with the once-struggling airline finishing the first half in the black for the first time since 2007. Surging passenger numbers, strengthening yields and a sharp reduction in operating costs bolstered the second quarter performance. CEO Rickard Gustafson described the result as the group’s “best since 2008”. It had recorded losses in all but two of the 16 previous quarters. The result signals a major turnaround the airline, which has been implementing ambitious cost reduction and restructuring efforts following years of heavy losses. SAS’s return to profitability is even more impressive in light of the spiralling fuel costs, sluggish economic growth across much of Europe and the Middle East/North Africa crisis, which saw its larger rivals Air France-KLM and Lufthansa Group report heavy losses.

"In recent months we have achieved record levels for the load factor, noted increased customer satisfaction and we are once again Europe’s most punctual airline, despite continued intense competition," Mr Gustafson said in his update, his second since becoming CEO on 01-Feb-2011. "This result provides us with a platform from which to proceed with our work; a step on the way but far from enough." The CEO stated the strong result "is evidence of our stable position and that we are strong in delivering even under demanding conditions." 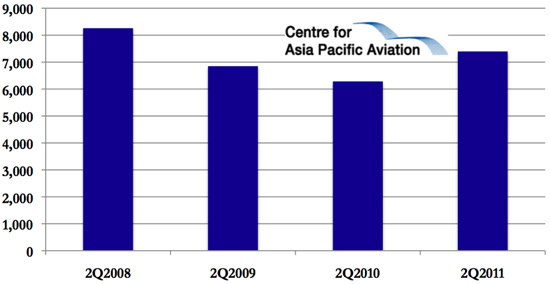 SAS said that it enjoyed a strong increase in both business and leisure passengers in the period, in addition to the ongoing economic recovery across key markets, providing an improved pricing environment in the quarter. Group ASKs increased 12.3% and RPKs increased 13.3%, boosting load factors 0.7ppt to 76.1%. Yields at the key Scandinavian Airlines unit increased 0.6%, with unit revenue (RASK) up 6.6%. Yield weakness, however, continued at Wideroe, its Norwegian unit, and Blue1, its Finnish unit. Respective yields fell 2.2% and 0.9% in 2Q.

In Finland, Blue1’s competitive position deteriorated in 2Q, with the airline recording a pre-tax loss of SEK130 million (EUR14 million), down from last year’s SEK43 million (EUR5 million) loss. Revenue increased 2.8% to SEK442 million (EUR48 million). The heavier loss was due to higher fuel costs and increased competition, which further squeezed margins. Yields were down across all sectors, SAS Group noted. As a result of ongoing losses, Blue1 in Jun-2011 introduced significant capacity cuts and a plan for further cost reductions and yield gains. Headcount will be reduced, the airline’s fleet will be streamlined and most of the European routes will close in the second half.

SAS Group demonstrated prudent management of capacity in the period, with load factors up across the most key regions. RPKs increased in double-digit figure in Europe, Intra-Scandinavia, domestic Norway and domestic Sweden. Loads fell on intercontinental routes as growth outpaced demand, and RPKs on domestic Danish routes fell 3.1%.

SAS Group’s strong performance was also driven by the airline's continued focus on cost reductions. The "Core SAS" cost reduction programme was launched in Feb-2009, amid the economic downturn across Europe and LCCs moving into the Scandinavian market, exposing SAS’ relative inefficiency, forcing SAS to take a knife to its cost base. The programme aimed to take SEK7.8 billion (EUR853 million) out of the group’s cost base, of which 97%, or SEK7.6 billion (EUR831 million), has been achieved. The remaining sum will be passed through in 3Q. Core SAS contributed to an SEK200 million (EUR22 million) reduction in operating costs in 2Q2011, which were attributable mainly to reduced employee headcount, more efficient process on the ground and in the air and ongoing cost awareness across the group, the airline says. The group estimates SEK6.9 billion (EUR755 million) has been taken out of the ex-fuel cost base under the plan. 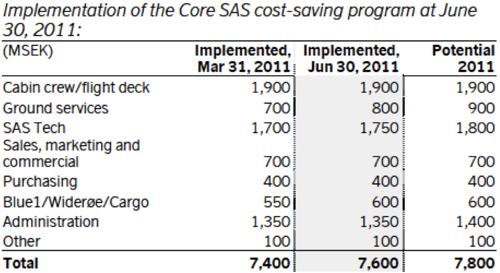 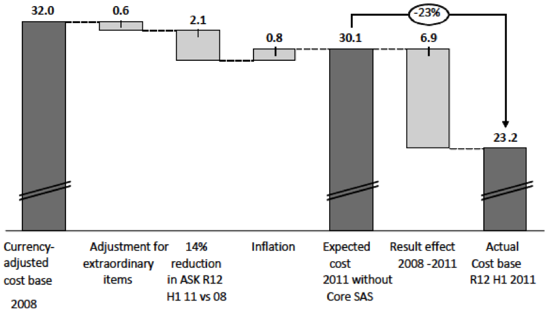 By the end of 2011, the group’s full-time employee headcount will have been reduced by 4,600. Under Core SAS, total headcount has hitherto been reduced by 4,200. SAS’ bloated workforce was a major weakness and the reduction in employee numbers is one of SAS’ key strategies to boost productivity, which has thus far proven successful.

Cost reduction efforts and productivity improvements are clear in the airline’s newfound profitability. Despite the 18% increase in group passenger numbers and the 12.3% increase in ASKs, total operating across actually fell slightly year-on-year. The majority of cost items were broadly flat even with the strong capacity growth, a remarkable result that reflects the airline’s stringent control of costs. Fuel costs were the airline’s only cost concern in the quarter. At SAS mainline, fuel expenses increased 22.3% to SEK1.774 billion (EUR194 million) in 2Q - the only notable increase in costs and not altogether unexpected. Group staff costs fell 7%. At Scandinavian Airlines, “other operating items”, fell 77.1%. This sharp fall reflects the SEK700 million (EUR76 million) loss SAS booked in 2Q2010 for the Apr-2010 ash cloud, of which a SEK790 million (EUR86 million) loss was related to lost revenues, SEK90 million (EUR10 million) for costs associated with the provision of food, accommodation and transportation of affected passengers, and a SEK180 million (EUR20 million) gain was booked due to reduced costs for jet fuel and fees. 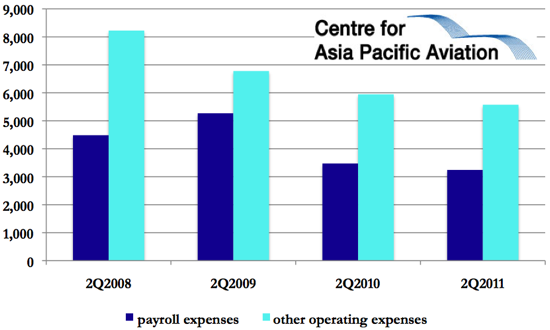 Total group operating expenses actually fell slightly in the period, despite the capacity increase. Reflecting the group’s efforts to cut variable operating costs, ex-fuel unit costs at the Scandinavian Airlines unit fell 5.1% in 2Q. Including fuel, unit costs were up 2.4%, which compares favourably to the 6.6% unit revenue increase.

The group has hedged 56% of its anticipated fuel consumption for the 12 months ended 30-Jun-2012. The airline stated its financial policy is to handle changes in jet fuel costs primarily through hedging of jet fuel, price adjustments and yield management. The policy for jet-fuel hedging states that this can be conducted up to 18 months ahead and that the interval for the 12-month hedging level is 40-70% of anticipated volumes. For foreign currency, the policy is to hedge 60-90%. In Jun-2011, the SAS Group had hedged 72% of its anticipated USD deficit for the next 12 months.

In 2QFY2011, SAS placed a firm order for 30 A320neos, signaling the acceleration of its fleet renewal programme and its intention to address one of its major weaknesses: its aging and relatively inefficient fleet. SAS’ high operating costs, due in part to its maintenance-intensive and fuel-inefficient fleet, have complicated its efforts to compete against younger, more flexible and more efficient airlines. Prior to the neo order, SAS had only five B737-800s on order, which would not cover replacement of its 26 MD-80s with an average age of 22 years and ten B737 Classics with an average age of 19 years. The order demonstrates the continuation of the airline’s short-haul fleet harmonisation process, deputy president Goran Jansson said in June at Paris Air Show, where the order was announced. which will see the rationalisation of the B737 Classics, B737NGs, MD-80s and A320-200s the airline currently uses on short-haul services.

SAS will rationalise its short-haul fleet by retiring B737 Classics and MD-80s by 2016, leaving only A320 standards, A320neos and B737NGs in SAS’ short-haul fleet. The fleet will be further rationalised when A320s, which will be leased to replace MD-80s retired by 2014, are in turn replaced by A320neos. SAS claims that replacing MD-80s with A320s and B737NGs will result in 20% decrease in fuel consumption and carbon emissions. Jansson expects an additional 15% saving by replacing A320s with A320neos. Cost issues resulting from hub fragmentation will also be addressed through SAS’ fleet strategy. The group’s resources are spread across three hubs (Stockholm Arlanda, Copenhagen and Oslo), which adds substantially to operating overheads. SAS plans to lease 17 B737NGs to operate from its Oslo and Stockholm bases while the A320s will be added only to its larger Copenhagen base. All Stockholm-based MD-80s will be replaced by B737NGs in 2013 and all Oslo-based B737 Classics will be replaced by B737NGs in 2014.

Mr Gustogson said he expected SAS to post a pre-tax profit for the year as forward bookings are "relatively stable" but gave a cautious outlook as "there is a higher degree of uncertainty regarding global economic trends, and that jet fuel prices and overcapacity, a common theme in Scandinavia this year, remain the carrier's largest challenges. SAS still faces risks from in Spanair, which the group sold in 2011 to a Spanish consortium for one euro but still maintains a 10.9% stake in the highly-leveraged, loss-making airline. SAS said that in the event that Spanair collapses, its total exposure is SEK1.8 billion (EUR197 million), but with a limited negative liquidity effect of SEK200-300 million (EUR22-33 million). Mr Gustafson said that there are “favourable” conditions for continued growth in the second half, noting that US and intra-Scandinavian routes are likely to deliver the strongest results. For both yield and jet fuel prices, the outlook remains uncertain, but the fuel surcharge had a positive impact on yield.

SAS has made great strides towards profitability in recent years but there still remains substantial work to do at the group, particularly in restructuring the loss-making Blue1. The group is now on more stable financial footing compared to the precarious situation in recent years, however cash flow from commercial activities remains patchy, and is still often in negative territory, which encourages higher levels of net debt. Core SAS is now in its final phase, with the CEO to present a “renewed strategic approach” before the end of 2011. The airline says the new strategy will create conditions for profitable growth, establishing a climate for cooperation, strengthened leadership and a passionate customer focus. SAS will continue to trim costs, Mr Gustafson confirmed, but added the new strategy is unlikely to include a new “big cost-savings package”.

SAS cannot afford to lose sight of its newfound cost-awareness and must continue to develop more efficient processes in the ground and in the air. The short-haul nature of SAS’ operation will prevent it from riding the economic upswing brought by strengthening demand for long-haul and premium travel, which has been a key driver of revenue gains at rival airline groups. More importantly for SAS, intra-European routes are expected to continue their “structural decline” for legacy carriers, where the market shares attributable to full-service and low-cost carriers will move in opposite directions and see premium passengers increasingly travel in economy. SAS must adjust and lower its cost base in face of low-cost carriers being on its heels. While Mr Gustafson would not comment on merger or acquisition possibilities, with the airline’s share price at historical lows and the new strategy to include a “favourable climate for co-operation”, SAS’ return to profitability may spur interest from the European airline groupings to the south. 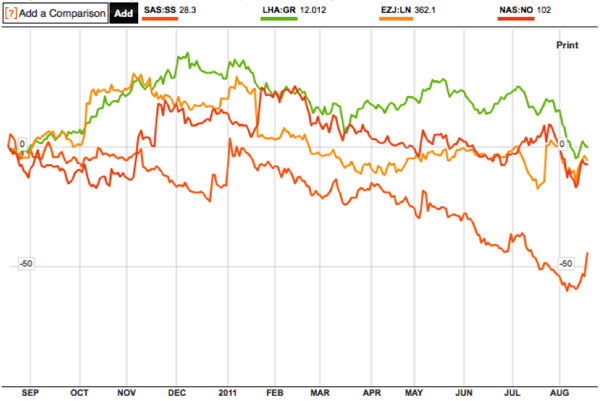