After improving its underlying profit in FY2015 and narrowing its losses in the seasonally weak 1Q2016, SAS suffered a widening of losses in 2Q2016. This was the first year-on-year deterioration in its underlying result for six quarters. It benefited from lower fuel prices and from its own cost savings programme, but experienced plummeting unit revenue.

This reflects the ongoing growth of LCC competition in short haul markets, but is also the result of its own capacity increase. SAS' growth is led by rapid expansion on long haul, where Norwegian is also providing LCC competition. SAS is investing in its network and product and growing its revenue from higher-yielding loyalty scheme members, but these measures do not appear to be giving sufficient support to unit revenue.

These trends are unlikely to dissipate any time soon, and there is now the real prospect that its FY2015 result represented a cyclical peak for SAS. The company recognises the need for further change in order to improve its competitiveness. Strategies to seek labour cost reform can be expected, in spite of a strike call by Swedish pilots.

In 2Q2016 (Feb-2016 to Apr-2016) SAS reported a pre-tax profit of SEK127 million (EUR14 million) – 64% reduced from SEK355 million in the same period a year earlier. The results for both periods included significant positive non-recurring items; in particular, in 2Q2016, a SEK655 reimbursement of cargo cartel fines that were paid to the European Commission in 2010 and, in 2Q2016, SEK678 million of gains on the sale of Heathrow slots. Adjusted for non-recurring items, the pre-tax result was a loss of SEK601 million (EUR65 million) – 82% wider than the loss of SEK331 million a year earlier.

The widening of underlying losses reversed the trend of 1Q2016, when the operating loss narrowed by 58% year-on-year to SEK269 million. Indeed, 2Q2016 was the first quarter since 3Q2014 in which SAS suffered a fall in underlying profitability.

SAS' shrinking charter operations continue to improve their levels of utilisation. It can be calculated that charter ASKs fell by 2.7%, but RPKs fell by only 2.0% (and charter passenger numbers grew by 2.9%), so the load factor gained 0.7ppts to 92.7%.

Capacity growth was mainly driven by SAS' long haul network, where ASKs increased by 30.9% in 2Q (26.2% in 1H), but RPKs grew by only 22.2% (19.7% in 1H). On routes between Scandinavia and Europe and on domestic routes, SAS increased its capacity at single-digit rates, but RPK growth did not match ASK growth in any route region (see table below).

Currency movements had a negative impact on total revenue, although it still would have fallen by 2.2% at constant exchange rates in 2Q2016. Currency-adjusted passenger revenue per ASK (PASK) fell by 11.5%, reflected both weak pricing (currency-adjusted yield per RPK fell by 9.2%) and the 1.8ppt load factor decline noted above.

SAS' total operating costs fell by 2.4% in 2Q2016, which was less than the fall in revenue and in spite of the increase in capacity. Fuel costs fell by 34.9%, thanks to lower market prices for jet fuel (partly offset by SAS' hedging programme and exchange rate movements).

Ex fuel costs increased by 7.8%, but this was still less than the growth in ASKs. Maintenance costs grew by 52.1%, mainly due to more extensive maintenance and changed assessments for future engine maintenance, as well as return requirements on leased aircraft.

Labour productivity improves, but Scandinavian labour terms are a disadvantage

The airline's 2Q2016 labour costs fell by 4.9% and average headcount fell by 7.5%, in spite of capacity growth, and this was a welcome indication of improving productivity. Nevertheless, labour costs are SAS' largest cost category; the company is based in a region that gives it a disadvantage in terms of labour costs.

This was recognised by the CEO, Rickard Gustafson, in the 2Q results announcement: "At present, SAS is the only airline that operates between Scandinavia and Europe where the flight crews are exclusively subject to Scandinavian employment terms".

This highlights the need for change with regard to labour costs. Either SAS will need to negotiate new terms for its employees or it will need to consider a more flexible employment strategy, incorporating crews based in other countries. As the LCC Norwegian continues to provide growing competition to SAS – now also on long haul – the need for further structural reform of SAS' labour costs will become more urgent.

Recent talks with pilots over their collective labour agreements have led to agreement with SAS' pilots in Norway, but have led to strike calls by SAS' Swedish pilot union. Labour negotiations are not always guaranteed to run smoothly, but improved cost efficiency is a strategic imperative for SAS.

Unit revenue weakness an enduring trend, due to LCC competition…

The weakness of passenger unit revenue has been an enduring trend in SAS' markets throughout much of this decade. This partly reflects the impact of price-based LCC competition, particularly in the short/medium haul markets that account for the majority of SAS' capacity.

Number of seats between Scandinavia and Europe by airline type, FY2010 to FY2016* 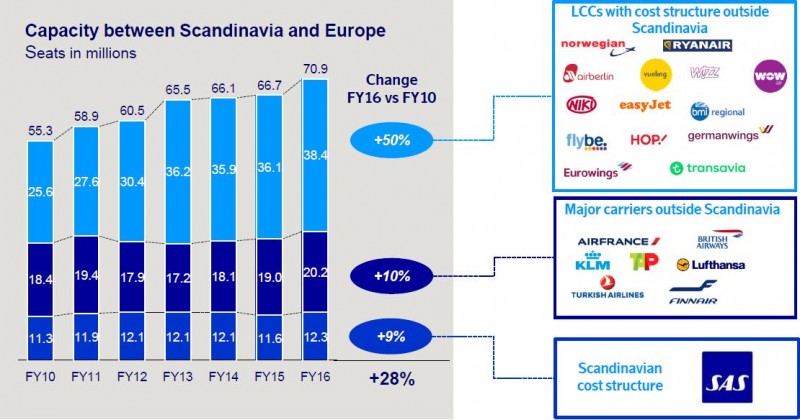 This unit revenue softness is also a function of SAS' own capacity growth. In each of FY2011 to FY2014 SAS increased ASKs and its unit revenue fell. In the first three quarters of 2015 SAS cut its ASKs and achieved growth in currency-adjusted PASK. Since the return to ASK growth in each quarter from 4Q2015, its PASK has resumed its downward trend. 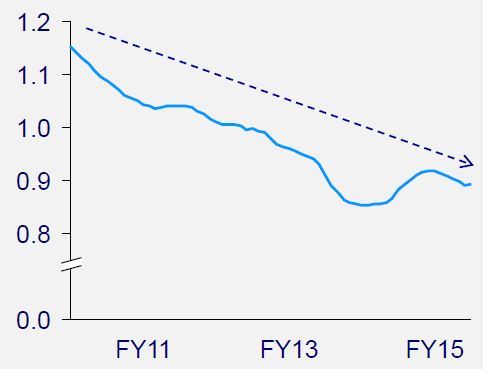 Loyalty scheme grows as SAS attempts to differentiate itself

One of SAS' priorities in order to increase its differentiation from LCC competitors is to focus on Scandinavian frequent travellers and to grow its loyalty scheme membership. SAS is also investing in digitalisation in order to provide a more customised approach to its frequent flyers. This is part of its strategy to attempt to give more solidity to unit revenue. 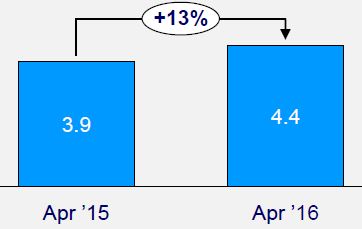 Long haul growth is also a response to its frequent flyers

It has also invested in widebody cabin upgrades and added more destinations (Hong Kong, Miami, Los Angeles and Boston all added over the past year). In 2Q2016 it carried a record number of long haul passengers and achieved a load factor close to 75% in business class.

SAS has maintained its outlook for FY2016. It will grow ASKs by 10%, compared with expected market seat capacity growth of 5% to 6%, but it will increase its number of flights by only 1%. Capacity growth will be driven by a 25% increase in long haul ASKs. SAS expects lower unit revenue and lower unit cost and to report a positive pre-tax result before non-recurring items.

In spite of SAS' investment in its network and product, a combination of market conditions and its own capacity growth mean that unit revenue looks set to remain on a downward path. Lower fuel prices and SAS' cost efficiency programme should ensure that it can keep unit cost below its unit revenue for FY2016.

However, although SAS' underlying 1H2016 result was better than that of the same period a year earlier, the deterioration from 1Q to 2Q highlights the unpredictable nature of SAS' profits. Given its highly seasonal profit pattern (losses in 1H and profits in 2H), there is still plenty to play for in FY2016.

SAS' reconfirmation that it aims for a positive underlying pre-tax profit is entirely credible. However, it also leaves scope for the result to be lower than last year's SEK1,174 million. Its operating margin was 4.1% in 2015, when the global airline industry's collective operating margin reached a new high of 8.3% (according to IATA).

The global industry is forecast (by both CAPA and IATA) to achieve an even higher margin in 2016. SAS has done much in recent years to become more competitive. Nevertheless, the possibility that its 2015 margin could turn out to be its cyclical peak demonstrates the ongoing need for further structural reform.

Mr Gustafson, the CEO, understands this: "Given this background", he has said, "we have to continue to change to thereby ensure long-term competitiveness and a sustainable return for our shareholders.”