SAS, Norwegian and Finnair. The Nordic three continue to carve out separate niches

Three years ago, CAPA suggested in an analysis report that the Nordic region might be ripe for airline consolidation. This has not happened. The region – Finland, Sweden, Norway and Denmark – remains the only corner of Europe to be home to three significant airlines that are not owned by one of Europe's three major legacy airline groups. SAS, Finnair and Norwegian Air Shuttle have all grown over the past three years and have sharpened the differences between them.

This report analyses seat capacity growth in the Nordic region over the past 10 years. In that time, SAS has retained its capacity leadership in the region, while LCC Norwegian has usurped Finnair's second position. However, overall share of seats in the Nordic region operated by LCCs has been falling since 2013.

Ryanair, in particular, has cut Nordic capacity in recent years although it is growing once more in Denmark, and easyJet has never made a big impression on the region (although Wizz Air is enjoying strong growth in Nordic markets from a low starting point). Norwegian is growing more rapidly in markets elsewhere.

See related report: Finnair, SAS and Norwegian, The Nordic Three: is consolidation on the way?

Focusing on the four principal countries of the Nordic region, Norway, Sweden, Denmark and Finland, the three leading airlines are SAS, Norwegian and Finnair. By seat capacity in the four countries, they are approximately in the ratio 3:2:1, respectively. SAS's size advantage versus Norwegian and Finnair, in terms of seat numbers, is mainly based on its presence within the Nordic region. This comprises the domestic markets and the international markets between the four countries in the region.

According to data from OAG Schedules Analyser, in 2016 SAS will only operate 10% more seats than Norwegian in international markets from the region to destinations outside the region, and less than twice Finnair's seat numbers in extra-Nordic international markets (markets outside the Nordic region). These more far-flung markets account for around one quarter of SAS seats, one third of Norwegian's seats and almost one half of Finnair's in 2016.

Nordic seat numbers up nearly one third over 10 years, mainly due to international growth

This growth has been largely driven by international markets, where seat capacity is up 50% in 2016 versus 2006, while domestic seat numbers have grown by only 10%, and have stagnated since 2011. 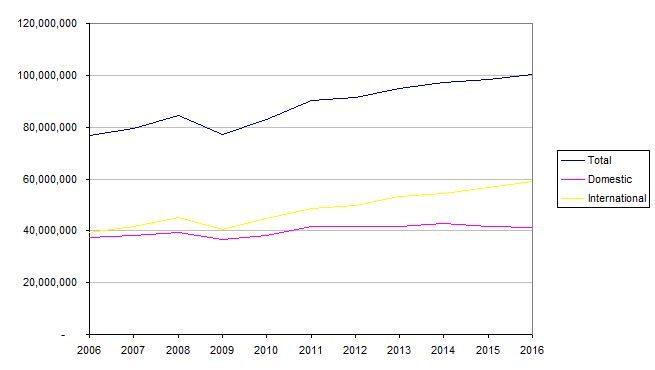 SAS is still number one in the Nordic region, but others have grown faster

SAS has remained the largest airline by seat numbers in the Nordic market throughout the 10 year period, in spite of heavy capacity cuts during the global financial crisis and the strong rise of Norwegian. From 2006 to 2016, SAS seat numbers are up by only 7%, compared with a rise of 373% for Norwegian. Finnair has grown by 32% over the 10 years, Widerøe by 30% and Ryanair by 27%.

Among the smaller players' shares in the region, Malmö Aviation's seat capacity has more than doubled (up 108%) and Wizz Air's has increased more than sevenfold (up 635%) from 2006 to 2016. 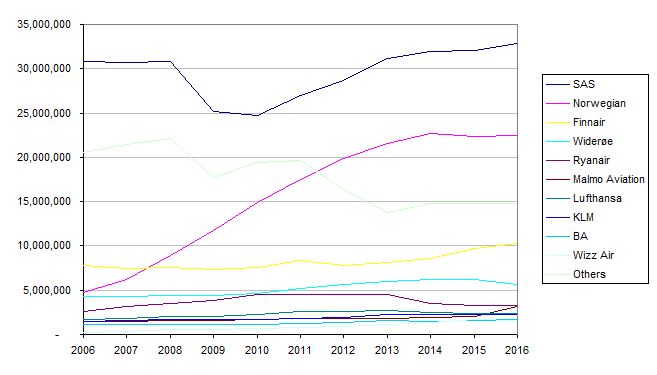 Norwegian's growth has levelled off

Norwegian's strong growth in the region over the past 10 years was all achieved by 2014, since when its capacity has been flat and its market share has fallen slightly from 23% to 22%. 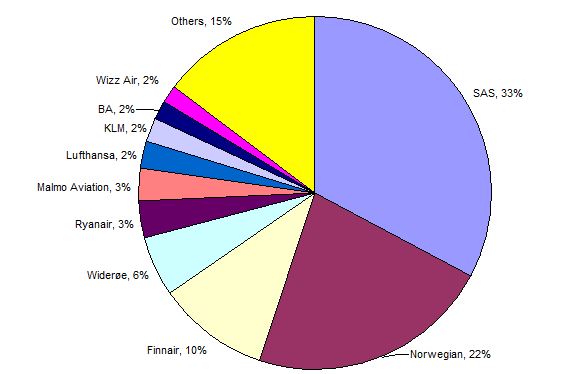 The leading LCC in the region is Norwegian, followed by Ryanair. Norwegian's capacity stagnation and Ryanair's capacity cuts (its seat numbers in 2016 will be 28% below their 2013 level) mean that the total share of seats held by LCCs will fall to 30% in 2016, down from its peak of 32% in 2013. 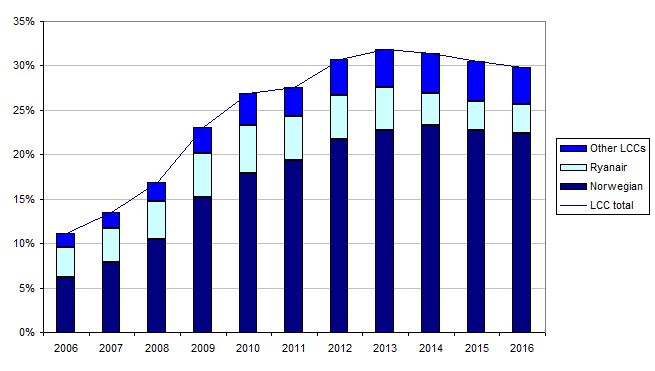 SAS has not regained 2006 capacity in domestic markets

However, in spite of Norwegian's growth over the 10 years, its domestic capacity has fallen more recently: its 2016 seat numbers will be down by 3% from 2012, and by 5% from 2014. This has been the main reason for its overall flattening of capacity in the region.

Concurrently, SAS has grown its domestic capacity by 22% since 2010, although this has not been enough to make up for cuts before then.

In market share terms, SAS has a bigger lead in the combined domestic markets than in the region as a whole. Its 40% share compares with second placed Norwegian's 28%, and has increased by 2ppts since 2012. Widerøe has a 12% share and Finnair 8%. Malmö Aviation's share of Nordic domestic seats will also be 8% in 2016, up from 4% in 2014. 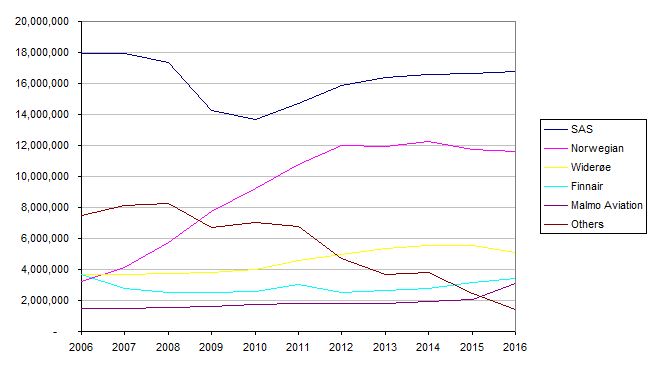 SAS' growth has been outpaced by others on international markets

In international markets, SAS' growth in seat numbers since 2009 has more than offset previous cuts, so that its 2016 capacity will be 26% above its 2006 level. However, SAS' growth has been outpaced by every other sizeable player in these markets.

Norwegian's international seat numbers to/from the four Nordic countries has grown more than sevenfold (up 620%) over the 10 years. Moreover, unlike in domestic markets, Norwegian has continued to increase its international capacity throughout the period, although its growth has slowed in more recent years (up only 4% since 2014).

SAS has a 27% share of international seats to/from the Nordic region, followed by Norwegian on 18%, Finnair on 12% and Ryanair on 6%. Lufthansa and KLM have 4% each, and BA has 3%, a share now matched by Wizz Air. Thomas Cook Group and airberlin both have 2% in 2016. 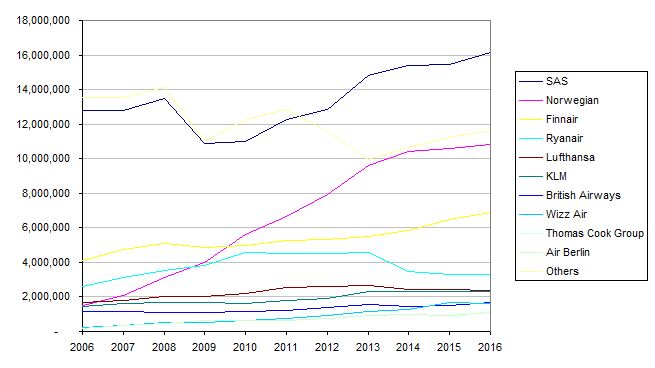 SAS is more dominant in intra-Nordic international markets, where growth has been slower 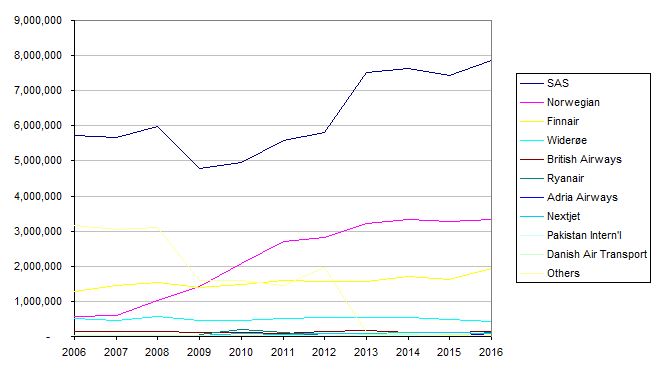 International seat numbers to countries outside the region will be 62% higher in 2016 than in 2006, making this the fastest growing segment over the past 10 years. SAS cuts in 2009 have been more than offset by a 36% increase in capacity since 2010. SAS has increased its seat numbers by 17%, while Norwegian has grown by 712%, Finnair by 74% and Ryanair by 22% over the 10 years.

Norwegian's growth in these markets has continued through the period, although at a slower pace since 2014 (up 17% from 2014 to 2016). Ryanair's 2016 seat capacity on international markets between the four Nordic countries and the rest of Europe is down by 30% relative to 2013, reversing much (but not all) of its previous growth since 2006.

Since 2013, Ryanair's seat numbers are down 43% to/from Sweden and down 33% to/from Norway. Ryanair's only recent growth market is Denmark, where it has increased seat numbers by 135% since 2014 (and more than sixfold since 2006). 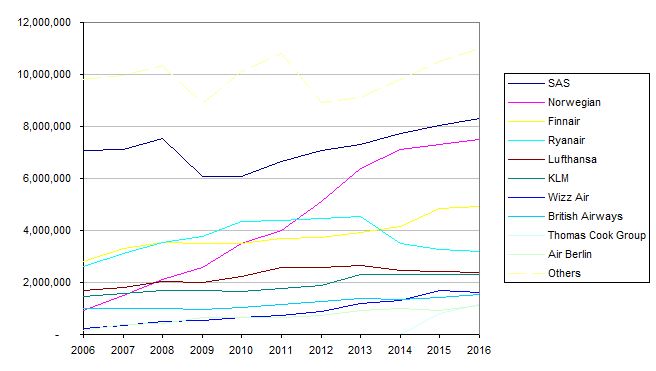 The Nordic three have different niches

Much of SAS' strength in the region is built on its high market share in the domestic and intra-Nordic markets.

Norwegian's contraction within the region has helped SAS to consolidate this position, giving it some respite in which to recover from the global financial crisis. SAS is also still the leader on extra-Nordic markets, but Norwegian is now pushing it close.

Norwegian's plans to grow at double digit rates led by long haul growth, at least until 2020, may well make it larger than SAS on international markets to/from the Nordic region within a few years, and this could also make Norwegian the largest airline overall in Nordic markets some time thereafter.

Finnair continues to focus on its niche on long haul markets to Asia, where it will resume capacity growth in 2016, and is also growing on the North Atlantic. It is currently proportionately more long haul than either SAS or Norwegian.

Overall, both of the region's two main legacy airlines have been surprisingly successful at holding their market share in recent years. The LCC onslaught, led by Norwegian within the Nordic region and by Ryanair from outside, has retreated somewhat since 2013. Norwegian has focused on markets outside the region and Ryanair has followed a typically opportunistic approach.

Ironically, the high costs of operating in the Nordic countries may have helped SAS and Finnair by encouraging LCCs to consider moving elsewhere. However, like water flowing downhill, success tends to seek out the most cost-efficient operators.

SAS and Finnair have made good progress with restructuring, but they cannot afford to relax. Nor can Norwegian rest on its laurels if ultra-LCC Ryanair decides to replicate its return to growth in Denmark across the rest of the region.