SAS has had a relatively good year by comparison with its troubled past. In the year to Oct-2015 its net result returned to profit, and its operating margin was its best for at least a decade. It also managed to reverse a multi-year trend of declining unit revenue. This was partly due to favourable currency movements, but also reflected tight capacity management and SAS' focus on enhancing its product for frequent flyers.

Looking ahead to FY2016, SAS plans to expand its long haul network, where ASKs will grow by 25%, driving an overall ASK increase of 10%. This growth should help to lower CASK, but will also have a negative effect on RASK. The trade-off between these two variables will determine whether or not SAS can further improve its profitability in FY2016.

Highest operating margin for at least a decade

SAS returned to profit at the net income level in FY2015, with a positive result of SEK956 million, compared with a loss of SEK719 million a year earlier. Its operating profit (before non-recurring items and results from affiliates) was SEK1,643 million, more than five times the FY2014 result.

Revenue grew by 4.3% to SEK39,650 million, and the operating margin (before non-recurring items and results from affiliates) improved by 3.4ppts to 4.1%, its highest level for at least a decade. Nevertheless, this remains a thin margin by global airline industry standards. CAPA's forecast for global operating margin in 2015 is currently 5.9%, while IATA's latest forecast, issued in Dec-2015, is 7.7%. 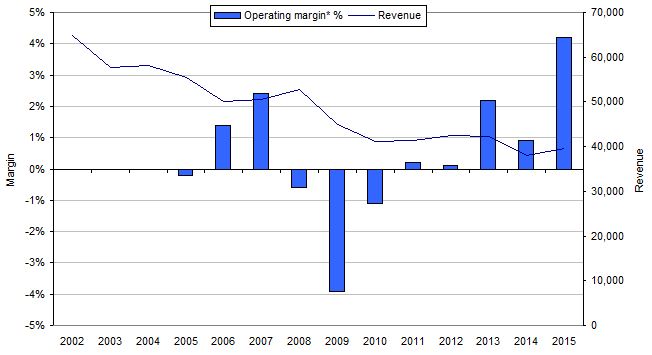 SAS' balance showed further improvement during the year as a result of its return to net profit and improved operating cash flow. It also continues to benefit from the issue of SEK3.5 billion of preference shares in Feb-2014.

Its year end cash balance increased from SEK7,417 million a year earlier to SEK8,198 million at the end of Oct-2015. This was equivalent to 75 days of revenue, compared with 71 days at the end of FY2014. SAS' preferred liquidity measure is financial preparedness, which is its cash and liquid assets as a percentage of the past 12 months’ fixed costs. This stood at 40% at the end of FY2015, up from 37% a year earlier and comfortably ahead of its target of 20%. 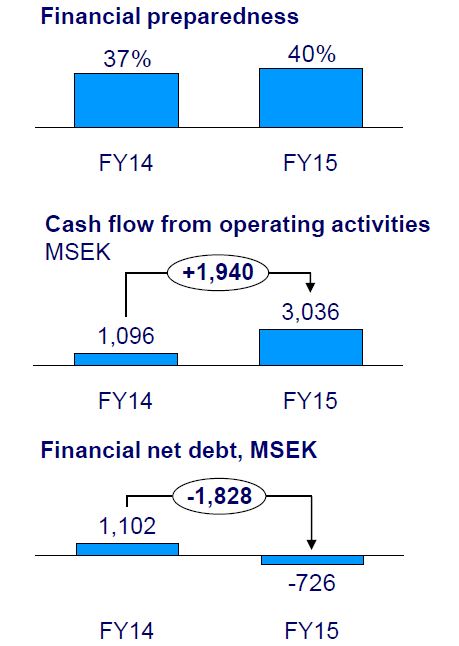 Total ASKs cut by 1.9% due to lower charter activity, but load factor softens

SAS reduced total ASKs (scheduled and charter) by 1.9% in FY2015, and passenger numbers fell by 1.1%. In spite of the capacity cut, passenger load factor dipped slightly, shedding 0.3ppts to 76.3%.

This remains an area where SAS falls short of the industry norms of load factor now in the region of 80% or more, both in Europe and globally.

The overall capacity reduction was mainly due to a further cut in charter capacity. Scheduled ASKs were down, very slightly flat in FY2015 (-0.2%), and we calculate that charter ASKs fell by 18.5% to represent 8% of the total (down from 9% in FY2014).

There was not much variation in scheduled ASK growth by route network: long haul capacity was down 0.3%, Europe/intra-Scandinavia down 0.5%, and domestic capacity up 0.5%. Scheduled load factor was flat (-0.1ppts) at 74.8%, lower than the total load factor. We calculate that charter load factor gained 1.0ppts to 94.4%.

Total RASK was up 6.4%, halting years of decline

Scheduled passenger revenue per ASK increased by 6.5%, although this partly reflects currency movements. SAS reported that the increase on a currency adjusted basis was 3.8%, still a healthy improvement, and a turnaround from the 5.8% decline reported for FY2014, when scheduled ASK growth was 4.4%. There is a clear inverse relationship between ASK growth and unit revenue growth.

In addition, SAS' investment in product and service quality may also be paying off. The number of members in its EuroBonus loyalty scheme grew by 14% to 4.2 million in FY2015, and passenger revenue was up by 6%.

Total revenue growth of 4.3% outstripped total ASK growth of -1.9%, so that total RASK increased by 6.4%, according to our calculations. This was the first RASK increase for at least eight years and the first time that ASKs had not grown since 2010, further underlining the beneficial impact on RASK of capacity discipline.

On the basis of reported numbers (rather than currency adjusted), we calculate that total operating cost per ASK (CASK) increased by 2.8% and ex fuel CASK increased by 4.3%, its first increase since 2009. Fortunately, SAS achieved an improvement in its operating margin because the growth in RASK was stronger than the growth in CASK.

Although the small reduction in ASKs made it more challenging to lower unit cost, since there were fewer ASKs over which to amortise fixed costs, this suggests that SAS still has plenty of scope to improve cost efficiency. SAS has one of the highest levels of unit cost among European airlines, taking account of average trip length.

To his credit, CEO Rickard Gustafson acknowledged this weakness in the FY2015 results announcement: "We now need to work even more intensively with implementation of the continued cost measures to improve our long-term competitiveness". 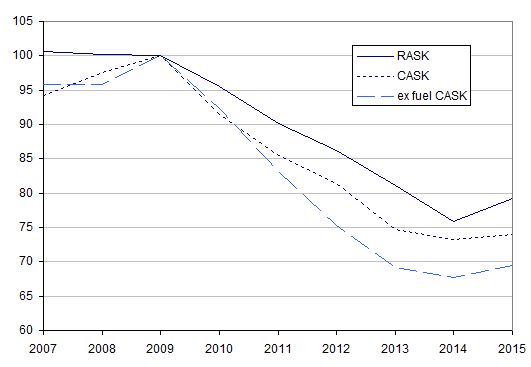 In FY2016 (year to Oct-2016), SAS expects seat numbers in the market in Scandinavia to increase by between 5% and 7%, with the highest growth occurring in the winter 2015/2016 part of the year. This compares with virtually flat capacity in FY2015. In its results statement, SAS notes that higher rates of capacity growth are expected to lead to "more intense competition in some areas".

SAS plans to increase its ASKs by 10% in FY2016, with long haul expansion accounting for 9%, as a result of an ASK increase of 25% on routes to the US and Northeast Asia. The total number of flights will grow by only 1%. The planned FY2016 ASK growth of 10% is higher than the tentative range of 3% to 5% indicated by SAS CEO Rickard Gustafson on a conference call with analysts at the time of the airline's 3Q results in Sep-2015.

In addition to new services to Hong Kong (launched in Sep-2015), Los Angeles and Miami that were previously announced at that time, SAS has since then also announced plans to add Copenhagen-Boston to its route network in Mar-2016, with a daily year-round service.

The Boston route will be operated for SAS by PrivatAir, using an 86 seat Boeing 737-700 Business Jet with 20 business class seats and 66 economy seats. This pre-empts Norwegian Air Shuttle's launch of Boston services from both Copenhagen and Oslo in May-2016.

The North Atlantic market from Scandinavia is growing rapidly, stimulated by Norwegian's entry in 2013 but with SAS also an active participant. Both have grown market share at the expense of United and Delta, and it seems that SAS' assessment is that the emerging duopoly can support more growth.

On the short haul network there are some frequency increases, but there are also new routes, including three from Gothenburg: Paris CDG, Brussels and Umea. 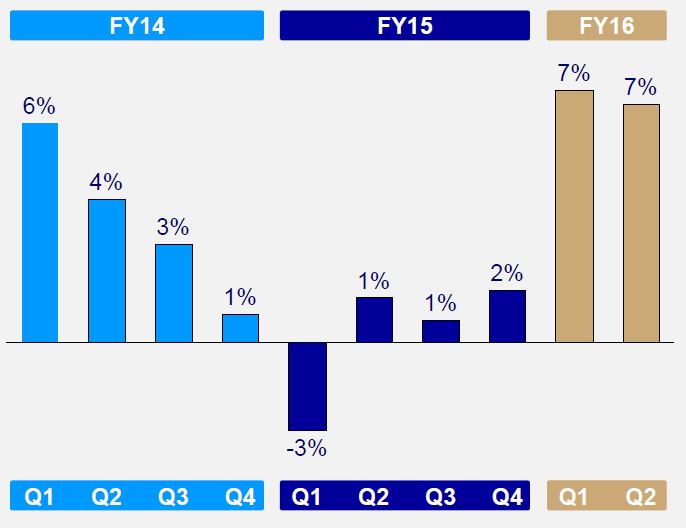 SAS expects both RASK and CASK to fall, but is cautious about setting a profit target

Due to its planned ASK growth, and in particular the increased average stage length, SAS expects both RASK and CASK to fall in FY2016. Its cost efficiency programme is expected to produce SEK1 billion of positive earnings impact. In addition, it has hedged 80% of its jet fuel needs for the year at prices in the range USD450-600 per tonne and expects its fuel bill to be lower in FY2016. Clearly, SAS is hoping that it can hold the reduction in RASK to a lesser rate than the fall in CASK in FY2016.

In terms of a profit target, SAS is only saying that it expects a positive pre-tax result before non-recurring items in FY2016. This is the same as the outlook that it gave a year ago for FY2015, when its pre-tax result before non-recurring items turned out to be SEK1,174 million. Mr Gustafson told analysts that there were many uncertainties in the market for air travel.

For example, the terrorist attacks in Paris had damped demand, although he expected demand to "come back". To such geopolitical risks can be added uncertainties over global economic growth. These uncertainties have induced caution in SAS, preventing it from giving a more precise profit outlook.

These kinds of risks are part of running an airline, and mean that forecasting unit revenue is less certain than forecasting unit cost, particularly when increasing the throttle on capacity growth in a competitive market.

SAS will be hoping that its 10% ASK growth planned for FY2016 does not prove to be a reckless leap.