SAS fell back into net loss in FY2014 and its operating profit margin was only 1.0%. It is achieving its cost reduction targets and moving towards a more effcient operation. Moreover, product and network initiatives have helped to stimulate load factor improvements and growth in the number of frequent flyer members using the airline.

However, in a highly competitive market-place characterised by capacity growth and downward price pressure, unit cost did not fall enough to offset the drop in unit revenue. SAS has now announced further cost savings plans and is reorganising its regional flying activities.

SAS has achieved much over the past two years, streamlining the group and cutting costs. It has lowered its CASK by 10% since 2012, bringing it more in line with other European FSCs. The problem is that the main competitive threat comes from the LCCs and SAS' cost base is still much higher than theirs. It seems it must always work harder just to tread water.

SAS falls back into net loss in FY2014

SAS reported a net loss of SEK719 million in FY2014 (year to Oct), compared with a profit of SEK1,358 million last year. As ever, there were a number of non-recurring items and the result was also weighed down by interest costs and charges related to a cancelled credit facility. The operating result before all non-recurring items and capital gains/losses remained in profit, but fell by 80% year on year to SEK377 million, with the operating margin falling by 3.4 ppts to 1.0%.

More encouragingly, SAS' 4Q FY2014 operating result improved by 15% year on year, the only quarter in the year to see an improved figure.

Although profitability has taken a turn for the worse, SAS' balance sheet improved during the year, thanks to the issue of SEK3.5 billion of preference shares in Feb-2014. This gives it some breathing space to pursue further restructuring.

Scheduled ASKs were up 4.5% and load factor gained 1.3 ppts to 74.9% in the scheduled traffic segment, which accounted for 91% of SAS' capacity in FY2014. Capacity growth was highest on routes in Europe/Intra Scandinavia (ASKs +4.9%) and lowest on domestic routes within the three SAS home countries (+3.3%).

In our analysis of SAS' FY2013 results in Dec-2013, we noted that, for FY2014, SAS was then planning to increase ASK by 3.4% in spite of what it referred to as “over capacity in certain markets and continued competitive yield pressure”. We suggested that its capacity growth plans might need to be lowered.

In fact, ASK growth in FY2014 was increased to 4.4% and this had a predictable impact on SAS' unit revenues.

Passenger unit revenue (passenger revenue per ASK, PASK) fell by 5.8% on a currency-adjusted basis, as a yield decline of 7.4% was only partially offset by higher load factor. This reflects the strongly price competitive nature of SAS' markets. CEO Rickard Gustafson told analysts on a conference call to discuss the FY2014 results that the yield environment was most challenging on the Europe/Scandinavian market, where capacity growth was also strongest (both competitors' and SAS' capacity).

Overall, Mr Gustafson said that the yield outlook was more stable due to reduced levels of capacity growth in the market. Indeed, in 4Q FY2014 (when capacity growth was a little slower), SAS' currency-adjusted yield decline narrowed to 3.1% and its PASK was almost flat (-0.1% year on year). SAS plans a capacity cut of 1% to 2% in FY2015, which should have a beneficial impact on yields.

SAS' currency adjusted unit cost (cost per available seat kilometre, CASK) fell by 2.8% in FY2014, reflecting management's cost focus and the restructuring programme launched in Nov-2012. This programme aimed to achieve SEK3 billion of cost savings by 2015. By the end of FY2014, it had achieved SEK2.7 billion of savings and SAS expects to make the remaining SEK 0.3 billion of savings to reach the full target in FY2015.

SAS' overall unit cost reduction since Oct-2012 is around 10%. The number of full time equivalent staff in the SAS Group fell by 17% from FY2012 to FY2014 and the use of outsourcing has increased the flexibility of the cost base.

…but does not match unit revenue decline in FY2014 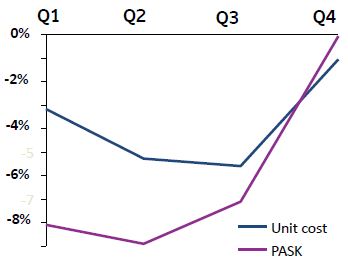 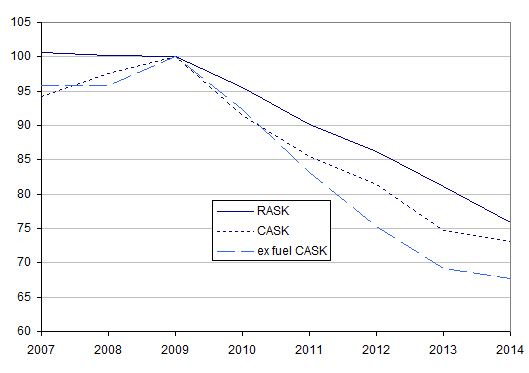 The weakness of yields and the slower rate of decline in CASK has prompted SAS to announce new and incremental cost reduction targets for 2015-2017, with a cumulative total earnings impact of SEK2.1 billion. Together with the SEK0.3 billion of savings still due from the previous cost programme, SAS is now aiming for SEK2.4 billion in savings by FY2017. 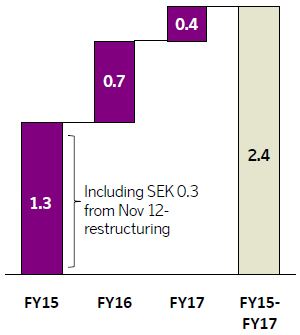 Under Mr Gustafson, SAS has done much to achieve its aim to "make life easier for Scandinavia's frequent travellers". The introduction of new fare categories SAS GO and SAS PLUS, changes to the EuroBonus FFP, improved lounge facilities, new fast tracks and increased self service processes have all combined with network changes, improved punctuality and an increase in daily departures per route to drive up load factors and increase revenues from EuroBonus members (+19% year on year in 4Q FY2014). It is also now planning a new long haul route, Stockholm-Hong Kong, from Sep-2015.

However, Scandinavia's frequent travellers are increasingly accustomed to paying low fares as a result of LCCs from within the region (Norwegian Air Shuttle) and from elsewhere in Europe. Ryanair's announcement that it will establish a new base in SAS' main hub at Copenhagen from Mar-2015 and Norwegian's continued expansion will ensure that price pressure remains an ongoing feature of SAS' markets, even with planned capacity cuts by SAS itself.

SAS CASK now in line with European FSCs, but still much higher than LCC competitors

SAS' unit cost reductions since 2012 have brought it into line with the FSC trend curve on a plot of CASK against average trip length for European airlines (see chart below), a very creditable achievement.

However, although it has a similar average trip length to that of many European LCCs, its CASK is still two thirds higher than that of Norwegian and 1.7 times the level of Ryanair's. Given this ongoing huge unit cost disadvantage, of course SAS is trying to emphasise its product and service superiority and its long haul network.

Unit costs (cost per available seat kilometre, USc) and average trip length for SAS 2012 to 2013 and selected other European airlines 2013*

Nevertheless, it is far from clear that this superiority will sustainably justify the price premium necessary to cover its much higher costs, particularly as LCC and ultra-LCC rivals improve their service quality and appeal to business travellers (Ryanair) and extend their long haul networks (Norwegian).

SAS is right to seek further cost efficiencies through its new cost programme and initiatives to increase further the flexibility of its cost base. These initiatives include the recent acquisition of regional operator Cimber, which has competitive labour agreements, for its CRJ900 operations, and the use of its Blue1 subsidiary as a wet lease provider to SAS following its restructuring through new union agreements and the divestment of its 717 aircraft by the end of FY2015. SAS has contracted Flybe to operate ATR turboprops on short haul routes from Stockholm under wet lease and also plans to resume talks with Swissport over the sale of its ground handling activities.

SAS has come a long way in recent years. It is more streamlined and is showing some signs of a shift towards a more cost-focused culture.

However, as the slim and declining FY2014 profit margin demonstrates, there is very little room for straying off course on either costs or revenues. With unit revenues more in the hands of market forces, the number one priority must continue to be unit costs.