Eurofly (+22.8%; see below), Ryanair (+7.0%), Iberia (+4.4%) and Aeroflot (+4.0%) were the biggest major airline share price rises yesterday. Eurofly shares have risen fourfold since the beginning of Mar-2009. The market also liked Ryanair’s move in the financial arena, with an aggressive interest-free credit card offering to users (see below).

Unlike American airline shares, which were down across the board later in yesterday’s cycle,  Austrian Airlines (-1.2%) and TUI AG (-2.7%) were the only two airlines in Europe to suffer more than marginal falls on a subdued day on the region's equity markets. 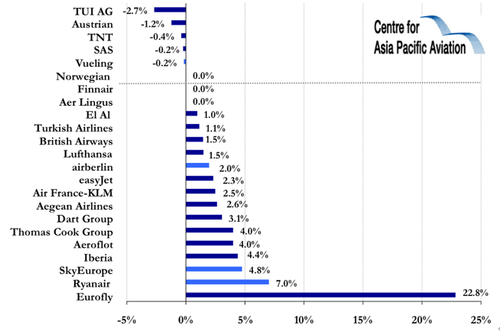 If you had wanted to ride the share market over the past few weeks, it would have been hard to beat Eurofly, the niche US-Italy operator, which has gone from strength to strength.

Eurofly yesterday had a further win, describing as a “positive” outcome the Italian Constitutional Court’s overruling of the 28-Aug-08 “Alitalia Decree”. This decree had followed the merger of Alitalia with Air One last year, thus avoiding the collapse of the Italian flag carrier. But the Court ruled that, concerning provisions which gave the carrier significant competitive slot advantages, “such discrimination is not reasonable”. Eurofly had suspended Milan Linate-Rome service in protest at the resulting slot shortage.

After reporting a solid profit in early May-2009, Eurofly’s share price has lifted resoundingly. 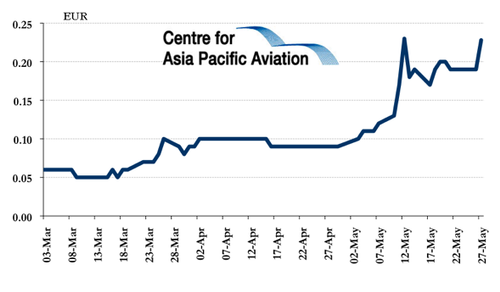 Ryanair offers 10 months of interest free on its branded card for “switchers”. A greater focus on financial services/rewards now?

Ryanair launched its credit card in 2002, but the new move appears to signal a much more aggressive approach to the finance sector. Anyone switching from another credit card will receive 10 months interest free on the balance transferred across. Most other cards have a similar programme, but the interest-free period generally lasts only six months. The Ryanair card is offered through MBNA Ireland. The interest rate on outstanding balances is 14.9% after the introductory period and 19.9% for cash withdrawals.

With an elemental rewards offering too, new customers will be rewarded with one return flight to a range of European destinations. According to Ryanair spokesman, Stephen McNamara, new customers will also be given the opportunity to run up even more debt: “Those taking advantage of our latest offer can also jet away to a host of European destinations as a reward for taking the first step in reorganising their finances”.

Whether the new offer reflects a new emphasis on financial services is not clear. But the innovative Ryanair marketers will surely be looking for further ways of exploiting the airline’s rapidly growing market power. Virgin Group offers a model for that, although the Ryanair brand perhaps does not have the same cachet.