In 2019 Ryanair Group regained from Lufthansa Group the title of Europe's biggest airline group by passenger numbers, with a 9.5% increase to 152 million passengers. Lufthansa Group slipped to second place, with 145 million.

Wizz Air enjoyed the fastest growth in the top 20, growing by 17.7% to almost 40 million passengers, and jumped over Norwegian (36 million, a fall of 2.8%) into eighth place. Pegasus Airlines entered the top 10 for the first time in spite of shrinking its passenger numbers by 0.3%, to just under 30 million. SAS shrank by 1.0% to slightly further below 30 million, and fell out of the top 10 for the first time.

The collapse of Thomas Cook Group allowed SunExpress and LOT Polish to enter the 2019 ranking in equal 20th place, both on just over 10 million passengers.

This report ranks Europe's top 20 airline groups by passenger numbers in 2019 and also includes a ranking of the top 20 individual airline brands.

The top four groups again all carried more than 100 million passengers in 2019.

LCCs account for seven of Europe's top 20 airline groups, one more than in 2018 thanks to the entry of the SunExpress brand (combining both the Turkish and German operators of the brand). Thomas Cook's exit leaves TUI Group as the only leisure group airline in the list.

TUI Group does not publish its airline passenger numbers, but CAPA estimates that it carried approximately 26 million, retaining its number 12 ranking.

In spite of again being in administration through all of 2019, Alitalia held its 13th place, with an estimated 21 million passengers – the same as 2018, in spite of a 1.3% cut in seat numbers reported by OAG data. 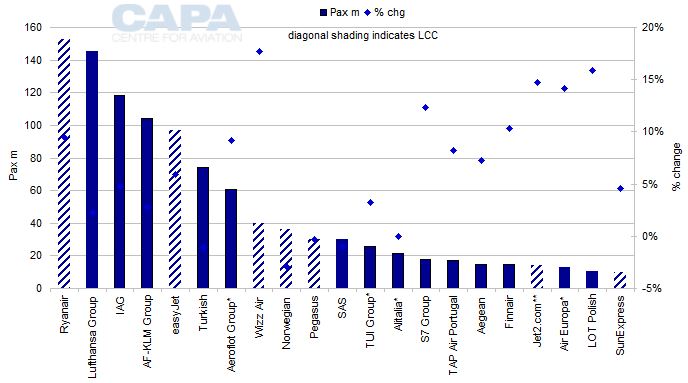 *Indicates 2019 passenger numbers not yet reported or not available; figures are CAPA estimates based on Nov-2019 YTD growth, calendar 2019 seat growth data from OAG, or other available data.
**Figures for 12 months to Sep-2019.
Source: CAPA - Centre for Aviation, airline company traffic reports.

In 2019, 12 airlines/airline groups sat just outside the top 20, with passenger numbers in the range of 5 million to 10 million. The biggest, Ural Airlines, carried 9.6 million passengers, a growth of 6.7%.

Thomas Cook Group's collapse has left its former subsidiary, the German leisure airline Condor Flugdienst, as an independent airline (at least for now). It carried 9.4 million passengers (year to Sep-2019), up by 6.9%.

The regional airline Flybe no longer reports traffic data following its acquisition by the Connect Airways consortium. OAG data indicate that it cut its seat numbers by 6.7% (year to Sep-2019). Assuming some continued load factor improvement, CAPA estimates just over 9 million passengers, which is a fall of 4%.

The Russian charter airline Azur Air reported 37.3% growth for 11M2019, which would lead to almost 6 million passengers if the growth rate applies for the full year – this is the fastest growth of any airline group in this analysis.

Four other airline groups carried in the region of 5 million passengers: Nordwind Airlines (estimated growth of 11.9%), Virgin Atlantic (estimated growth of 1.2%), airBaltic (22.1% growth reported, the second highest rate in the chasing pack), and Icelandair Group (reported increase of 5.1%, to 4.7 million).

Virgin Atlantic is part of the consortium that bought Flybe in 2019. If Flybe resolves its financial problems, it is planned that it will operate under the Virgin brand (although not fully controlled by Virgin Atlantic). Combining the 2019 passenger numbers of these two airlines amounts to almost 15 million passengers, and would displace Jet2.com at number 18 in the top 20. 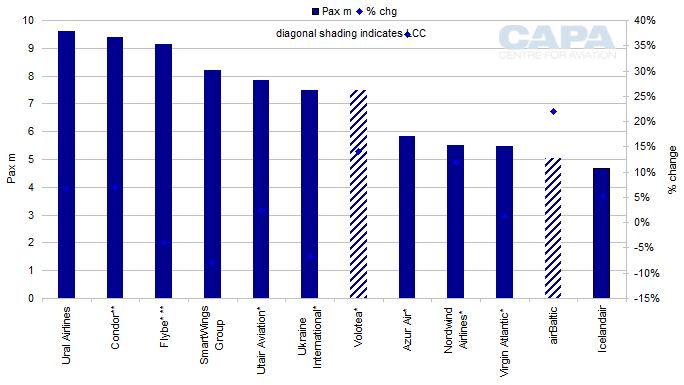 Most of the top seven groups have a range of individual airline brands, each telling a slightly different story.

The group does not break out traffic for the two brands, but CAPA estimates approximately 28 million passengers for LCC Eurowings and approximately 10 million for Brussels Airlines.

Among Lufthansa Group's network airlines, SWISS again grew the fastest, with a 5.7% increase to 21.6 million passengers.

Lufthansa remained the biggest brand (not only in the Lufthansa Group, but among all the subsidiary brands of Europe's top five groups), with 71.3 million passengers (up 2.0%), while Austrian carried 14.7 million (up 5.1%).

The Air France-KLM Group, which increased passenger numbers by only 2.7%, was again the slowest growing among the big three legacy groups in 2019.

Aeroflot Group enjoyed the fastest passenger growth among Europe's leading legacy groups, increasing by an estimated 9.2% to 60.8 million passengers (based on preliminary figures for Aeroflot, Rossiya and Pobeda and an estimate for Aurora).

Among the LCC groups, Ryanair Group reported 6.1 million passengers for its Austrian subsidiary Lauda, which only launched in 2018, and 146.3 million for Ryanair (it has not started to separate Malta Air or Buzz, its Polish charter subsidiary, from this figure).

EasyJet continues to operate as a single airline brand. Its almost 97 million passengers are considerably more than the individual airline brands of the other leading groups.

Turkish Airlines Group also only reports a single set of traffic figures (some of its domestic traffic is carried by its subsidiary Anadolujet, which has its own livery, but flies under the same TK code as Turkish and does not report separately). 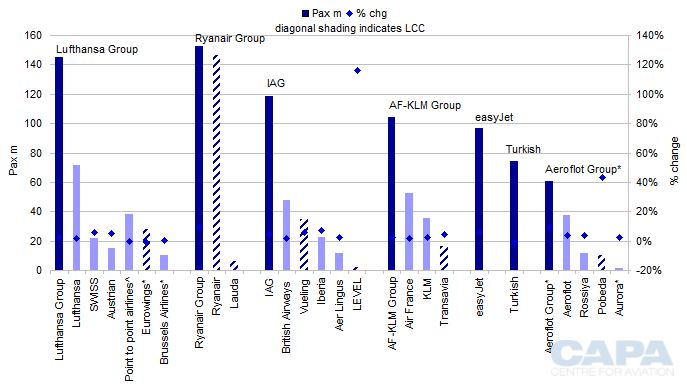 Ryanair was again the biggest individual airline brand by passenger numbers in 2019, with 146 million.

Ryanair carried 50 million more passengers than second placed easyJet (this difference is more than the total number of passengers carried by sixth placed British Airways). Its total was almost double that of third ranked Turkish Airlines. 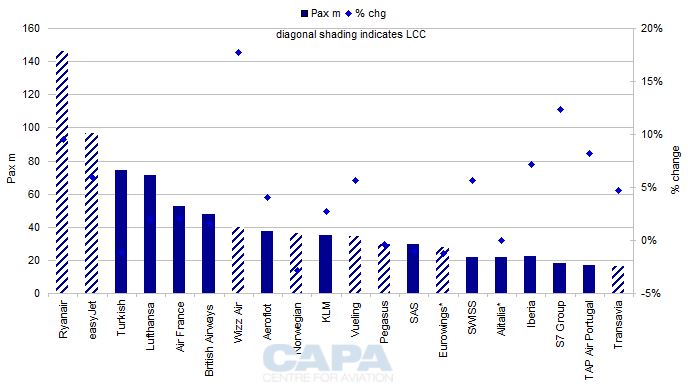 Ryanair Group should remain at number one in 2020

The difference between the traffic numbers for the two leading European groups in 2019, Ryanair Group and Lufthansa Group, was 7.2 million passengers. This is almost the same as the total traffic carried by Volotea and Ukraine International Airlines in 2019.

In the absence of very significant acquisitions (unlikely), no other group will challenge the top two in 2020. Moreover, Ryanair Group's return to the number one spot, which Lufthansa Group held for two years in 2017 and 2018, looks likely to endure this year.