Qantas offers to help JAL with LCC subsidiary, as part of oneworld strategy to keep JAL in alliance

As oneworld partners fight to maintain Japan Airlines in the global alliance, they have taken on a range of separate roles to encourage the ailing Japanese flag carrier to stay with them. At the recent oneworld gathering in Mexico, member airlines reviewed their own respective strengths and expertise, to offer them as a way of providing support at every key point of JAL’s future operations.

This support strategy became necessary once it became obvious that a simple buyout solution – for example involving Qantas and American Airlines – would not work for them (or probably for JAL) and as Delta/Air France-KLM’s bid became more threatening. Taking JAL out of oneworld and into SkyTeam would be a major blow to the oneworld team. Within JAL and the fixit working group which has been established, there are wide divisions of opinion over which alliance offers the better options for the long term.

A strong presence in north Asia is vital to the grouping, which is otherwise largely unrepresented. JAL’s major competitor, ANA is part of the Star Alliance, Korean Air is SkyTeam and Asiana is Star Alliance. The major Chinese carriers are dominated by SkyTeam (China Southern), Star (Air China) and China Eastern, although a oneworld member, has recently merged with Star Alliance’s Shanghai Airlines.

Hong Kong’s Cathay Pacific is a oneworld member, but is partly compromised by its relationship and cross-shareholding with Air China – and it has also been notable for its absence in any supportive actions towards JAL recently, a feature that has rankled with its oneworld partners.

Jetstar model could be valuable for JAL

Qantas, with its “dual brand” structure, is perhaps the ideal partner to advise on establishing an LCC subsidiary, as the Jetstar model, working closely with the mainline Qantas, has been enormously successful.

The Japanese market conditions and route structures are very different from the climate in which Jetstar grew up, but as a global model it would seem that Jetstar’s founders could offer some pretty sound advice to JAL, whether it be to evolve its existing subsidiary into a genuine low cost model, or more likely, to start with a greenfield operation.

Just how important in the wider scheme of things this would be is unclear, as JAL goes through a major reincarnation. But it will be highly relevant that ANA has now made clear that it will be developing its own LCC subsidiary.

But Jetstar has been a lifesaver for Qantas, both in fighting off low cost competitors and then in expanding the Qantas Group’s market; Qantas now uses Jetstar to substitute for it on long haul routes from Australia, where the mainline carrier’s cost base makes operations unviable. The subsidiary for example recently took over the key Tokyo Narita route for Qantas, protecting the valuable slots from being lost to competitors.

From a minor event in its early days, Jetstar has evolved into a major airline, with rapidly growing international connections from Australia. It was to be the first recipient too of Qantas’ major order of B787s, although, with the delays in delivery of that aircraft, Jetstar’s international long haul fleet today consists of A330s 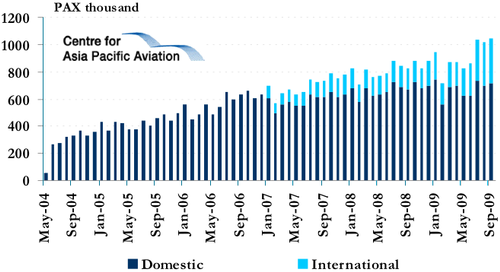 Qantas’s strategy is to be a substantial long term player in the Asian market, as its domestic market flattens out with maturity (and additional competition).

Using the Jetstar brand, it has been able to do something that would be unthinkable with the mainline carrier’s flagship status: establish offshore joint venture airlines, Jetstar Asia in Singapore and Vietnam (under the Jetstar Pacific brand in the latter case).

Qantas has not reported on the growth rate of these two entities, but in the three months to 30-Sep-2009, Jetstar Asia carried 414,000 passengers. 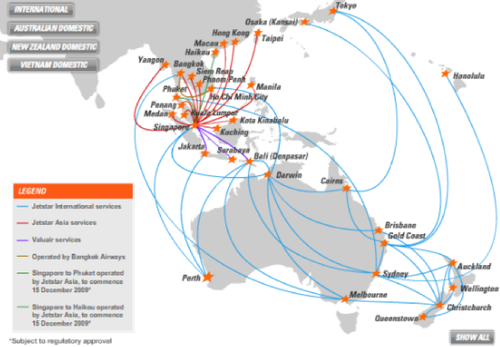 As well as the Australian A330 services to Tokyo and Kansai, Jetstar Asia also has a number of A320 shorthaul operations into neighbouring north Asian gateways - and the network is spreading.

Fleet growth is Growth is happening – Jetstar’s Singapore based fleet now consists of 5 A320s, with more to be allocated there, along with its Australian  fleet of 39 A320/321s and 6 A330s.

North Asia is the last bastion of resistance to the invasion of low cost operations, although foreign LCCs are gradually flying into China, Japan and Korea. The Centre has estimated that there is a potential market of over 200 million passengers annually, if international entry restrictions were removed.  Indeed, much of JAL’s future growth will be in short haul international services, even if its guns are pointing steadfastly in the direction of longhaul.

Apart from the possibility of supporting JAL into a successful LCC subsidiary, courtesy of Jetstar’s experience and support, there are clear potential advantages for both carriers if a successful venture were possible. There are no formal precedents for global alliance LCC subsidiaries working together, but then Asia is becoming the global powerhouse of aviation and is writing its own rules.

A stand-alone JAL LCC, working with Jetstar would itself offer advantages for both sides: for example, Jetstar is highly connective, codesharing not only with its parent, but open to others as well. Working jointly to support each other would alone deliver strong market presence. And the possibility of a joint venture –which would offer a lower-risk option on both sides – would seem to be a good solution, with considerable upside. And the advantage for oneworld would be in a tighter long term linkage into the Japanese flag carrier.

But there is a still lot of water to flow under the bridge before all of JAL’s contortions are resolved and an LCC subsidiary will not be a crucial decider (even if history will eventually prove that to be the deliverance for JAL). Oneworld will need to come up with many more persuasive arguments if it is to win the battle against a voracious and powerful Delta/SkyTeam combination for the hearts and minds of JAL and its advisors.