It is a positive development for Phoenix, which has had a cloud cast over it since US Airways and American Airlines embarked on their merger in late 2014. There are strong opinions that Phoenix’s geography and passenger demographics could make it weaker than other hubs in the combined networks of US Airways and American.

Going forward, Phoenix’s operational footprint for American may not resemble the framework of other hubs; but the airport retains unique advantages for the merged entity as it embarks on exploiting the full utility of the combined network. 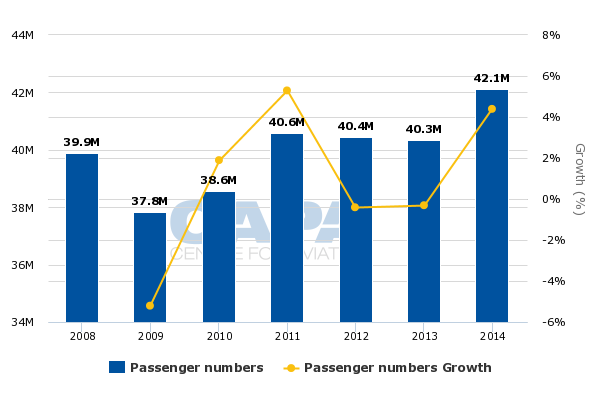 The airport has logged passenger growth every month through the first eight months of 2015, posting cumulative growth of 4.7% to 29.8 million. 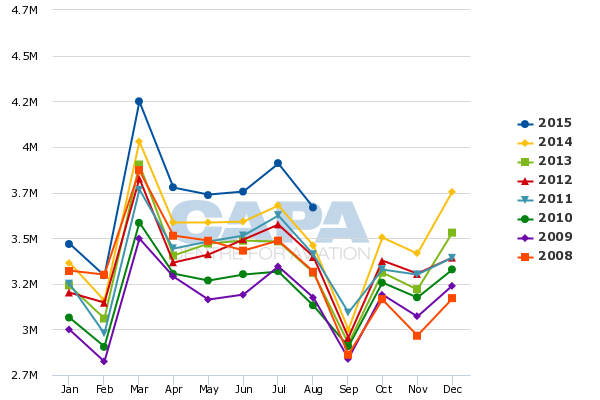 Sky Harbor has a unique position of holding hub status within the American/US Airways network and serving as a major focus city for Southwest. Phoenix is Southwest’s sixth largest base by measured by seats. 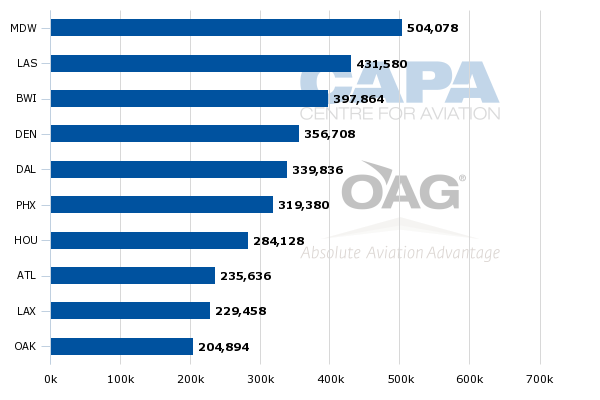 The airport is Southwest’s fifth largest base based on ASM deployment. 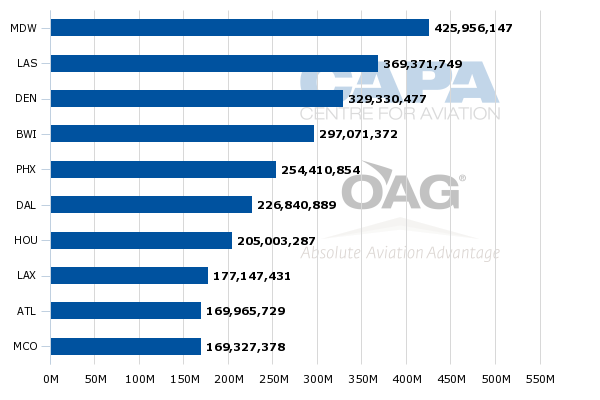 In the US Airways stand-alone network, Phoenix is the third largest hub by seats. The airport is a legacy America West hub and became a major hub for US Airways after the two airlines merged in 2005. 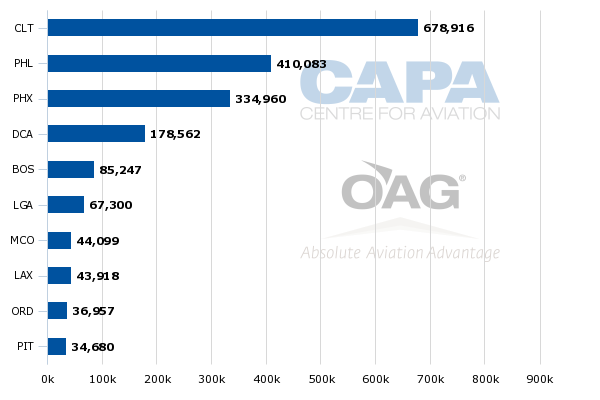 The airport is also US Airways’ third largest base measured by ASMs. 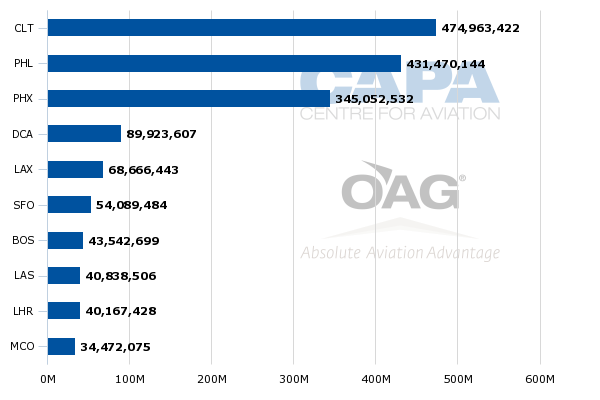 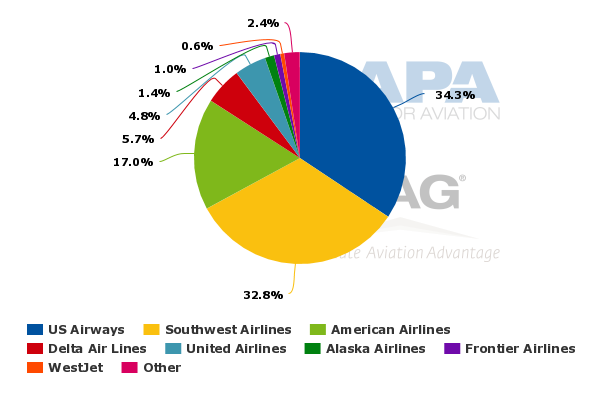 On a combined basis the two airlines account for 53% of Sky Harbor’s ASMs. 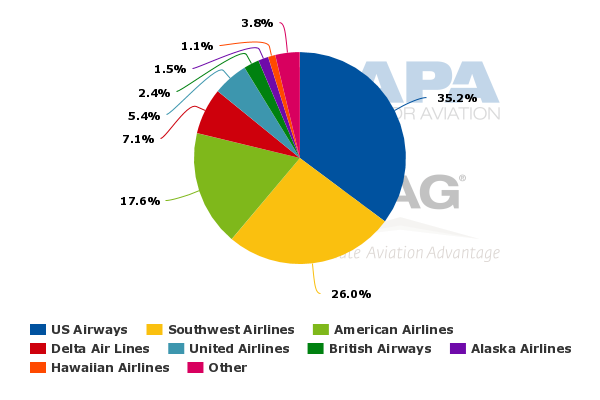 With US Airways and American representing more than half of the airport’s seats and ASMs, it is hard to conclude that the merged entity will take drastic steps to shrink Phoenix’s footprint in the near future.

One main driver casting doubt over Phoenix’s hub stature within the American network is its proximity to American’s hubs in Dallas/Forth Worth and Los Angeles. Phoenix is 1,396km from Dallas and 595km from Los Angeles.

Geographically, it would seem that Phoenix’s positioning within the combined American network is weak. But there are business dynamics at play that could render that logic incorrect.

All the large three global US network airlines deem Los Angeles as a hub. But as CAPA has previously concluded, the second largest travel market in the US is highly fragmented, and does not have the hub characteristics of having one dominant airline. American, Delta and United each have roughly a 16% share of the airport’s seats. 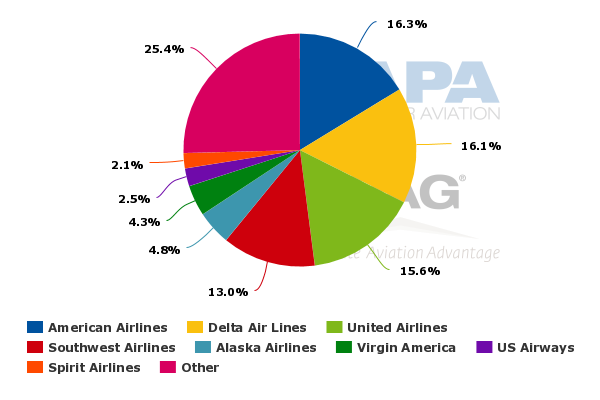 Obviously Los Angeles is a key airport for American and all major US airlines, but in some instances it could be more viable to flow some passengers through Phoenix, particularly from points in the north western region of the US such as Boise, for example,  as well as smaller markets in Nevada, New Mexico and southern Colorado. It is just as logical to flow passengers from those markets travelling to the US east coast through Phoenix rather than Los Angeles.

There is also the issue of costs. Phoenix’s cost per enplanement in fiscal 2013/2014 was USD5.79, well below the USD8.71 charged by DFW for fiscal 2015 and the USD17.00 at Los Angeles in 2015. Although the larger markets can support a higher cost per enplanement, in some cases it makes sense to utilise Phoenix’s lower operating cost for passenger flows.

The reality is the merged American will never have a true hub operation at Los Angeles that nears the scale of its other hubs, and Phoenix serves as a lever American can pull to perhaps more efficiently connect passengers to the US east and west coasts. While Phoenix does not have the revenue generation of Los Angeles or Dallas, Phoenix’s lower costs are also a key factor in how American will use the airport in its combined network.

Many pundits like to lump Phoenix into the grouping of other hub airports that have suffered drastic reductions in passenger throughput due to consolidation in the US airline industry. Memphis, Cincinnati, Cleveland and Pittsburgh are the obvious airports that are used for comparison.

That could change once the merger integration between US Airways and American is largely complete in mid-Oct-2015, but it is highly unlikely that Phoenix will suffer the same fate as other legacy hubs.

Part of the reason that Phoenix stands a reasonable chance of retaining its hub status is that both US Airways and American, before they merged, shuttered under-performing hubs including Pittsburgh, St Louis and Las Vegas. Arguably, each airline had optimised their separate networks before the merger occurred.

Phoenix also draws attention for its lack of intercontinental service. Its only long haul flight outside the Americas is British Airways’ flights to London Heathrow. That is not a scenario that is likely to change in the immediate future, given Phoenix does not have the business traveller base necessary to sustain long-haul service to Asia or Europe. DFW has served as American’s springboard for Asian growth during the last couple of years with the launch of flights to Beijing, Shanghai, Seoul and Tokyo Narita. In the case of long-haul flights, it makes sense to route Phoenix passengers through DFW for service to Asia and Latin America, and Los Angeles and east coast hubs for flights to Europe.

Airport officials told news outlet the Phoenix Business Journal that it continues to discuss with American the possibility of adding flights to Mexico, Latin America or the Caribbean, but have been told by the airline that current demand presently does not warrant flights to those destinations.

Sky Harbor in 2015 is garnering new service from Mexico when low cost airline Volaris starts flights from Hermosillo in Nov-2015, the new service joins the airlines existing flights to Phoenix from Guadalajara. The airport’s other international destinations (for the week of 12-Oct-2015 to 18-Oct-2015) include US Airways and American flights to Cancun, Edmonton, Los Cabos, Mexico City and Puerto Vallarta. WestJet also serves Phoenix from Edmonton and Air Canada operates flights from Toronto.

Phoenix also has a strong local passenger base, with local news outlet ABC15 recently quoting airport officials who stated 60% of the airport’s traffic is O&D travellers. Should American opt to downsize Phoenix, it has a strong local base of traffic to fall back on in addition to a strong presence from Southwest.

Phoenix's fate is tough to predict, but it holds a solid position in American's network

Although Phoenix has a different footprint from the combined American’s other hubs, it has some unique attributes that will make it relevant in future.

It may not garner the high profile routes that some of American’s larger hubs warrant, but its staying power should not be written off for the foreseeable future.