Peach Aviation, the first of a new wave of low-cost carriers to enter Japan, has reported a solid first month of operations, carrying in Mar-2012 approximately 67,000 passengers across three routes with a load factor of 83%, above initial projections.

This traffic, however, has come at the expense of parent company All Nippon Airways (ANA), which saw year-on-year traffic and load factor declines above the system average. The negative story at the mainline operation is the same when measured against traffic in Mar-2010. While Peach is young and ANA's other LCC, AirAsia Japan, is yet to launch, the presence of traffic cannibalisation is evident. While this is not unexpected and ANA has planned for it, the level of cannibalisation appears to be above ANA's projections. It is a sign of the changing North Asia market, and a worry for ANA, which holds by far the largest share of domestic Japanese capacity – and plans domestic growth in coming years.

On 25-Mar-2012 it added twice daily Kansai-Nagasaki services. Specific breakdowns on the routes have not been given, but ANA has given group-wide result indications for the Sapporo and Fukuoka routes. Overall traffic increased considerably, validating ANA and Peach's ability to generate new demand with lower fares.

Peach's initial two destinations have nuances, with Sapporo served from the three Osaka area airports (Kobe, Itami and Kansai) and Fukuoka from only two (Itami and Kansai).

On the Sapporo route, the change in Mar-2012 traffic compared to Mar-2010 (ignoring traffic disruptions in Mar-2011 from that month's earthquake and tsunami) shows a drop in traffic from Itami, the region's main airport. A noticeable drop occurred from Kobe, one of the region's alternative airports, although all three have slightly different catchment areas and ANA conducts little pricing variation between them. Still, some segments of the market avoiding Itami may have elected to choose Kansai with Peach's lower fare option. Kansai-Sapporo showed little change.

The decline of ANA mainline passengers carried in the Osaka-Sapporo market in Mar-2012 measured against Mar-2010, which ANA did not disclose but CAPA estimates at approximately 7-10%, was significantly ahead of the 0.6% system-wide domestic decline. Load factor declines, of approximately 12% based on CAPA estimates, also outpaced the 5.3% system-wide domestic load factor decline ANA reported. 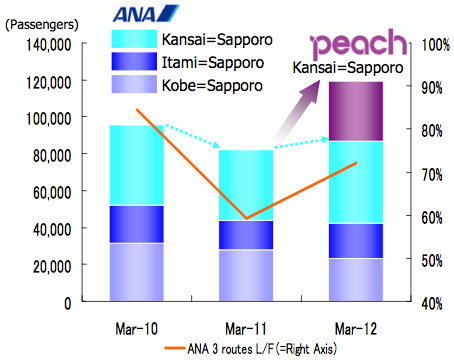 A similar but also different pattern is evident on initial traffic between Osaka and Fukuoka. ANA mainline traffic declined against 2010 levels (again ignoring irregularities in Mar-2011 from the natural disasters) with Peach growing the market overall.

Yet traffic from Itami showed less of a decline than on the Sapporo route, while Kansai traffic, which showed little change on the Sapporo route, posted a significant decline on the Fukuoka route. Net traffic in Mar-2012 was again down considerably and above the system decline. Load factors showed little recovery from Mar-2011 levels and were again down nearly twice the system growth rate. The load factor, as on the Osaka-Sapporo route, was above ANA's system-wide domestic load factor of 60.9%, although the trunk routes tend to perform better. 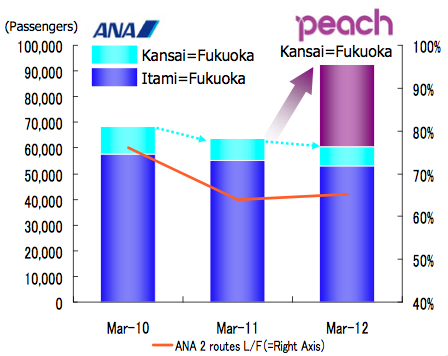 ANA expects cannibalisation, but must set a threshold

ANA is not ignorant to the fast changing dynamics LCCs will bring to the market. "We do not believe that there will be zero cannibalisation," the carrier said in Feb-2012. "Any demand shift or cannibalisation is acceptable as long as the Group revenue grows in total." What ANA does need to evaluate, however, is the implication of the effect – cannibalisation – it is content with and is already observing.

ANA's corporate strategy calls for it to grow mainline domestic capacity, of which it is already the majority holder. Japan Airlines, in comparison, with a smaller domestic network, will hold capacity flat and then shrink it. This gives significant concern in ANA's near-future strategy.

See related article: All Nippon Airways confident due to 2011 financial success but there are changes ahead