Despite the fact that oneworld’s current philosophy gives more importance to the individual member airlines, oneworld Managing Partner John McCulloch, told Centre for Asia Pacific Aviation that it is only a matter of time before member aircraft fly the oneworld livery.

Speaking before the Boyd Group International's 15th Annual International Aviation Summit, McCulloch said the alliance has a long way to go before it has a common fleet and operating specifications.

“I don’t think it will happen for some time but we are a step closer than we were last year,” he said, alluding to the recently launched joint business between American, British Airways and Iberia. “It took us eight years to put oneworld on an aircraft. Alliances don’t work like merged carriers but it is hard to fight a flying billboard. Right now, the customer relationship is with the airline, not the alliance but that is changing. Customers are already looking to alliances. They are beginning to think that way. We have to get on to a common IT platform. We’ll have to solve that because you can’t do it otherwise.”

He also said corporate customers were increasingly turning to alliances for consolidated network deals that include financial offers and incentives from individual airlines, additional rewards for oneworld umbrella deals and tailored global and local account management.

And, quite surprisingly, he also noted that regulators are now favouring the alliance scheme. Despite battling this very issue for years against intractable regulators who feared alliances were anti-competitive, he was shocked to have regulators come to him for advice on how to build metal-neutral selling and service.

He noted that this week, training begins to present a common face to the British Airways-Iberia-American Airlines joint business. “We need to start behaving like metal-neutral service providers,” he said. “The market is already moving our way. This is a premium business travelers game. Customers are already seeking alliance services and benefits. All but two of the world’s largest carriers are members and the three big alliances account for 70% of the world’s capacity with the rest split between low-cost carriers and unaligned legacies.”

Support is the key, he said. “This is not about trying to give everybody something. This is about giving a small group of people a lot. It is the global premium business traveller who accounts for 30-40% of the profits.” 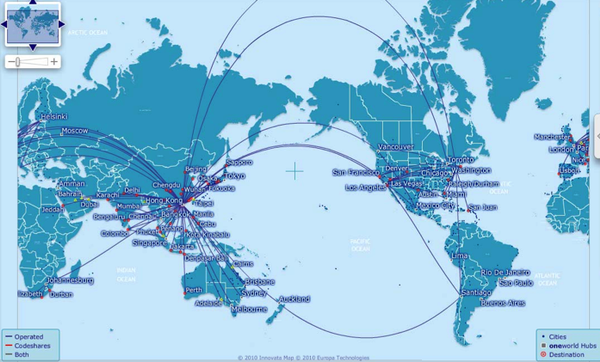 Hong Kong on all carriers 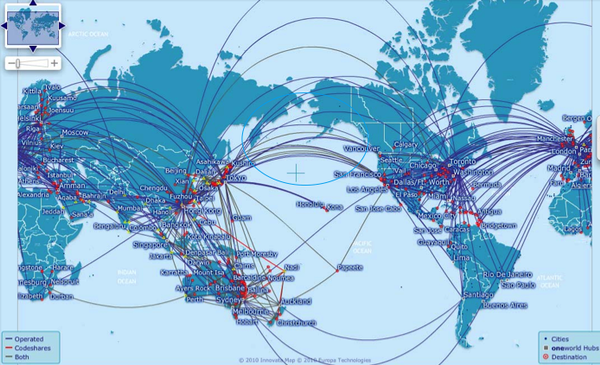 He also illustrated the difference between LAN as a stand-alone carrier and as a member of oneworld.

Santiago on LAN and affiliates 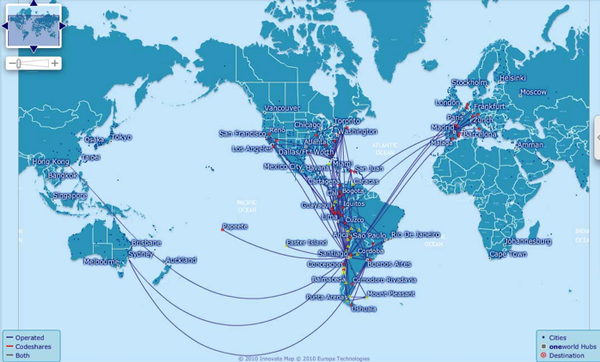 Santiago on all carriers 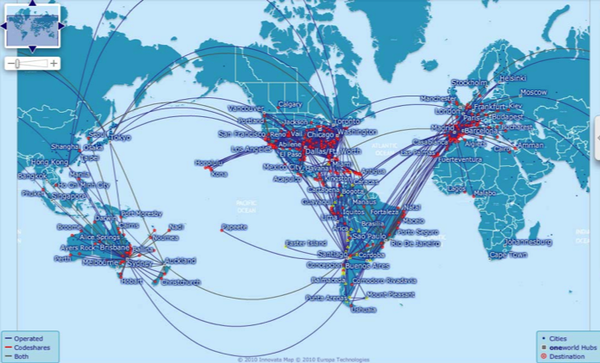 He also pointed to the Finnair membership noting it has the shortest polar route to Asia. 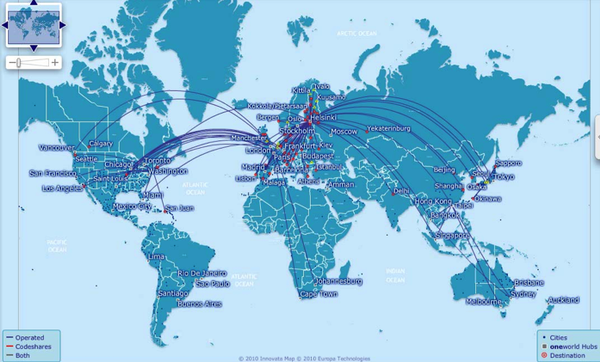 Helsinki on all carriers 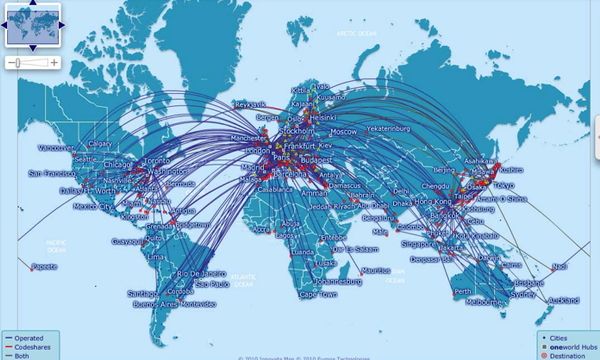 McCulloch noted oneworld missed two opportunities that would have strengthened the network: SWISS and Brussels, which went to Star after being acquired by Lufthansa. He also pointed to the failure to win over China Eastern but added while oneworld won, it lost on the individual desires of the China Eastern leadership which he called arbitrary.

However, the current gaps in the network were now being filled by S7 in Russia and Kingfisher in India as well as Air Berlin. He called Canada a “white space” for anyone but Star but noted Cathay Pacific’s and American Airline’s relationship with WestJet. “We have to work to do more there,” he concluded. “It’s not a huge market but is has 34 million of the most important people.”

He also called Africa a white space for oneworld but did not see any immediate action to fill the void, despite the fact that both Star and SkyTeam are heavily penetrating that market.

McCulloch noted an emerging profit centre – round-the-world fares – which brought in USD1 billion before the recession. “We’ve made it unique and simple to price,” he said. “We base the cost on continents visited rather than the miles flown of our competitors. It has generous stop-over allowances. It is the first consumer fare of any alliance available on the internet now.”

Revenue around the world fares

Expectations for the future are an acceleration of all plans from the three alliances. “You will see accelerated progress towards integration under ATI and joint business agreements,” he said. “You will also see expanding networks which are better coordinated for both the airlines and passengers. There will also be more joint fares and corporate deals, coordinated product offerings and cost reduction by co-locating facilities, joint procurement and sharing best practices. There will also be better coordinated customer service globally including transport support centres and disruption management.”

In response to a question on how oneworld would fend off the aggressive expansion of Emirates, McCulloch said oneworld is not interested in them nor is Emirates interested in alliances in general. “What we are trying to do with someone like Emirates is to make sure it doesn’t pick off carriers in our group,” he said. “British Airways and Kingfisher are far more exposed than other alliance members. Our carriers need to work together against being sucked up through the Gulf hub.” 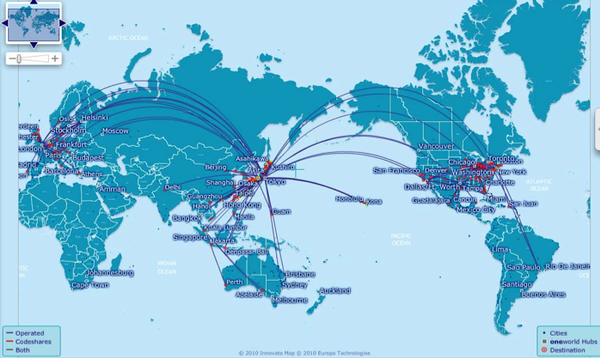 Tokyo on all carriers 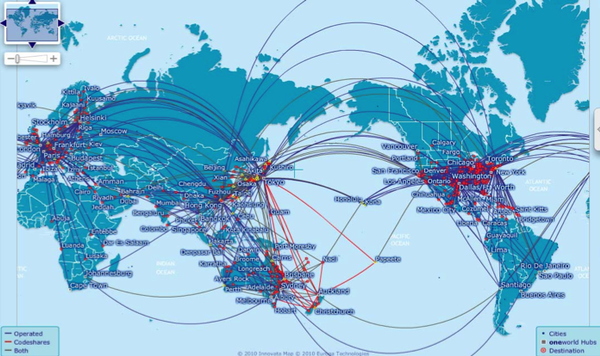 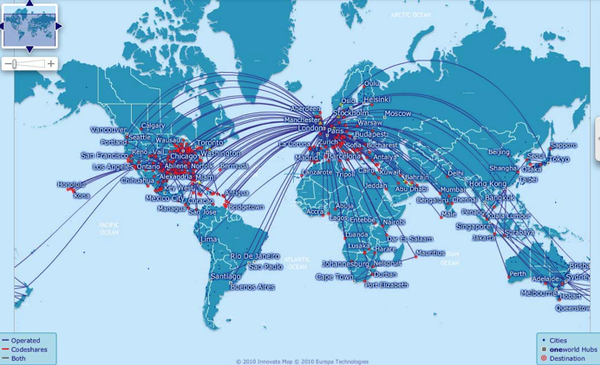 London / Manchester on all carriers 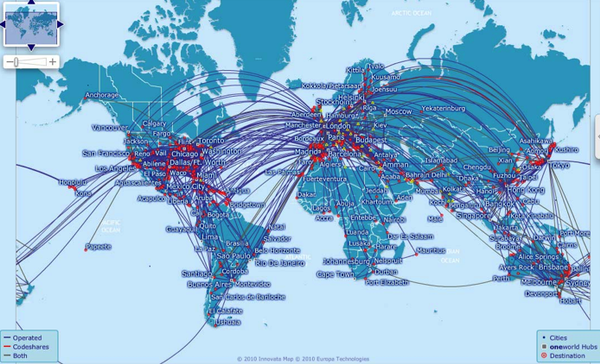