After the bad news, now for the bad news – oil prices traded above USD60 per barrel yesterday for the first time in six months. A weak US dollar drove yesterday’s spike, softening the impact a little. But increasing “green shoot” commentary on the global economy has also driven prices higher. This in turn is causing renewed speculation over higher prices, which become self-fulfilling. A sustained period of oil above USD60 per barrel would threaten the LCC segment, and throw the full service segment into further disarray. 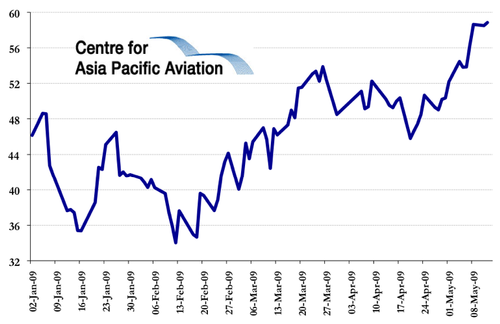 As oil prices rise, the big issue this time is that airlines are not in a position to reintroduce fuel surcharges or raise prices as they were during the previous oil rally, as air travel demand is extremely fragile, particularly at the premium end.

The conundrum facing airlines is epitomised by the struggling Japan Airlines (JAL). On 08-May-09, JAL applied for government approval to remove all international fuel surcharges, following the lead of All Nippon Airways and many of JAL’s foreign rivals. But just three days later, JAL applied to raise its international cargo fuel surcharges. The carrier clearly believes freight forwarders will wear an increase in surcharges, whereas passengers will not.

Latest forecasts from the World Tourism Organisation (UNWTO) predict international tourism demand to decline between 2-3% in 2009. It notes demand has deteriorated further due to the impact of the global economic recession. International tourist arrivals declined by 8% in Jan/Feb-2009. All regions have suffered from a decrease in demand in major source markets (with the exception of Africa and Central/South America, with posted positive results in the range of 3-5%). So far, Northern, Southern and Mediterranean Europe, Northeast Asia, South Asia and the Middle East are among the most affected sub-regions…At the same time, influenza A (H1N1) is starting to affect the sector and its impact is being closely monitored”.

In Singapore this week, former Qantas CEO, Geoff Dixon, stated, “this is the worst crisis I have seen in aviation in the past ten to 12 years. We’re not at the bottom yet, and premium traffic is being hit hardest, which is affecting airline yields”.

Malaysia Airlines Managing Director & CEO, Idris Jala, stated he did not believe the economy has reached the bottom, noting demand has been falling since mid-2008. He added, “second - and most airlines don’t like to talk about this - many of them hedged their fuel at USD100 when the oil prices were soaring, and now they’re stuck with over-priced fuel”.

For the hedged, higher fuel prices is cold comfort as revenues and yields struggle. For the unhedged, higher oil prices in a soggy demand environment is a recipe for financial pain. The airline industry faces an historic turning point.