Norwegian Air Shuttle's shares soared 11.1% yesterday (01-Jul-09), outpacing the 2.0% gain on the Oslo Stock Exchange. Reasons for the surge in Norwegian's share price are not immediately apparent. In 1H2009, the Oslo Bors gained 27.8%, against a 2.6% reduction in the previous corresponding period.

Also in Europe, SkyEurope’s volatility continues following last week’s announcement that the LCC has sought creditor protection, while easyJet shares were down 0.9% and Ryanair gained 1.2%.

In the Asia Pacific region, AirAsia gained 2.7%, while shares in SpiceJet, which this week reported a narrowing in first quarter net losses, slipped 1.0% as jet fuel prices rose on 01-Jul-2009. The carrier stated it expects to reach breakeven in 2010, when it will consider plans to commence international operations within the SAARC region, and to West Asia and South Asia. CEO, Sanjay Aggarwal, added that the carrier had a positive cash flow in May-2009 and Jun-2009 resulting from fuel hedging activities.

In the Americas, WestJet and Southwest shares were up, by 5.5% and 1.0% respectively. GOL's shares improved 1.8%, due to a gain in the Brazilian Real against the US dollar, adding to the 20% improvement in the BRL against the USD so far this year. The gain also came as the carrier agreed with two banks, namely Banco Bradesco SA and Banco do Brasil SA, to release co-branded credit cards. Under the agreement, the banks will purchase BRL252 million (USD130 million) of miles from the airline, with payments to commence this month. 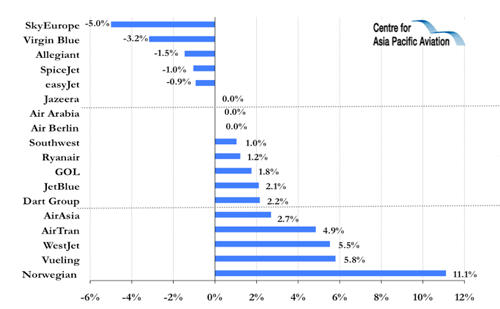