North Asia to Europe routes review: China garners the most seats and frequencies

Of the top 25 routes between North Asia and Western Europe, Hong Kong generates the most frequencies and seats, pushing China well ahead of Japan in terms of the capacity offered. Korea comes in at a distant third. Assessing and ranking service offerings between North Asia and Europe with the CAPA Route Analyser Tool, we find this region is also dominated by a number of key airports, with the traditional gateways of Tokyo Narita and Hong Kong now joined by Beijing as China’s ascendency continues.

Eight endpoints for each continent

In terms of frequency at each of the Asian endpoints, there are eight airports represented, four in China, which collectively are endpoints for 14 of the routes. 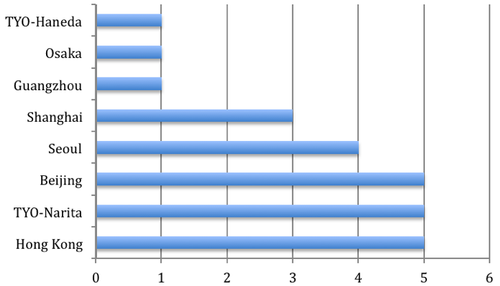 As was observed in our analysis of the routes between Europe and Southeast Asia, on the European end there is a similar concentration of service at the key hub airports hosting members of the three alliances. In this instance however, Paris, rather than London, has the lion’s share. 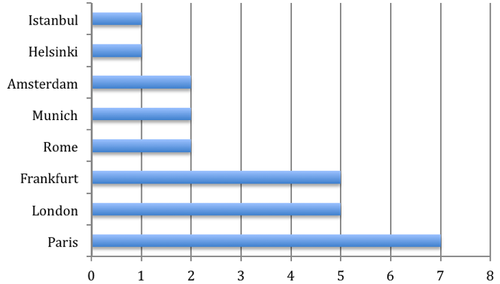 But when looking at frequency, a different pattern emerges than the one to Southeast Asia. In that case, only 16 routes had more than daily service, and number 25 (SGN-CDG) already had only six weekly flights.

To this region, the eight or more list extends to the 22nd position, with at least daily service operated on the top 49 routes – representing a far more dense concentration of daily connections between the two regions.

Limited ties to Spain and much of Mediterranean Europe

As shown by the following chart, China dominates service from each of the European countries except Turkey. 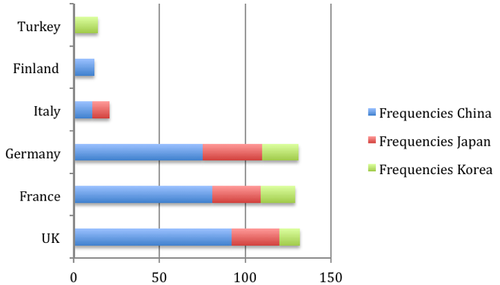 But, like the SE Asian example, the Iberian Peninsula is poorly represented, with five weekly services between Madrid and Beijing not appearing until position 55.

In terms of total frequencies, no other airport pair can match the service between London and Hong Kong with 61 weekly flights – far exceeding the top-ranked 49 services between London and Singapore that dominated the service to the south. The chart includes only the 22 city pairs with more than daily frequency. 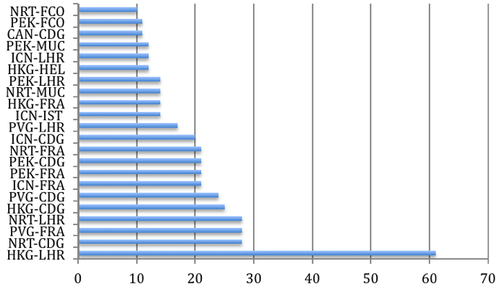 Finally, the balance of hub-to-hub services offered by the three alliances is slightly more equitable than was the case to Southeast Asia with the definition of “hub” having a greater inclusiveness. 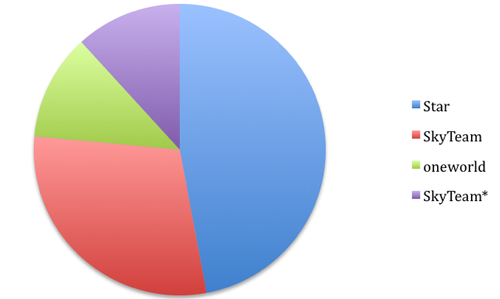 In Asia, unlike Europe, multiple airlines claim hubs at the same airport. Air China and China Eastern claim hub status at both Beijing and Shanghai and China Southern lists Beijing and Guangzhou as hubs, making for multiple alliance links. The same is true at Narita with JAL and ANA based at the airport, and Seoul where Asiana and Korean share the status.

While already ranked in second place, based on the number of present and pending Chinese members, SkyTeam should more than hold its own in coming years.

The SkyTeam category indicates flights between Paris and Rome and Tokyo, rightfully claimed as a Delta hub but with dubious value as a connecting point.

China, up and rising; Japan and Korea have less growth potential

The key component here is, undoubtedly, China – a nation still in the early stages of its global aviation emergence. As we noted in our study of the top 30 airports in 2010, Beijing had risen from position 49 to two in a decade, with Shanghai and Guangzhou leapfrogging in similar ways.

This is a trend well established and only likely to accelerate. Plus there will be additional Chinese cities appearing as endpoints. Xiamen, Hangzhou and Urumqi already appear among the list of 100 top frequencies, suggesting these and others will become more common inclusions as China’s international markets open.

Japan, beset with a lingering economic malaise and still coping with the string of natural disasters that have occurred, has recovered but will probably not see any huge expansion of European service as it is already a mature market.

Korea’s growth may find a different focus, as Turkish and the Gulf carriers capture a larger share of connecting traffic. Emirates operates a daily A380 from Seoul to Dubai, and Istanbul has double daily flights. These services redirect traffic destined to the Middle East, Southern Europe and Africa from traditional European hub connections.

With the exception of China, many Europe-North East Asia routes are mature markets – ones that we hope will age gracefully.