SpiceJet, India’s second largest LCC, is entering a new growth chapter after US financier, Wilbur Ross, decided to exit the investment at a profit. Stepping in at the height of the oil crisis in mid-2008, Mr Ross injected cash to help stabilise the airline through the ensuing global financial crisis and it is now positioned to launch an aggressive expansion phase.

Mr Ross told the Financial Times, “we simply feel that the management we installed has turned the company around and therefore it is ready for the next phase of ownership and expansion”. The carrier is considered likely to place an order for an additional 20 aircraft to double its fleet, as part of a renewed domestic expansion drive and push into short/medium-haul international markets. Four additional B737NGs will be added to the fleet this financial year (ending 31-Mar-2011).

According to the Financial Times, Kalanithi Maran, CEO of Sun TV Network, acquired a 37.7% stake in SpiceJet at the weekend, becoming the airline’s largest shareholder and ending months of ownership speculation. Mr Ross sold his 30% stake for USD127 million, while another investor, Bhupendra Kangsagra also sold his stake to Mr Maran.

Mr Maran will be required to make a mandatory tender offer from today to the public for an additional stake of up to 20%. The carrier is now expected to shelve plans to raise USD75 million through a sale of new shares.

Mr Ross acquired USD86 million worth of convertible bonds in SpiceJet in 2008 when the carrier was deeply loss-making. Mr Ross sold the stake in the now-profitable airline for INR45.25 per share, representing a discount to SpiceJet’s closing price on Friday of INR56.05.

SpiceJet’s shares fell 3.1% on Friday ahead of the announcement, on reports of the sale discount to market price. Kingfisher and Jet Airways rose 0.8%.

Elsewhere, it was a fairly subdued day for airline stocks in the region, with Qantas gaining 0.8% and Cathay Pacific easing 0.4%. 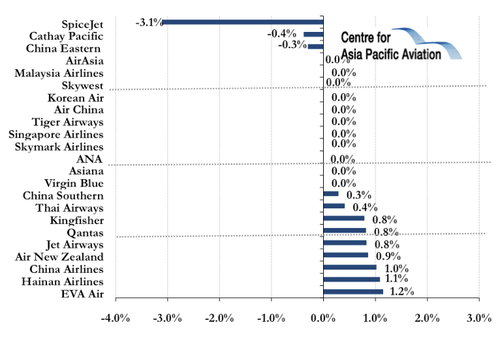