Airbus has been or is currently in talks with two Southeast Asian carries, Malaysia Airlines and Thai Airways.

MAS proceeds with A380 order; deliveries from Apr-2012

Airbus stated it would deliver the first A380 to Malaysia Airlines in Apr-2012, after the two companies agreed to proceed with the order for six A380s.

Malaysia Airlines CEO, Tengu Azmil Zahruddi, confirmed the agreement, stating: “We’ve completed our discussions with Airbus and will be taking the six A380s." In Jun-2010, the carrier said it was considering all options after Airbus fell behind its original delivery schedule for the aircraft. The CEO declined to divulge the compensation MAS will receive for the third delay in the A380 delivery, stating: "The terms of compensation don't allow us to disclose when and how much will be provided to MAS."

Meanwhile, Thai Airways stated it has commenced talks with Airbus on the possibility of acquiring up to 30 A350XWB aircraft and six additional A380s, to replace ageing A340s, B777-200ERs and B777-300ERs used on long-haul routes. The aircraft would cost USD9.12 billion at list prices.

According to a draft plan presented to Thai Airways' Board, the airline expects to have a fleet of 102 aircraft by 2026 with an average age of 7.5 years. The carrier operates an 88 aircraft fleet with an average age of 11.5 years. Airbus Southeast Asia Sales Director, Jean-Jacques Boissin, stated the earliest the manufacturer could deliver the first A350 to Thai Airways would be 2017.

Meanwhile, Boeing Training & Flight Services has been granted provisional approval for its B787 pilot training courses by the US Federal Aviation Administration (FAA).

With the B787 pilot training courses, pilots can transition to the new aircraft in five to 20 days, depending on pilot experience. B777 pilots can qualify to fly the B787 in as little as five days, given the high level of commonality between the two aircraft types. Boeing Training & Flight Services is currently working with the FAA to obtain provisional approval of the training devices at which point formal pilot training will commence.

Meanwhile, Air Lease Corporation (ALC) selected International Aero Engines (IAE) V2500 engines to power 30 of the 51 A320 aircraft ordered at the 2010 Farnborough Air Show, with deliveries scheduled to commence in 2011.

The engine selection represents the first engine order the new lessor has announced for its A320 fleet. The value of the order is more than USD500 million. The value for Pratt & Whitney at list prices is approximately USD165 million, with the value for Rolls-Royce standing at USD175 million.  Shares in Pratt and Whitney slipped 0.7% yesterday, with Rolls-Royce shares 0.5% weaker. 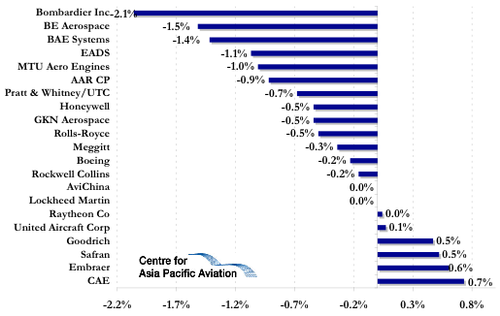 FLY Leasing CEO, Colm Barrington, speaking exclusively to CAPA about the prospects for the aircraft leasing sector, noted the signs of recovery in the airline sector are “quite positive”.

This is the result, he believes, of the combination of the number of available aircraft declining, a strengthening of lease rates and increases in aircraft prices, which "will continue for the balance of 2010 and into 2011." Fly Leasing remains interested in "new investment" and is "looking at improvements to our portfolio all the time, including acquisitions and disposals", according to Mr Barrington, who conceded that "current conditions...are not attractive for raising new equity."

Meanwhile, Air Partner was the largest decliner in the supplier/leasing market yesterday, with its share price slumping 5.3%. 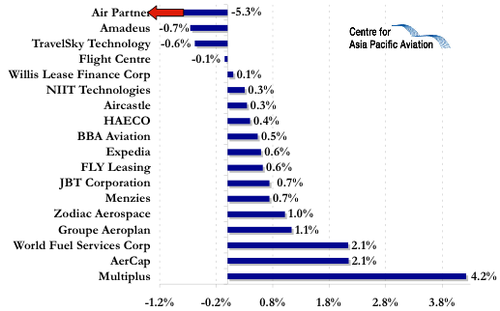