MAp: “The boards and management believe that MAp is well-positioned to continue to benefit from the key structural changes in the aviation industry such as the introduction of new aircraft technology, the growth of both low cost carriers and global airline alliances and the continuing liberalisation of air rights. In addition, the near term traffic outlook is strong. MAp’s active management model will continue to deliver a combination of aeronautical and commercial initiatives, together with an ongoing focus on costs. This will result in continued operational leverage and economies of scale,” Company statement. Source: MAp, 25-Aug-2010.

UK's unlisted Liverpool John Lennon Airport announced a report by RDC Aviation found the airport had the largest increase in passenger numbers of any UK airport in the first four months of this year compared with the same period in 2009. A total of 89,050 more passengers used JLA over the period, the greatest increase in passenger numbers for any UK airport, up 6.4% year-on-year.

In terms of scheduled passengers, Liverpool now moves into eighth place in the table of the busiest UK airports, with almost 1.5 million passengers having used the airport by the end of Apr-2010. To accommodate the growing passenger numbers, work on a GBP12 million development programme continues. Expansion of the airport's departure lounge is expected to be completed by autumn 2010. 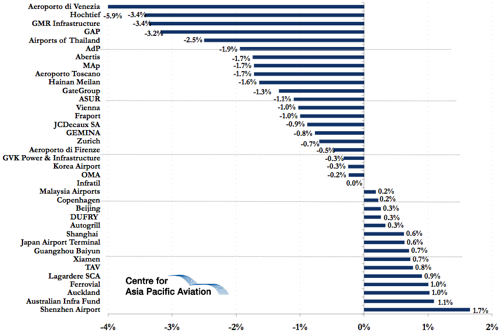