Lufthansa still Christmas shopping. Will it be a happy new year for SAS?

Rumours that Lufthansa is back in the market for SAS are still flying. Copenhagen Airport and SAS are watching share price rises, as investors speculate on the news. With the ink not yet dry on the purchases of Austrian and bmi and the establishment of Lufthansa Italia, this would be a challenging step.

But could Lufthansa really be serious? Even with the most jovial of Weihnachtsgeist, reason would suggest that this is surely one purchase that could better wait until the January sales.

As Lufthansa's shade of orange moves sunnily across Europe, the reach of the carrier in geographic terms apparently becomes overpowering. (The orange is actually yellow: Pantone 1235. The carrier with typical thoroughness, describes all of its corporate colours on its website. Lufthansa also uses its proprietary typeface Lufthansa, which is based on Berthold Helvetica)

If SAS were to join the fleet, the light becomes nearly blinding.

Air France and KLM are surrounded and British Airways is frontally addressed on its home territory. And the Pantone 1235 is also planted on JetBlue, across the Atlantic; Lufthansa has a 19% share in the US LCC.

Is this over-reaching? Well, SAS, with its very special characteristics, could just be the last straw in terms of being able to manage a network of managements - even if CEO Mayrhuber does look on it as a collection of brands, rather than mergers. A bit like collecting stamps, but with bigger stakes. 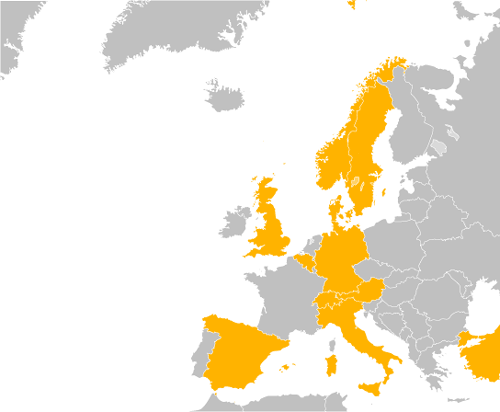 Although this map of Europe shows Pantone in Spain, there is little likelihood that Lufthansa would want to keep Spanair, if it did buy SAS. So an early move would be to find a buyer.

There has been no further publicity about First Mile Investments' proposed foray into Spanair. SAS, its owner, has made no announcement about any discussions, so it may be that First Mile is merely window shopping. IF Lufthansa were to make divestiture a condition of its purchase, that would put SAS in a firesale position - which would not make its government investors happy in post-purchase times.

Cheap buys. But what about the losses?

It is true that Lufthansa is not dipping too far into its deep pockets for all of these purchases. JetBlue's 19% cost USD300 million; Brussels Airlines' 45% was EUR65 million (and an option for the remaining 55% at a similar price); bmi was a lot more expensive, but came with valuable slots; and Austrian comes cheap too - with the Austrian government hoping to put in EUR500 million to offset its airline's debts, if the EU will allow it too.

But most of these airlines are losing money - and lots of it. Sir Michael Bishop is not one to give away a bargain and bmi is not a pretty sight at present, nor for the medium term. JetBlue is leaking, Austrian is bleeding and Brussels is hardly a winner. This all becomes Lufthansa's legacy.

Things will start to get a bit testy in board meetings if those losses start hurting the bottom line by, say mid-09. Swiss has been an almost unqualified success. It was a restructured airline, which was always a world leader in quality anyway.

But Mr Mayrhuber's stamp collection will have no such high standards, nor will it be seamless for many years at best. Might be time to put the credit card away and take a couple of weeks off. 2009 is looking dark and cold.